someone who really likes Swastikas

At least they can claim to be really into Indian spiritualism or like the stonework mouldings at the back of the Royal Academy (which I had never noticed until it was pointed out last week). Even then they would have to be persuasive.

If him being black is what makes me funny to someone, rather than something specific to HIM (the ear thing, the pigeons, etc), then it’s just racist.

That’s the underlying thing to me. The idea that dressing as Mike Tyson includes darkening your skin comes from a racist place. It’s the same as when people get upset that a super hero is cast as an actor with dark skin when the original hero was pale, or getting angry that Hamilton has non-white actors play white people from history.

(Note: Complaining that white people play people of colour is really a complaint about representation, not a racist complaint that characters and their actors need the same colour skin.)

A third, Mighty Boosh’s Spirit of Jazz (Noel Fielding) was Baron Samedi and given a pass at the time, but in retrospect is wayyyy into blackface and I wouldn’t put it on at parties.

I would give Noel a pass on many things but those moments are a bit cringe.

getting angry that Hamilton has non-white actors play white people from history.

Which of course is not entirely “white people” history, it’s trans-atlantic history, American history, Caribbean history, political and economic history, and none of that is the domain of whites. But I agree about the racist backlash against Hamilton.

Complaining that white people play people of colour is really a complaint about representation, not a racist complaint that characters and their actors need the same colour skin.

those moments are a bit cringe.

Yep. I love the Mighty Boosh and Noel Fielding, but cringe indeed.

Thanks for the educatioin. I’ve learned something today.

We should all try to learn something everyday, cause that’s how we grow and become even better people!

When my son was 8 he wanted to cosplay as Shadow/Dark Link from the Legend of Zelda series, but I told him NO on that. I explained to him the history and problem with white people who put on black face makeup. I helped him understand that when people look at him they won’t see him for the character he’s trying dress as, but will be first wondering if he’s trying to be offensive.

Some people might think that was something I shouldn’t have said no to, but I don’t regret making that call, it provided a teachable moment for my son about something he wasn’t aware of, and his first comic con was a great experience for him in the end. He ended up going as Link from Breath of the Wild instead.

*And for those who say my son could have worn a Dark Link outfit and avoided the black makeup altogether, my son is on the Spectrum and he was hyper-focused on going for a specific look. A solid “No” answer and solid reasons why he couldn’t was the best way to go in this situation.

I was not looking forward to halloween the year Moana came out. Fortunately my two-year-old just wanted to be a witch.

Hey, @Melz2 agrees with you on it, so there’s that!

But again, I’m just one individual person and I don’t ever deign to speak on behalf of all “my people.”

The idea that dressing as Mike Tyson includes darkening your skin comes from a racist place. It’s the same as when people get upset that a super hero is cast as an actor with dark skin when the original hero was pale, or getting angry that Hamilton has non-white actors play white people from history.

Long, long ago, when I was a tween, I practically worshiped a college football player who played for the U of Michigan, Anthony Carter. I dressed as him for Halloween. At no point did it enter my head that I needed to match skin tone.

Why is this still a thing? Do more ruddy-complexioned white people wear pale makeup when they dress as a Tilda Swinton or Orlando Bloom character? No, they don’t.

The worst thing with the Olivier Othello thing is he did it again a year later playing a Sudanese rebel leader in Khartoum. Its fucking terrible but the only time you see Charlton Heston and Laurence Oliver in the same film. No scenery was left unmasticated 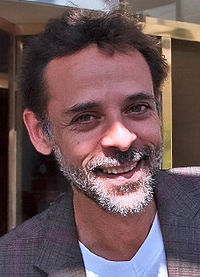 is there ever a situation where it is OK for a white person to put on brown/black makeup?

It seems to me (just speculating) that it could be acceptable outside of a racialized context - that is, if the makeup isn’t intended to imitate (and doesn’t come across as trying to imitate) racialized characteristics like the skin of black/brown people. So never “dress up as black”.

But for example, a soldier might put on facepaint to camouflage and protect their skin, not to portray people of color. Someone wearing blackface is darkening their skin in order to portray a black person. Regardless of any other intentions they may have, that in itself is pretty much guaranteed to be hurtful and offensive for a lot of different reasons.

This sucks for a few reasons.

2001 was 18 years ago. Recent enough for him to have a fucking clue and not do something that stupid. The 90s were even longer, which does not make any of it OK.

That said I want to go a bit easier on kids in high school as they are basically morons and I wouldn’t personally want to be accountable for everything I did and said at that age. I would not want some of the stupid things I said to come back on me now (never racism, but small town 80s Alberta was a deeply homophobic world where it felt like basic survival to at least stay silent when others were awful - no excuses but it didn’t take me long to learn better).

I don’t know how to vote in this election. Our riding is currently Liberal and has a decent candidate. We had a hard right backbench Con in the last Parliament, I don’t want to go back to that. I’ve been giving money to the NDP for 20 years but they haven’t even bothered to pick a candidate yet, with 4 years to prepare. And I’d love to vote Green but not at the expense of seeing a C get elected, G will not be elected in this riding, at least not yet).

This racist shit does not help.

2001 was 18 years ago. Recent enough for him to have a fucking clue and not do something that stupid. The 90s were even longer, which does not make any of it OK.

I was in high school in the 80s and I had enough clue that it wasn’t ok.

Me too, but I was weak on some other fronts and am looking at my own teenage kids and hoping they don’t do anything stupid that will come back and haunt them.

Now, for a PM we might expect a higher level of awareness, I’m just not seeing it from any of the candidates.

Note: I am not giving him a pass. Also, he is the same age as me so likely graduated high school in 89 or 90, which means he was an adult in the video - not good in my opinion.

I am however struggling with what to do with the new information. We in the west have 5 parties to choose from - L, C, G, NDP, PPC.

L - Blackface, Pipeline, SNC, axing PR.
C - more racists exposed every second day it seems. Certainly the ancestral home of racists in this country. On each of the above (they would have done worse or nothing at all).
G - Ok but hopeless in this riding, most outside of Victoria/Gulf Islands.
NDP - Also OK but hopeless, certainly in my riding.
PPC - fuck those racist guys, it is practically the central plank in their platform.

I was already on the fence about who to vote for, this doesn’t help at all.

This is what really irritates me about this mess, that it’s made the election for Canadians even more a case of least worst option, and it’s opened up Trudeau for some disingenuous attacks from the right. I’m not totally up on Canadian politics, but he still might end up being the least worst option on the ballot, even with this.

I feel like Canadian politics lags behind American politics. Whatever idiocy we accuse Americans of we visit on ourselves in short order (with a very thin veneer of respectability pasted on the front).

That is such a cool connection for an actor whom I already admired the heck out of.

He was great in Battlestar Galactica.