Congratulations, QuickTake™ is back. We already had a new SuperDrive™. So when do we see some new feature or product called HyperCard? Or ImageWriter? Cocoa Touch?

P.S. And of course we’ve now got Bionic: 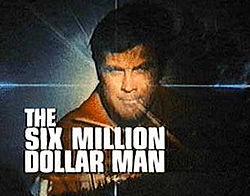 I would love to be proven wrong, but I’m expecting another iTerate, and not an iNnovation.

The rumored “one more thing” is a Tile-like tag locator, but one that will be able to much more accurately pinpoint where the tag is, which strikes me as potentially pretty useful. We’ll see if it gets introduced today. But yeah, the “now with even more lenses” iPhone is not exactly making me want to open my wallet.

EDIT: And that’s apparently a NOPE.

so, really there is nothing new in the phones - they just keep making the camera better.

I was hoping for a return to the old rainbow logo. Guess I’ll have to make my own.