The fact that Halford noticed it and was able to pinpoint the guy with the flash kind of proves otherwise.

I take the occasional picture, and I do like some pics on the walls, but seriously - has anyone ever gone back and watched that shitty video of the kids Xmas pageant even once?

We still haven’t printed up our wedding pictures (19 years ago). I have a row of old computers in my garage that only continue to exist because they have pics on them from whenever that I will never really get around to dealing with.

So just watch the fucking concert already. Nobody wants to watch your video afterwards, least of all you.

@kidthorazine You seem to be suggesting that Halford could not have seen the camera if it wasn’t flashing. It proves nothing whatsoever. A lit candle can be “noticed” from miles away. Halford could easily see the camera due to his stage lights flashing off any shiny part of it.

While the article states that Halford objected to a camera flash, YOU CAN’T SEE A CAMERA FLASH and JP’s twitter only says something vague about “physically interfering” and nothing about a flash. The article is pure conjecture.

In the video you can see Halford wind up to kick the phone well before he follows through. The reasonable conclusion is that he decided to randomly go “rock star” and his twitter spox manufactured language to justify it.

also, i want to see the video from that dude’s phone. it’s only a matter of time.

Assuming they get it back, it would be the most metal moment of their lives, probably.

Yeah, I still tell people I some times trip at concerts so they think I am cool.

Story about Judas Priest and no one has posted Heavy Metal Parking lot yet?

Fine, I’ll do it. I suppose I should have a decent pun or something, but I don’t. Just watch this if you’ve never seen it before, it’s an amazing piece of anthropology.

LOVE Heavy Metal Parking Lot! Also, my SO went to that show in Landover.

The band’s tweet makes no sense. Obviously they’re not ok with people “filming all they want” as that’s what this person was doing and they got kicked for it. Also there’s nothing in the video that indicates the person “physically interfered” with the band’s performance.

I have to say, while I do take some pics, and maybe a short video, there are too many people who fail to live in the moment and are recording so much it is distracting to the audiance as well. Hopefully it won’t be that bad at My Life with the Thrill Kill Kult concert tomorrow.

I was at a Tragically Hip show many years ago where I kept having to crane my neck around some guy’s camera to avoid watching the show second-hand. Funny thing was, I complained about it in an online forum and one of the regulars there apologized and said it was probably him (and was sincere). Of course, there was also a little shit who said, “what about all of us who weren’t lucky enough to be able to go to the concert?” I thought having bought a ticket was enough to entitle me to actually see the band perform, but I guess not…

On a related note, I live in one of the world’s most heavily visited cities. A city that is on a lot of people’s bucket list. For a lot of those people, it’s probably the only time they’ll ever go abroad in their entire lives (though I admit I may be judging books by their covers when I say that). And I never cease to be amazed by how many people will walk up to an iconic, world-famous site, turn their backs to it, spend an eternity trying to get the perfect selfie, then simply walk away. Even I, who gets to see so many of these things on a daily basis, occasionally make a point of stopping, having a good look, and reminding myself of where I am.

Then I kick someone’s phone into the river.

Using a flash? Time to go metal on ya!

I AM a well-adjusted adult! Science says so! 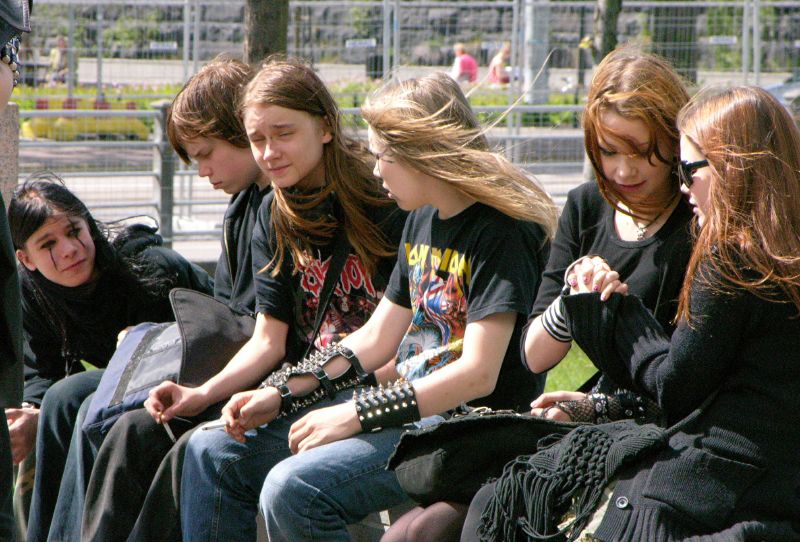 In the 1980s, The Parents Music Resource Center (PMRC), an organization co-founded by Tipper Gore and the wives of several other Washington power brokers, launched a political campaign against pop music, hoping to put warning labels on records...

Oh man, you would never survive a normal mosh pit, reality would invert for you

Respect for the band’s reaction. Ultimate respect for actually crediting the photographer in their Tweet!

It says more about my misspent youth than you, but I was expecting the first half of the sentence to be followed by an LSD story.

This might be the most badass thing a performer has done to an audience member since a 1972 show where Karen Carpenter punched a guy in the throat who was charging the stage.

Oh, come on. You would KILL to see that video.

Never seen that before and man that was a trip!

PBR is standard fare, a slight step up