There are two people in this world I love more than anyone when they play a Tele - Prince and Keith Richards.

Except that in the case of the song, I feel the tension between object/admirer is based around very superficial and juvenile notions of beauty. Most of the lyrics center on social stature or the outward appearance of the object; nothing is said of personality.

My favorite Radiohead cover is Reckoner ala Gnarles Barkley:

Such a powerful voice

Well maybe I’m the only one who thought this performance stank. I love Prince, generally, but he wasn’t even trying.

TBH, that album has much stronger tracks. The versions of Idioteque and Exit Music for Film are great.

Introduction To celebrate the 10th anniversary of Radiohead's OK Computer we've asked some of our favorite musicians to participate in a song-by-song covers compilation. Indicative of the album's continued importance, each invitee jumped at the...

Well maybe I’m the only one who thought this performance stank.

Well maybe I’m the only one who thought this performance stank.

Thank you both. I needed to see that twice!

i love how he’s just aloofly lurking and comping along through the other performers parts, as if he is in any way inconspicuous in that red hat. the expression on his face is like “oh, y’all think Petty is good, huh? you like Lynne, is that it? just wait, motherfuckers, you’ll see. just wait.” and then he shreds them all into oblivion.

you can see by their expressions that they all know how it’s gonna pan out, too. I mean, presumably the pecking order was established in rehearsals, but still.

At the very least, no DMCA takedown ass-hatery, at the most, a million times better than anything Prince has turned out in decades

I was trying find the video of Screwdriver/Bambi on Jimmy Fallon’s show which is proof that Prince is the second coming of Jimi Hendrix, but unfortunately it seems the videos have been taken down and thus I concede the points about copyright asshattery.

I like Prince and acknowledge he is an asshat about copyright (or at least he has been in the past).

I saw that one, it’s better than the also-good SNL performance he did a bit later. in both, he’s a fucking monster; as a rock fan and a Prince fan, he was just nasty.

that performance is tainted, though. when he tosses the guitar at the end, you’re like “that’s badass!” except on a later show, Kirk–the Roots’ guitarist–explained that Prince had borrowed one of his favorite guitars for the performance. and then Prince broke it. on purpose. smh, fam. 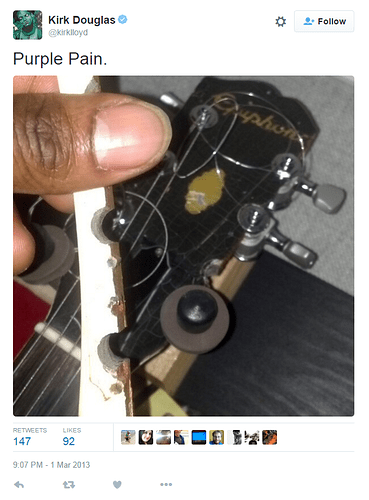 Would you be so kind as to expand your list to 3?

Jimmy Page for sure. Just not as common an occurrence. Which is understandable considering he is known for the Les Paul, and owns two of the most iconic original Bursts in existence…

I have a lot of love for Keith, though. He’s one of those players where it SOUNDS simple enough, but in reality, it’s not that easy to get right. I’ve heard a lot of people cop Page perfectly - I’ve NOT heard a lot of people that can cop Keith’s licks/playing. Even in his advanced age and physical condition, it’s pretty amazing to hear what he does live on stage. He can somehow almost completely rework his rhythm work in a song, yet it’s still perfectly recognizable. Charlie follows Keith and it all works. And he and Ronnie work together in a special way.
Speaking of Ronnie, we went to the show on this last tour and he fucking killed it on lead. Holy shit. Especially on Can’t You Hear Me Knocking. Jesus.