This “it’s funny because it’s true” attitude is what allowed Bill Cosby to rape dozens of women before anybody came forward as well.

Seth MacFarlane has the creepiest, fakest, cheesiest smile in showbiz. He looks like a human Al Hirschfeld drawing.

With so many ‘missing stairs,’ one has to to wonder how some industries remain functional at all. 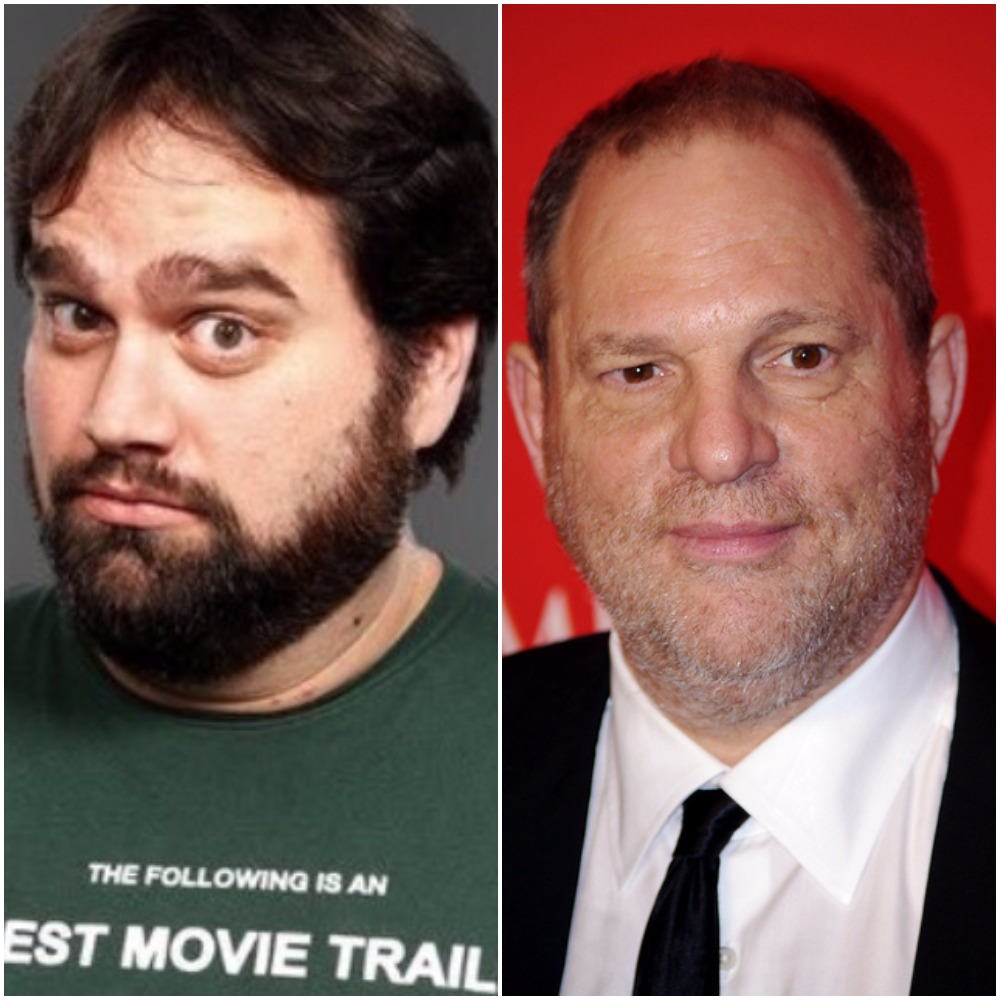 Men of Hollywood, Where the F*ck Have You Been? Firing Predators Is Only the...

There's been some good news coming out of the fight against systemic sexism in pop culture and media in the form of two notorious sexual predators being fired from the companies they helped build. However, as Rose McGowan would like to point out,...

Earlier today, a fan asked Kevin Smith on Twitter his thoughts about the Harvey Weinstein thing, a poignant question when you consider that Smith owes the entire beginning of his career to Miramax. He replied:

He financed the first 14 years of my career - and now I know while I was profiting, others were in terrible pain. It makes me feel ashamed. https://t.co/T0hInW7EqJ

Seth MacFarlane has the creepiest, fakest, cheesiest smile in showbiz. He looks like a human Al Hirschfeld drawing.

MacFarlane has long been extremely frustrating to me. He clearly has loads of talent but seems to continually squander that talent away on un-funny lowest common denominator bullshit.

Isn’t that his entire thing, though?

Except people had been coming forward, for decades. But they were women, not comedians.

Weinsten really needs to get screwed over publicly and legally.

On a different side of this I find it really funny the alt-righters that latch on to him like he is some sort of left icon everybody looks up to. The same people that excuse Trump of essentially the same shit.

Interestingly enough, The Orville is some quality entertainment. Even with the dick jokes.

I also think he’s quite talented. In particular for nailing broadway/musical bits in his shows, and i’ve been waiting for him to stop pussy footing around about it and actually make a musical. Either on the stage or on screen. I think he would make something worthwhile.

“No one ever went broke underestimating the intelligence of the American public”
-H.L. Mencken (paraphrased)

It’s not that I can’t enjoy dick jokes, toilet humor, or any manner of vulgar/tasteless/inappropriate humor – hell, I can even enjoy the MacFarlane-brand of non-sequitur humor. It’s just when that’s all you do, it gets quite old.

It’s hard not to compare him with Trey Parker & Matt Stone given they have all built careers on pushing the envelopes of vulgar and tasteless humor. Yet, somehow, Parker & Stone have managed to keep their schtick fresh after all these years versus recycling the same gags over and over again (which come to think of it was lampooned quite heavily on South Park).

Oh, but see, women are worthless, so who cares if someone AWESOME like Weinstein took advantage of his position to get some? /s

So, he wasn’t raping women in a back alley.

But that’s the only REAL rape… every other time, she’s “asking for it.” /s

I’ve railed against McFarlane and compared him to the South Park creators more than once. And i am honestly a fan of him, and as you say it’s disappointing that he doesn’t seem to have any real ambition other than using the same shtick over and over… just in different settings. Trey Parker & Matt Stone on the other hand have shown to be willing to challenge themselves to do all sorts of things.

For some reason hats come to mind in this discussion. “I don’t understand how any male can go bare-headed in public in the third millennium without expecting to encounter someone criticising him for not wearing a hat.”

And what’s with all the outcry against slavery these days?

That’s the same gentleman who was “tired of all the feminist chest beating” in a post about why the hell it took so long for a Wonder Woman full length feature film to come out.

Clearly his trolling hasn’t improved at all; kinda makes me wish there were Razzies for piss poor attempts like there are for shitty movies.

Despite the dick jokes, I’m enjoying the Orville more than I thought I would. Sure, the humor’s pretty lame, but overall the show feels like Next Generation Trek with the serial numbers filed off. It’s not perfect, but I’m intrigued enough to keep watching.

Dick jokes or any other kind of juvenile body humor isn’t the end all, be all litmus test for what’s funny or entertaining; but like Grey Devil said, when that’s all you have it gets old real quick.

I don’t troll at random, I just like to expose some alternative viewpoints…

No wonder Trump is bothered non-stop by late night comedians