Watch: Small plane crashes into tree, then cartwheels to the ground

That was an expensive breakfast.

Yeah i was going to say… flying an airplane… to get breakfast. I am not criticizing the gentleman for being a pilot or flying recreationally, or what have you. But definitely sounds like a first world problem seeing a headline like that. 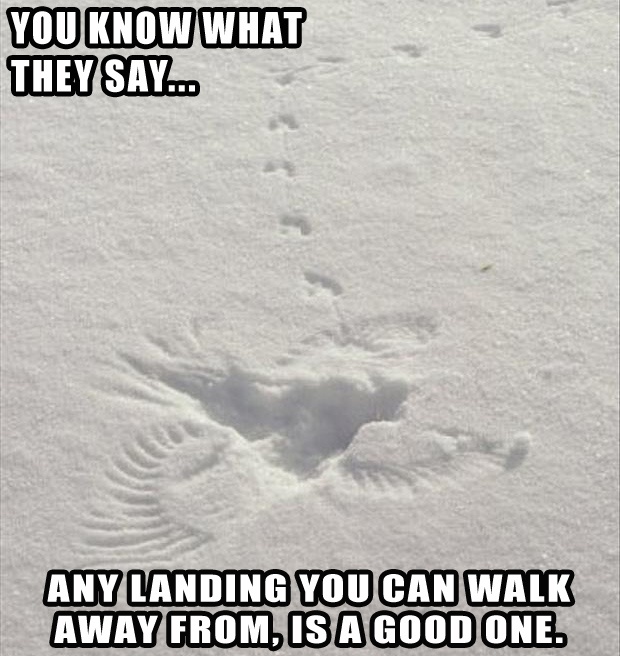 I’d have jumped out of the plane with jazz hands yelling, “The Aristocrats!”

Uh - that’s a hawk or maybe an owl getting breakfast, not crashing.

You couldn’t ask for a better way to hit a tree as these things go. He’s already stalling when he hits the first tree – bounces into the next one at the very top and drops through the branches. About as low speed an impact as I can imagine in that circumstance.

I like how he managed to line it up perfectly with the car next to him. Now that’s a parking job worthy of Ace Ventura.

I suspect there may have been purpose here - if your (small and slow) plane is stuffed and unwilling to fly, and there is nowhere clear to land, you flop it into a tree canopy to cushion the impact.

Here’s a good example of it. 4 guys, only one serious injury. Everyone walked away.

points off for the approach, but otherwise a perfect 3-point landing.

He should switch to a paramotor.

Some people will do anything to park in the shade on a hot day.

80-year-old pilot
had only minor injuries.

Incredibly lucky, thanks to the tree, who was less fortunate. I hope it survived the decapitation.

That was an expensive breakfast.

My pilot friend tells me such a meal is called a “$150 Hamburger” (or omelette, in the present case). You take a plane for a quick trip to another airport for a meal. Plane rental + gas + fees + hamburger = ~$150.

It’s usually more about logging flying time in pursuit of licenses or qualifications. The two times I was lucky enough to be a participant, the hamburger was not worth the trip. But I love small plane flying, so I win!

I was going to say. As crashes go, this is about like tripping over the cat and landing in the sofa cushions.

First, he loses most momentum to bendy tree branches, then converts the remainder into rotation that puts most of the impact on a wing and the after-body, sparing the cockpit almost entirely.

More of a cusssh landing than a crash. (-:

Well, that went better than expected.