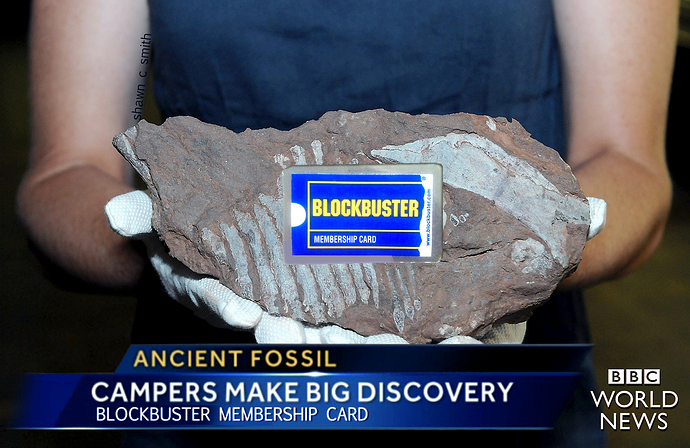 Today, there’s only one Blockbuster Video left on the whole damn planet, located in Bend, Oregon.

How did it survive in Bend? I’m guessing since Bend is close to a lot of rural and mountainous communities that internet isn’t as available, as cheap, and as fast?

This theory makes little sense, however; the town of Prineville, OR is a mere 40 miles from Bend, but it’s got a vast fiber optic trunk line running through it. Tire and auto-repair purveyor Les Schwab, based in Prineville, saw the future and it was p̶l̶a̶s̶t̶i̶c̶s̶ fiber optics! The company invested heavily in fiber and the town now boasts of Facebook and Apple data centers.

And it’s all just smack dab in the middle of the vast Oregon high desert.

REDBOX had more locations than Blockbuster in 2007 so it was not just Streaming Services.
There were also “Blockbuster Express” Kiosks that were like REDBOX but they just licensed the Blockbuster name and no other connection.

Yes. And REDBOX is still very much a thing. Plenty of people don’t have good enough internet, TVs, or computer skills, or simply don’t want to pay the monthly fees for streaming services. But in that case redbox is way more convenient since you go to the grocery store anyway, while dramatically reducing operating costs.

Don’t get me wrong, I loved browsing at the rental store when I was in high school and college. But as an adult or if I were too young to drive the convenience of streaming or redbox is going to outweigh the fun of going to blockbuster almost every time.

What does the corporate structure of a single Blockbuster look like? I imagine the brand still retains some value, but there’s no way it supports a full c-suite.

Ok, apparently the IP is owned and licensed by Dish Network, but I can’t imagine they get involved in the minutia of one location. Maybe they just retain a perpetual license and operate independently.

They weren’t kind
They didn’t rewind
And now they’ll be fined!

I’m most amazed at how someone got this data.

What does the corporate structure of a single Blockbuster look like? I imagine the brand still retains some value, but there’s no way it supports a full c-suite.

Its a franchise. You can run a franchise licensing organization for basically nothing if you want to (or have to).

I’d be really interested to know the tenancy history of ex-Blockbuster locations. Does another business move in immediately and thrive, does one business after another cycle through the location, are they just empty abandoned stores forever showing signs of Blockbuster branding, were they demolished? Much as it’s fun to post fossil memes, this is part of a much larger story.

the closest one to me first became a state owned liquor store, and is currently an urgent care

How did it survive in Bend?

One would think torrents had a hand in this as well.

Ah, of course. Still, I’m would think there would be some sort of standards and practices oversight at the corporate level. Maybe just a lone zombie employee who calls once a month.

There’s still money to be made in video rental, just not enough to satisfy Wall Street vampires. Privately-held Family Video has managed to stay in business, but they tend to own their real estate and will often partner with other businesses.

Amusingly, I’ve seen them move across a street into the former Blockbuster space.

Good riddance. There was nothing joyful about the video rental experience. At best you got to see the movie you paid for after several minutes of FBI warnings. On the other hand, there was:

Nostalgia is sometimes warranted. With video stores, not so much.

One would think torrents had a hand in this as well.

It’s been pretty soundly shown that the heaviest pirates tend to be the biggest consumers of legitimate, paid content, as well, on average. I’d say what killed Blockbuster was digital distribution; they could never hope to match the almost negligible distribution costs of their digital competitors, and thus their prices to the public.

I can still remember the last time I went in a Blockbuster. In 2000 I crashed my motorcycle in front of my building on Houston St in NYC (Red Square) and after I was released from the hospital (2.5 weeks later) my only real outings were really slow walks to the bodega and to the Blockbuster - it was actually in my building with an entrance about 10 steps from the front residential door. Rented and watched all the Sopranos - some of them twice since the painkillers played hell with my attention span.

Good riddance. There was nothing joyful about the video rental experience.

The best though, the absolute BEST, was being the only white guy browsing the back of the Asian grocery for bootleg Hong Kong VHS tapes. Good times!

Blockbuster, not so much. I remember once raving to some friends about how crazy this new Abel Ferrara movie with Harvey Keitel is, you gotta see it, amazing performance, hell yeah I’ll watch it again. We go to Blockbuster, come back, start the movie, and soon I’m like wait, where’s the shot with his junk hanging out? Where’s the part where he jerks off on the girls’ car? Then we notice the box says Bad Lieutenant - Blockbuster R Rated Edit.

30 years, in 30 years then went from nothing to the absolute top and then back to nothing.

How do you deal with something like this, rationally, psychologically, emotionally? What goes through your head when you build and empire and then it crumbles to dust before your eyes?

It’s central Oregon, so it’s tinged with racism rather than irony.