Originally published at: Watch these door-to-door missionaries get scared off by someone's gay doormat | Boing Boing

Wouldn’t you think they would be more concerned about those poor, hell-bound people? Or are they just taught to find the people who will succumb to their blandishments?

Huh, if I’d known it was that easy to get rid of these proselytizers…
My mom used to make us hide when we saw them coming down the street

My mother (rest her soul) used to keep a supply of Catholic literature near the front door, so when the JW’s came calling with the Watchtower she would take their handouts and give them hers. Took a while, but eventually they crossed our house off the list.

reacting to a doormat like a vampire does to garlic.

Remembering all those classic scenes of vampires slowly turning away, shoulders slumped in dejected resignation. 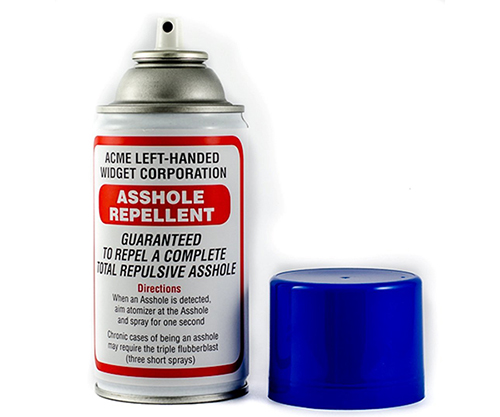 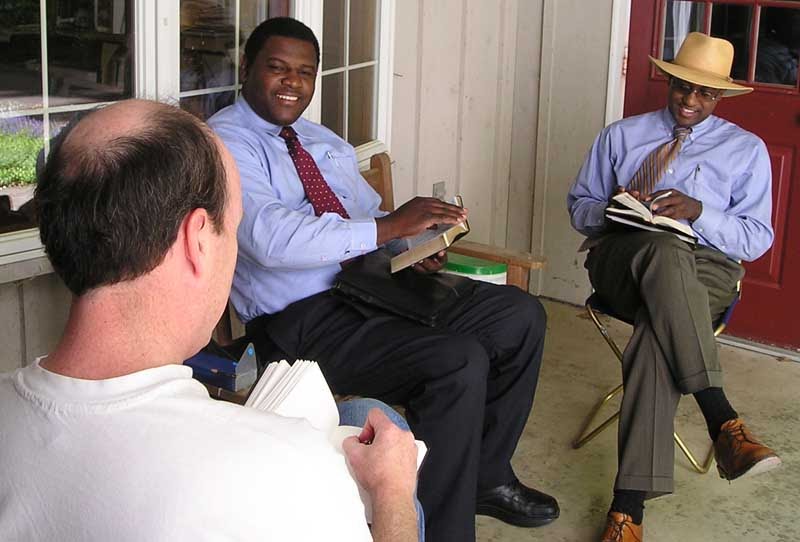 When the doorbell rang yesterday, Jeanette leaned into the studio and said, “Jim, would you get it?” A silver BMW with spoke wheels had park... 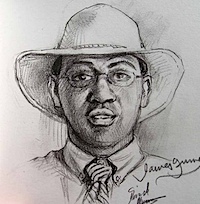 Simon says: “James Gurney, who’s famous for his Dinotopia books and his science fiction art, has begun letting in Jehovah’s Witnesses who come to his door as long as they pose for…

People I don’t want to talk to don’t knock on my door, but I would get a pentacle doormat.

“No Solicitors” actually attracts salespeople like flies to dung. It tells them the resident can’t say no personally.

Garlic blossoms, actually, not garlic. I am still waiting for a movie to address this. The original Dracula with Bela Lugosi had the blossoms. I want to see a vampire show up, sniff deeply and go, “MMMmmm… Are ve haffing Italian tonight? Yum yum!”

My dad lives on a corner and has been hit with all manner of sales people and those promoting their version of an invisible sky man.

Usually he’s just hidden or cranked up the tv, but for a while when I was a kid, he had a friend who was big into motorcycle culture. If said friend was over, my dad was more than happy to let the guy wearing a ton of leather with a Budweiser in each hand (it was the early 80s) answer the door. That usually worked.

Ironically, this is now the demographic that’s most likely answer.

I was home from work one day about a decade ago, flu and feeling miserable, all drugged up and sleeping in when there was a knock on the door. I open it, and there’s a guy with a roll of paper towels and a psychotic smile on his face. “Jesus,” he said, bradishing the roll, “Can wipe away sins!”
I was not in a good, forgiving mood, and grew up Christian, so I grabbed his roll of paper towels (they were in my face), quoted Matthew 6:29 “And when you pray, do not be like the hypocrites, for they love to pray standing in the synagogues and on the street corners to be seen by men,” and closed the door. I heard him yell “Hey, give me back my paper towels!”
My reply of “You just woke up a sick man, made him get up and go to the door, and tried to proselytize at him. You are not acting like a Christian, and I’m taking your towels to make sure you understand this. Go away.” had the desired effect.
I don’t think I was entirely rational or, indeed, in the right on this matter, but they were good paper towels, and introduced me to the concept that there were now paper towels that came in half sheets, so I guess some good came from it.

Well a few ideas occur, in response to that fascinating video.
One is that they didn’t want to be embarrassed by the famous Mormon Underwear…
The second was the recollection of [The Manacled Mormon]. Maybe that wasn’t so widely reported in the USA. (Manacled Mormon case - Wikipedia).
The third recollection was an exchange which I had with a Mormon Missionary. He was explaining his ideas to me, and became very emphatic about the idea “God walked on the earth.” This puzzled me a bit, because, as a well-tutored presbyterian boy, (at least in theory) I was aware that (a) God was Omnipotent, and (b) Omnipresent. In other words, God was everywhere, at once. Why was it important that “God walked on the earth”? So I asked him: “Why is that important?” He never said another word. Packed up his books and pamphlets, signing to his confederate to do the same, and walked out the door.
We are not only stranger than Mormons imagine, we are stranger than they can imagine!

If my neighborhood was starting to have that problem, I would have considered taping an anime girl boobie mousepad to my front door to scare them off

Used to live in an apartment where people would occasionally hang out on the landing right outside my door, talking/laughing/smoking.
I found that putting speakers by the door and playing “Ribbons” by Sisters of Mercy had the right amount of serial killer energy required to drive interlopers away. To religious knockers I would just say “I have no interest”, and close the door on them.

What an endorsement! ’Scuse me while I order said doormat…

I kept the god-botherers away for several years back in the 80s. Mom was so proud of her little Goth.

The doorbell rang at an ahem ungodly, early hour one Sunday morn. Yr humble narrator’s sleeping off the effects of Saturday night’s festivities was interrupted, which was very angry-making. The idiot rang the bell over and over, and I made my way downstairs. I opened the entry hall door and pushed aside the curtain on the front door. I gave my victim a Basilisk-like glare as I moved the curtain, and he jumped and took a step back.

The previous evening’s festivities’ intensity had been such that I’d fallen into bed without bothering with washing my face. Not only was my hair sticking out everywhere in best punkly fashion, the National Geographic-inspired black makeup was still mostly in place around my eyes. Faced with this furious vision, he stood there gobsmacked.

Before he could get his schtick together, I quietly, menacingly informed him that I am a black magician, and would cast a death spell on him if he didn’t immediately depart the premises.

He made a few noises that were not words, turned, and hurried back down the steps.

I went back upstairs, chuckling, and enjoyed The Sleep of The Just until that afternoon.

(Disclaimer: I was never one of the bad guys, just enjoyed wearing my subconscious on the outside for a while. That god-bothering jerk wasn’t to know that, tho, was he?)

When this action’s effects wore off, I put up a small sign near the doorbell:

“God is not so trivial s/he can be sold door-to-door. Do not ring our bell.”

The sign failed only once. Without opening the front door, I irritatedly asked the idiot who was stood there whether he could read. He briefly replied in the affirmative, and walked away.

I used to get the Mormon missionaries with some regularity. One day I invited them in for a chat. They asked me if I knew any Mormon people. I confirmed that I did, and that most of them were gay. They stood there, then said something about how that wasn’t possible, and left.
They probably told their elders, only to learn that an excommunicated, gay Mormon guy actually lived in the guest house. Because no Mormon missionaries ever darkened our door again.

mor(m)on missionaries lived in my neighborhood for some time. Their Powers What Am evidently rotated them every year, since we’d get used to seeing one couple walking or cycling in their black slacks, white shirties and little ties, then there’d be a new couple about.

I got rid of them by telling them that I loved In and Out Burger when I lived in Suthun Coliforniyah, but that I didn’t need any religion from them, and shut the door.

Haven’t seen any of their little couples around for some time. Doubtless when housing in our neighborhood skyrocketed it was decided to stick them elsewhere.

I met Gurney at a book signing back in the '90s. He was, without doubt, one of the most genuine, nicest public figures I’ve ever met. He even gave me his business card and wrote his phone number on it when I told him my wife was a children’s book illustrator (we never bothered him with a call). I can well imagine him inviting these strangers in and sketching them. What a great idea.