Why crows are awesome and have gotten a bad rap

Originally published at: Why crows are awesome and have gotten a bad rap | Boing Boing

should be given far more respect than they often get

Because if you do not give them respect, they will steal it from you anyway.

We have a family of crows. We saved a young one from some feral cats years ago and they come by every morning and whenever I’m outside. We leave bread crust and other food out for them in the morning and if I don’t put something out by 7:30 am, they’ll try to wake me up. They love eggs, anything from McDonalds, dry cat food, bread soaked in bacon fat, and mac and cheese.

Well, they are pretty awesome. Except… they’re goddam dinosaurs. They’ll kill us all one of these days.

Just crows, or can we include ravens and magpies? Around here they’re what defend us from seagulls (Yes, seagulls in Montana. They don’t mind fresh water.)

“…and have gotten a bad rap” yeah -sigh- not only that, but people who aid and abet crows (and other corvids (e.g. jays)) also get a “bad rap”. Never fond of a lot of speculation by the otherwise kindly grocery cashiers about what i’m buying but i really wince over:

maybe they need a crowbar…

The only objections to crows growing up was that the two old biddies across the street had a birdfeeder stocked with sunflower seeds, and the crows would start cawing at daybreak from spring to the start of winter for the seed to be replenished. Every. Damn. Day. Since the spinster sisters were retired, and didn’t get out to refill until about 9am or so, and apparently were stone deaf, this lasted until one of them passed on and the other moved away. I do remember the crows figuring out that this food source was gone within a few days, though, and actually being able to sleep in on a Saturday now and then.

Bluejays are corvids as well. They have absolutely not forgotten that they are dinosaurs. They will stare down our cats for their catfood. And are not terribly impressed by the apes who seem to think they own the place, either.

.
Fully agree with this woman. If you camp where crows or ravens live, make friends… They’ll warn you of bears, etc. Crows more likely to help than ravens in my experience, though

The only things we’ve discovered that they don’t like are black olives and mushrooms. My wife brings a lot of cheap pizza from her office that we dice up and give to the crows. They leave all the olives and mushrooms in the bird bath as some kind of protest.

should be given far more respect than they often get.

Edit: That 2008 post was vintage enough that the links in the post were broken. Here’s a link to the OG Ted Talk: 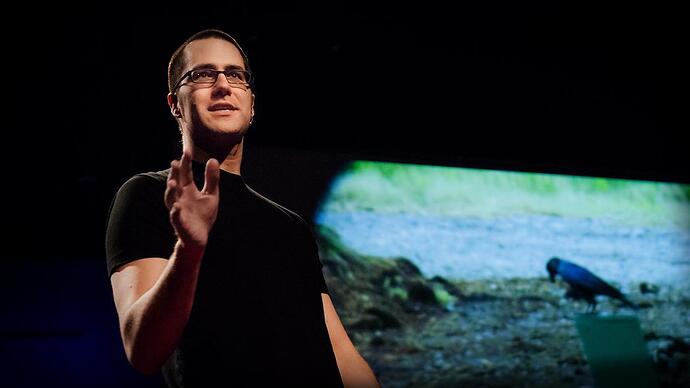 A thought experiment on the intelligence of crows

Hacker and writer Joshua Klein is fascinated by crows. (Notice the gleam of intelligence in their little black eyes?) After a long amateur study of corvid behavior, he's come up with an elegant thought experiment: a machine that could form a new bond... 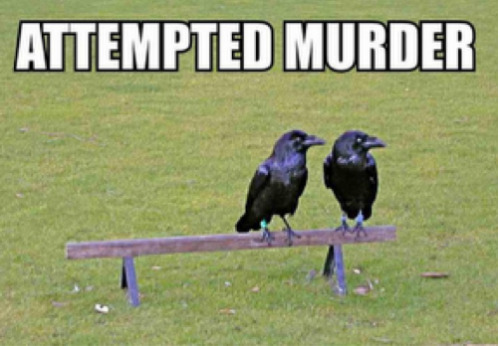 yup, 25 lbs at a time! and the jays and woodpeckers. the bluejays are my favorite. a regular flying circus, that lot! they do sit in the tree out front and squawk until i fill the peanut buckets on the porch. their angry squawks become happy songs and trills as they do their aerobatics and entertaining tricks. they will stare down the cat and loudly scold her if she is anywhere near, even when she is inside, behind the glass door.
corvids are cool (and damn smart!) 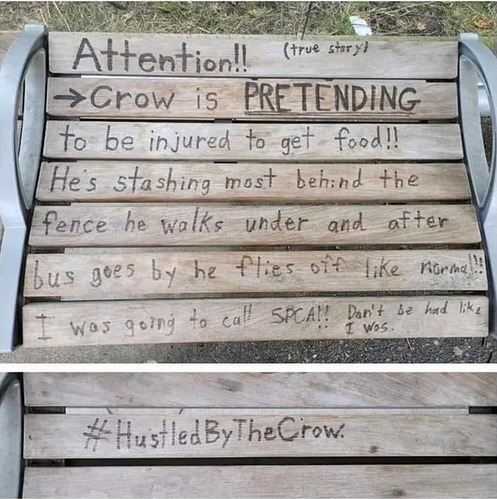 Don’t hate the player or the game here.

Corvids are amazing, there’s some magpies that figured out if they sneak up, then do their alert call, they scare the absolute shit out of our cat, no lips so you can’t tell if they’re smiling

About ten years ago, I was in an urban area, next to a greenspace with high gates around it. There had just been a big soaking thunderstorm, but the skies had cleared now. I saw a chipmunk wander into the path of some crows, and one of them decided to murder it, as one does.

But the chipmunk was too big to be crushed by the crow’s jaws, and too quick to be stabbed to death with its beak. (The bird tried both of these strategies first.) So it picked up the chipmunk up in its beak and straight up fucking drowned it in a puddle.

I don’t think that’s instinctual behavior. I think that psycho bird just FIGURED IT OUT.

I’d have intervened, but I was on the wrong side of the gate. The perfect crime.

We have a pair of backyard crows (plus their current fledglings) that beg and gripe about the lack of snacks. Corn chips and nuts are favorites, and we get crow stinkeye if we leave out fruit or veggies.

We also have chickens - I recently heard both the chickens and crows going off, so figured it was a yard intruder. Sure enough, a hawk had attacked one of our birds (only got a fistful of feathers). The chickens were in hiding and I chased off the hawk, who was immediately escorted out of the neighborhood by the local crow constabulary.

The chickens now know to beat feet if the crows are alarming. And we keep feeding our batch of crows.