Why everyone is talking about Childish Gambino's "This Is America"

It truly is a very powerful music video. I can’t stop watching and sharing the video with others. I believe the reason why is because it expresses truth, which is something the human brain craves.

Loved the video, but thought the song served more as a soundtrack for said video than a good stand alone song…

It’s a brilliant video and rewards on multiple levels: at first you’re captivated by how charismatic and fun Childish Gambino is to watch, and then you realize that you’re missing all of the out-of-focus stuff going on in the background, and when you start watching that, you realize he was distracting you on purpose, and galaxy brain kicks in oh! that’s the point! etc.

And when you listen more closely to the lyrics, you realize that he’s both celebrating and mocking hip-hop tropes, with trap beats and Quavo making Quavo sounds, and CG rapping “money – drugs – cops”.

I can’t wait to see what the right blogosphere has to say. Actually, yea, I can wait.

I can wait forever.

Well, its a video with a brown person using guns and drugs…so he’s a thug.

Actually a lot of them are calling this out for praise as a demonstrates black on black violence as the real problem in America.

No I’m not kidding.

Personally I found the video about as deep as a dorm room conversation. Not going to solve institutional and cultural racism with popular art, and frankly the video isn’t angry enough.

Ah yes, the bits where a man commits suicide after Death riding a pale horse rides by, Childish Gambino gunning down a gospel choir, kids filming violence on their cell phones, and Gambino being chased by a lynch mob were particularly jolly.

I watched the SNL episode thinking this guy isn’t all that funny and seemed stiff and 2 dimensional with no there-there. The 2 dimensional quality and stiffness I attributed to typical SNL writing. But, then I saw “This is America”, damn!, he can dance!.

An amazing piece. I look forward to more of his work.

I wish that I could dance.

I was thinking the same thing…and also, how angry should it be?

I don’t think Glover was trying to speak angrily to the racist and ignorant assholes who are directly responsible for much of the issues we still face. I think he was talking to the middle of the pack. The ones who aren’t “woke” as the kids say these days. I think this was about saying to them…hey, wake up and see what is really going on.

And it is incredibly powerful and effective in that task.

An amazing piece. I look forward to more of his work.

And if you’re wondering “ok, he can rap, and he can dance, but can he sing?”

Damn, he can sing.

I felt the same way, and I’ve heard from others who agree. I like Glover and think he’s really talented, and I like the visual imagery, but that style of hip-hop I find annoying.

There’s no accounting for taste. I don’t expect most people to enjoy Krzysztof Penderecki as much as I do, for example.

Lots of double meanings and double imagery indicating that any weapon used to hold down African-Americans can also be turned toward their oppressors. The chant about “contraband” struck me in particular, the word meaning both this: 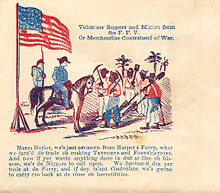 Contraband was a term commonly used in the United States military during the American Civil War to describe a new status for certain escaped slaves or those who affiliated with Union forces. The Army (and the United States Congress) determined that the US would not return escaped slaves who went to Union lines and classified them as contraband. They used many as laborers to support Union efforts and soon began to pay them wages. The former slaves set up camps near Union forces, and the Army help...

“Why?” Because it is fucking amazing.

Remember when music videos were a form of art and an opportunity to make something creative, insightful, entertaining, disturbing, etc and not just an excuse to show off wealth and women? Childish Gambino remembers.

i’ve seen countless writeups and twitter threads attempting to give “definitive” explanations of all the imagery and things in the video, from lyrics to music to dance styles to even clothing, but i’m taking it all as projection until i hear an official statement and explanation from Gambino himself. has he written up one?

I doubt he will. I mean he might, but the beauty of art is: it’s interpretation and experience varies with the audience. GOOD art, IMHO, won’t have a clear, single message. And even those that do, people still see things the artist didn’t intend.

And even those that do, people still see things the artist didn’t intend.

Perfect example: I saw lots of folks theorizing that the guy playing the guitar at the beginning was supposed to be Trayvon Martin’s father. Turns out it’s an LA musician named Calvin the Second. That said, there’s plenty of clear references to things like Jim Crow artwork, cakewalk dances, and current dance styles. I’d love it if Gambino eventually made an annotated video version.

They’re talking about it because it’s fantastic, although lots of people are already grossly misinterpreting it. From the RG link:

This is not a censor-friendly allusion to literal “gorilla shit” as a comparison of how bad the situation is. That seems to be the interpretation offered on (what is and forever will be for me rap) genius, but it’s pretty clearly a statement along the lines of,

“I hooked you with a sweet pop-sounding intro in order to trick you into listening to my serious social commentary that, statistically speaking, you aren’t going to want to hear”

It could also be seen as an observation of the fact that violence, racism, and inequality are right smack in plain view and people are still willing to ignore it. The fact that this song will likely get a huge amount of exposure this summer while a great deal of the people listening to it and claiming to like it are, mentally speaking, “eating around” the parts they don’t like serves as a sort of meta-commentary on the song itself. On some level the song is pointing out its own fate.