Why your local record store employee became an asshole

At the time (this was almost 25 years ago) I was just surprised that they turned so hostile when that wasn’t my intent. I was happy that I had an immediate answer for them and could relate.

And, for the record (although you’ll say “yeah, right”) I think this is the second time I’ve ever used the term in my life. I certainly didn’t at the time… like I said, it didn’t exist (at least not to me) back then.
After this unpleasant exchange, I won’t again. So, you’ve accomplished that.

And I feel I’ve hit a nerve with you too, so I apologize if you interpreted some ill will on my part. (no snark, seriously). Sorry.

WahWahWah! The language police is coming!
Somebody in some obscure part of the Net is oversensitive to a word that is not sterile enough so it should not be used.
Abort, Retry, Ignore?

…nor does your suggestion that people “stupidly” don’t know that Van isn’t part of his last name.

Isn’t it more that people are too stupid to not try other permutations when the first one did not yield a result? This one simple weird trick tends to have amazing results.

Everyone knows how it is interpreted and what it means.(Though I appreciate you calling it out and even linking to someone who explains it.)

It is typically used by single, white males who obviously don’t work anywhere where what is said might matter… and usually is noted by people as “okay a wannabe rapist sort” but not commented on because that sort isn’t the kind that reasons well.

Somebody in some obscure part of the Net is oversensitive to a word that is not sterile enough so it should not be used.

BB is one of those obscure parts of the net where people are sensitive to words. Just look at some of the coverage of Chelsea Manning, bullying, rape culture, and race.

We actually had all numerics at the start of each genre section, sorted least to greatest (so “10,000 Maniacs” came after “311” which came after “4 Non Blondes”). Unless the numbers were spelled out, like “Seven Mary Three”, then they went in the appropriate letter section (of said genre). Made perfect sense to some, totally confusing to others. We’re all different, so there’s no single answer to suit everyone.

But someone else’s suggestion on here to put redirectors in places of known confusion is a great one. I think the managers may have done that, actually… Hard to remember for sure; like I said, this was literally half of my middle-aged lifetime ago.

Heheh. We only went by the last name when it truly was a person’s name, not a 2-part band name or nom de guerre. Again, made sense to some, confusing to others. No single solution is sensible to all, but you gotta choose a system and stick to it.

My friend Joseph Zitt wrote a book in a similar but less snarky vein about his term as a Borders music clerk. It’s very good. 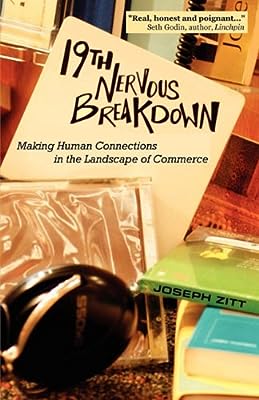 "Sales is service. If you don’t believe that, this book will change your mind.” Doc Searls, co-author of The Cluetrain Manifesto After two decades in the computer industry, Joseph Zitt found himself o ...

In my youth, I went into a classical record store and asked “Do you have The Goldberg Variations?” “By who?” the guy behind the counter replied. “Bach” I said, proud that I knew the answer. “Well, of course it’s Bach” he said haughtily, “Which pianist?” “Glenn Gould?” I said meekly. “Which Glenn Gould, the 1950s original or the 1980 re recording?”

A few minutes later, I slouched out with a CD of Glenn Gould’s re recording.

BB is one of those obscure parts of the net where people are sensitive to words. Just look at some of the coverage of Chelsea Manning, bullying, rape culture, and race.

If by “obscure” you mean it is not youtube comments, then yes.

Though, BB is obscure enough, in the tech areas, it is widely quoted and relied on. It does appeal to more alternative crowds, but typically the sort with minds and who are sexually satisfied.

Yeah, that never happened in our store… but it was a moderately-sized chain rather than a mom n’ pop, so maybe the culture was different.

For you I could easily see our resident classical expert, Gary H (fantastic guy, miss him!) leading you along, saying “Yeah! We’ve got a bunch of variants over here in the classical section, are you looking for a particular performer or performance?” and then getting all excited, convincing you to check out his favorite one (in addition to the one you were originally after).

I’ve spent my whole life in record shops. Never worked in one because the rent must be paid.

Years ago, I noticed that if you went to see “Sir Snooty and the Vintage Consignment” in concert, the club would be filled with the most insufferable snobs imaginable. But if you were to meet with Sir Snooty and clan in the recording studio, they all turn out to be plain folks.

Record stores are like that. The more hep ones have sweet staff and noxious patrons. Because who is going to exaggerate the cultural significance of purchasing rotating petroleum products? The underpaid staff or the crate-digger?

I liked Bahadu before he became white.

Small world! (I guess?) He and I were both on the Miles Davis listserv (and a couple of others, I think), and I met him in Austin once.

I just saw him 3 months ago. We used to work together and have stayed in touch.

Must have been an old, crappy CD player they were using, then. Once mixed-mode CDs started becoming more common in the mid-90’s (thanks to their use as a popular media for video games), most audio component companies started building their CD players to respect the “data” flag, which would prevent them from actually trying to “play” data tracks.

I must say, when I first heard In the Flat Field, I did think to myself “my, this is a mellow and funky album.”

Nice save, housebreaker. I think you got away with it.

I’ve read tons if my friends writing and Joe’s stuff deserves a much broader audience. He has everything a great writer needs, most importantly a voice and heart.

If by “obscure” you mean it is not youtube comments, then yes.

I was using his language, sarcastically, so I’m not sure you’re quoting me: he’s the one who said:

WahWahWah! The language police is coming!Somebody in some obscure part of the Net is oversensitive to a word that is not sterile enough so it should not be used.Abort, Retry, Ignore?

Which makes it kind of ironic that @shaddack has liked your comment which essentially criticizes what he said.

I was using his language, sarcastically, so I’m not sure you’re quoting me: he’s the one who said:

You may like to check the stats. According to alexa.com rating, boingboing.net is #2673 in the world while persephonemagazine.com is #122258. Almost two orders of magnitude (1.660 order of magnitude, counted by subtracting the decadic logarithms) of difference. The latter certainly counts as way more obscure by numbers way more objective than rhetorical handwaving, and explains why I never heard about that site before and likely won’t again unless somebody will need to get an “argument”.

Another edit: 1.66 orders of magnitude difference is about 40 times of the difference. Not a small difference in relative obscurity.

Which makes it kind of ironic that @shaddack has liked your comment which essentially criticizes what he said.