And yet this bunch of rabble-rousing morons have managed to achieve all of their party’s goals and now Theresa May is happily running with their policies.

They might be a fucking joke, but they won.

(“punched by a colleague”)

Is not captalizing all the letters in an acronym a typical British thing? I feel like I’ve seen it before but not consistently.

UKIP are the guys a majority of the UK public trusted to have expert opinion on the future of the country, right? Heh…

It’s just a Ukip thing. Apparently they hate it.

Guardian and Observer style guide: A

From A* to José María Aznar

Use all capitals if an abbreviation is pronounced as the individual letters (an initialism): BBC, CEO, US, VAT, etc; if it is an acronym (pronounced as a word) spell out with initial capital, eg Nasa, Nato, Unicef, unless it can be considered to have entered the language as an everyday word, such as awol, laser and, more recently, asbo, pin number and sim card. Note that pdf and plc are lowercase.

(also, it really pisses the kippers off)

The biggest clue that thuggery was involved was the fact that he belongs to a right-wing populist party.

I understand where they’re coming from, but their organisational-acronym-pronounced-as-word-because-there’s-a-vowel-in-it print convention still seems odd and jarring to me. Although if it takes the piss out of these proto-fascists I can live with it.

Are we sure Farage disappeared and “left”?

I’ve the feeling that any moment now May will claw her face off and we will see she was Farage all the time.

Maybe Farage was May all the time! Dun-dun-duhhhh!

Think I’ve seen acronyms used that way in the Guardian.

Oh. @daneel 's got you covered. Should have read all the thread before posting.

Do you still think you can control them…

All other issues aside, those are some weird quotes around “feeling,” huh?

Perhaps a better-educated gentleman would not use a verb as a noun, and would have said he had lost sensation. Also, this sounds more like a stroke than a punch.

How are these UKIP jokers ever going to appeal to potential supporters in the BNP if they can’t hold their own in a friendly punch-up between inebriated friends; much less some proper jackbooted street violence?

People will start mistaking them for Tories if they don’t harden up.

When you have a party that are basically the BNP but in better suits, a party that resolved political conflicts with their fists, combined with a former leader who had a penchant for singing hitler-youth songs and the realisation that their raison d’etre is now pointless because the fuckheads took us out of a good thing this is inevitably the result.

You miss the farce where they’ve already had one leadership election - where this guy was 17min too late to get his nomination papers in- and the newly elected leader gave up 18 days in, before officially accepting the leadership, meaning Farage is back temporarily. They make the Labour party look sane.

I keep thinking politics cannot surprise me any more this year, and then… It feels like we’re in one really long episode of “The Thick Of It”

the newly elected leader gave up 18 days in

Did you see that she wrote “under duress” on the forms registering her as leader?

I really hope Neil Hamilton stands for the job. I find it tremendously funny that it seems that most of the kippers can’t stand Carswell, who’s pretty much their only competent politician.

So this puts Farage back in charge? Didn’t he pull a Nixonesque “You won’t have me to kick around any more” when he resigned? 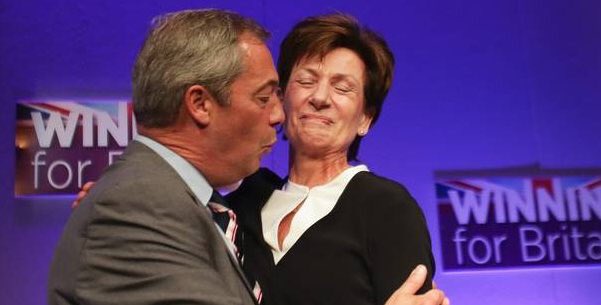 “Any suggestions for what UKIP's new leader @DianeJamesMEP is thinking as @Nigel_Farage puckers up?”

Good thing they don’t carry weapons over there.
Liable laws stifling freedom of expression -
having to talk in generalities and code to discern what happened.
If Trump has his way he’ll bring this type of insanity to the USA.
Opps gotta watch what I say