I had a carnival for my bday this year, games and prizes and all. And because I’m nice, I invited the local passel of young girls over before the “grown-up” party to play the games and win some prizes. They had a blast, and all my neighbours took advantage of the 2 hours they were at my house to do parent alone time things (read: mop the floor, seriously, that is what they all did) and I became the coolest lady on the street. Flash forward: this same passel of little girls now think we are all besties, and just COME OVER any time. I think the parents encourage them too! Jerks! I see them all across the street drinking wine together waving at me!

I asked a Ouija Board “entity” what it liked to do, and the answer was “eat babies.” Freaked my buddy out, I thought it was hilarious. Kind of applies to this story I guess.

I’m drinking right now, and it freaked me out too.

Dear Weird Neighbor,
Your first response was hilariously inappropriate. Seriously, I love it. But now you’re escalating and that never ends well for anyone. Declare victory and move on.

P.S. I have a couple of growlers of Bearwalker Brown and a new DVD of Corman films. Would you mind picking up a pizza?

The parents’ overreaction would be hilarious if it wasn’t a perfect example of hysterical parents everywhere. Jumping to the conclusion “pedophile” instead of “prankster” has us all shitting our pants with fear.

On the other hand, I don’t want to be the defender of “get off my lawn!”

I’m firmly in the camp of: This person is not a threat and is a fan of hyperbole. I don’t have kids, but I suspect that even if I did, my first thoughts would neither be, “pedophile,” or “homicidal maniac.” I would probably laugh, then cringe, then go talk to my neighbor.

Nowadays, I have an almost infinite amount of patience for children. So even if I was “mad” at them about something, I am sure that I could communicate this to them in a way that was darkly humorous for all of us as well as educational.

BUT - in my earlier years, like teens and early 20s, I had little patience for children. My worst outburst was easily at a cinema which was packed and I had the misfortune of a family sitting in front of me. Two parents sitting on either side of their three kids. They were as bad as kids at a movie could be! Yelling, throwing candy at each other, teasing each other while climbing up on the seats. I put up with this for about fifteen minutes, hoping that they would eventually be absorbed into the story and quiet down. That never happened! So then I tried to politely get the attention of a parent or two to quietly ask them to help. After about five minutes of furtive attempts at communication, one of the parents noticed and glared at at me, basically telling ME to “shush”. Without having thought about it, I instantly belted out “HOLEE FUCK! These kids better chill out or they are going to get strangled with their own intestines!”. And they did! The parents were (figuratively) mortified, the kids realized that they had pissed people off. The theater cheered for a few seconds, because they were all apparently suffering in (not-so) silence. I don’t even remember what the movie was!

I was kind of embarrassed that I had such a nasty outburst, but it seemed to work. If they thought I would have really hurt them, I would have felt badly, but they understood. Otherwise they would not have still been sitting near me. Now that I am a parent, I try to teach mine to be outspoken, but also respectful of people.

I wonder what were the items that the children left on the neighbor’s porch. Did the children think of the items as gifts for the neighbor? Perhaps as tokens of appeasement? Have the children cast the neighbor in a role in some make-believe game? When I was little, a sibling made up a game where we left special gifts for an (imaginary) entity that would (supposedly) bestow good fortune upon us if we left it special things in a certain place.

The children look delicious. May I have a taste?

OK, I am definitely going to have to teach that over here in China as an American idiom.

Right after, “Jam out with your clam out.”

Wait - where does the Ban Dragon live? 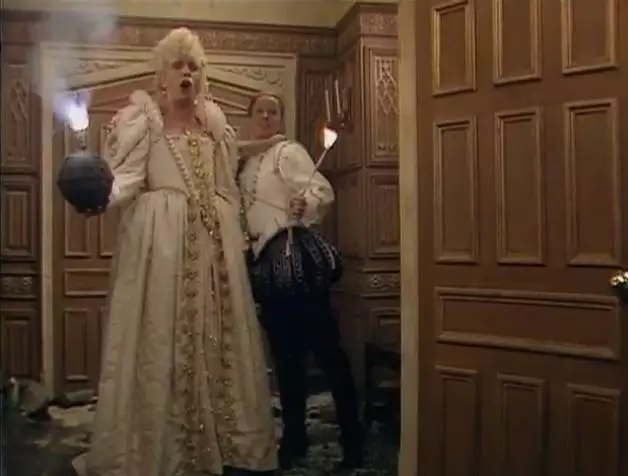 It’s got a tongue like an electric eel! And it likes the taste of a human’s tonsils!

Strongly agree. Blame enough to go around, but I feel it’s riskier to live next to the person who is into publicly shaming their neighbor.

Maybe consider paying enough attention to your precious little morsels so that you know if they’re potentially annoying your weird neighbors?

Maybe these kids are brats.

And most of us can appreciate how tasty brats are – especially when they’re barbecued, on a toasted bun, served with ketchup, mustard, relish and onions. Mmmm, brats.

brats are the wurst!

Interesting, I’m a member of that FB group, and am amazed daily how people in that neighborhood will freak out if a car drives through too slowly (or if there’s a black person walking down the street). Too bad it isn’t a real serial killer cannibal.

Whatever happened to sitting on your porch in a stained white tank top holding a shot gun and smoking a rollup? It may not have been witty, but at least it got the point across.