We offered to cover them up or change,

How about go to fucking jail, “coach”

That’s a special kind of stupid.

We offered to cover them up or change,

Aww, how nice of them.

Translation: We totally thought we would get away with it, but apparently actions have consequences.


Also, that’s a half-assed apology if I’ve ever seen one.

We sincerely apologize to anyone that was offended by the jerseys. We offered to cover them up or change, however the league saw fit to remove us and we have accepted that decision

Nope not an apology. You willingly and knowingly did shit that you knew was at best offensive. Being removed from the league should be just a start.

I know it’s very shaky legal ground, but in an ideal world I think the adults involved should be charged with one count of something akin to contributing to the delinquency of a minor for each kid who was exposed to this garbage. We need to stop making new racists. Call it a national security isssue if that’s what it takes.

It’s amazing that team officials, coaches, parents, even players allowed this to continue until the league coordinator finally took action. Why did they think this would be a good thing to do? I hope the teams with black players (if there were any) kicked their god damned fucking asses to hell and back.

we have accepted that decision.

Who cares. I mean, what was the alternative, stand on the court until removed by police?

What the clowns in charge of that team don’t seem to have accepted was that it was wrong to start with.

Isn’t it great that the children of KKK members get out and play team sports and exercise their right to freedom of expression? /s

It wasnt a statue or a plaque honoring Robert E. Lee that created a firestorm here 25 years ago but a KKKcross that led to the same divisiveness and condemnation other American cities have been dealing with in the past few weeks.

Packages containing KKK flyers were dropped on dozens of Green Township doorsteps on Cincinnati’s West Side. 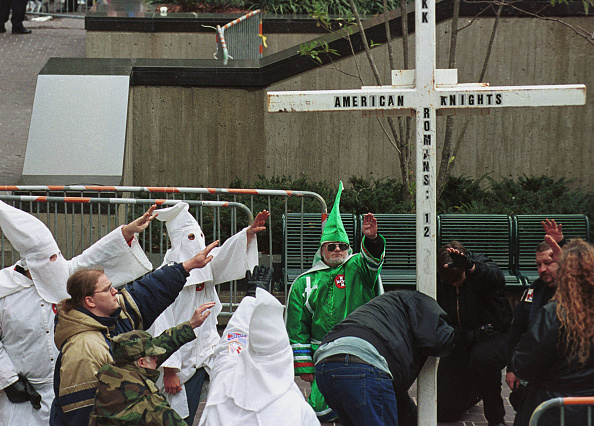 Members of the Ku Klux Klan salute a steel cross December 2, 2000 as other members finish erecting it on Fountain Square in downtown Cincinnati, Ohio. Ten KKK members put the cross up under police...

The adults involved should be banned for life from youth sports.

Unbelievable.
Almost as unbelievable as this story about a H&M hoodie for kids:
http://www.cbc.ca/news/entertainment/monkey-hm-hoodie-weeknd-1.4478011

I’m from the area and I got the hell out asap. Racist shit is everywhere but pretty awful in SW OH.

Back in the 80s we used to call the Cinci police “the Gestapo”. m I’ve been hassled by them for no damn reason.
Officers had a penchant for shooting fleeing suspects in the back since the cops were all severely overweight.

My own parents were pretty damn racist “why won’t those black folks just ‘rise’?” uh, maybe because of systemic racism and structural economic disparities exacerbated by Reagan race baiting and the ‘war’ on ‘drugs’? #1 reason Jeff Secessions wants to roll back cannabis legalization? re-enfranchises a bunch of BS arrests for stupid ‘felonies’.

I am also of the same mind on this, more than one school official, coach, parent, etc saw these jerseys and thought it was fine. The fact that the league had to step in and do something about it speaks volumes about not just the team in question but everyone else involved.

Great tragedy on the River Ohio

Ah Ohio. The south of the north.

Is the coach ALSO a seventh grader?
How did the league even accept them with a name like “Wet Dream Team?”
blech

Racist shit is everywhere but pretty awful in SW OH.

Being an Ohio native, I can concur; growing up, Cinci was especially known for being bigoted as fuck.

I also left the state as soon as I was able.