Originally published at: YouTuber who modified the brakes on his Tesla Plaid is lucky to be alive | Boing Boing

Hahaha! I spit out my coffee.

He was running DOT3??!? I run DOT4 on the street FFS. On the track we run DOT5. This chucklefuck is lucky he’s not dead and needs to understand that the only performance upgrade anyone needs is the thing between the seat and the wheel. Brake fade is bad, but shouldn’t cause this huge an accident if you know the least bit about what you are doing. I’ve lost my brakes due to mechanical failure at 120 on the back straight, but you can learn to handle it. Me and the car walked away and we both did more laps the same day.

Go to any beginner’s track day and watch the instructor hand you your ass in his rented Kia, then decide if you need ceramic fucking brakes on your Tesla fucking Plaid.

Ugh. As a long time racer, this kind of stuff makes me angry.

the YouTuber is probably SOL with his insurance company.

Wouldn’t track racing do that already, or was he paying a premium?

Lots of insurance for events and race day. Pretty restrictive tho about doing known-bad upgrades.

Wouldn’t track racing do that already, or was he paying a premium?

You can get track day insurance, but it’s very expensive. Most people who do track days in their street car do it on a “don’t ask don’t tell” basis. Big accidents are actually really rare. I did track days for 10 years before I started racing and never knew anyone who had to involve their insurance company. If something minor happens, you fix it yourself. People joked about “if something big happens, have the car towed out to the street before calling the insurance company” but again it never came up.

It’s a situation where the insurance companies think the activity is a lot more dangerous than it is. They think a track day is “racing”, but it’s a very controlled environment filled with people who know what they are doing and take safety very very seriously. You and your car are probably safer at a track day than on the freeway you used to get there.

But to your original question, yah this guy is fucked. His policy was void the moment he drove on to the race track property. I doubt someone who puts ceramic brakes on a Tesla has the wherewithal to research track day insurance.

Edit: I should add that whatever this guy was doing, it was not a proper track day. No track day club would ever let him in the car without all proper safety gear. A helmet and neck protection (a roll or HANS device) are mandatory at every track day anywhere. The track won’t insure the event otherwise. Many track days require full gear (fire suits, harnesses, etc). So this was some sort of private track access situation with this idiot.

Wowsa. Looks like he got lucky that he wasn’t hurt worse. You would think someone doing expensive upgrades would know about different types of brake fluid. I remember going to the Rockies and being warned not to ride my brakes for this very reason.

At least he was on a close track and didn’t hurt anyone else.

They think a track day is “racing”, but it’s a very controlled environment filled with people who know what they are doing and take safety very very seriously. You and your car are probably safer at a track day than on the freeway you used to get there.

Mostly filled with ppl who know what they are doing? This guy certainly didn’t.
I wonder if he’ll be banned from the track. Seems sensible to ban stupidity like that when dealing with hunks of heavy machinery going very fast.

Mostly filled with ppl who know what they are doing? This guy certainly didn’t.

See above- I made an edit to my post that this wasn’t a track day. I think your reply crossed electrons with my edit.

Why yes it did! I didn’t really clock how the lack of safety gear means he was fucking around and finding out without anyone sensible around to stop him

No, this is clearly caused by a glitch between the seat and steering wheel.

Go to any beginner’s track day and watch the instructor hand you your ass in his rented Kia, then decide if you need ceramic fucking brakes on your Tesla fucking Plaid.

I bet the driver was this guy: 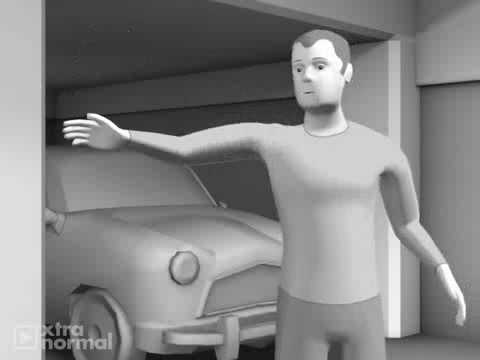 A lot of folks assume you can just drive to a racetrack and they’ll let you race. That’s not the case. It actually is true with drag racing. Most drag strips have “run what you brung” nights where any member of the public can drive up and take passes. It’s actually a lot of fun and very inexpensive (usually just a $20 gate fee or something). Even that requires at least a helmet even though drag racing in a street car is super safe (you really can’t get much speed in a 1/4 mile in a street car).

Road courses are different though. They don’t have open public days because the tracks don’t want the liability. However, counterintuitively, anybody can actually rent the entire track for a day. It’s very very expensive (usually on the order of $20k for the day for nicer tracks) which is why generally only clubs, racing orgs, and track day companies can do it. That fee includes Fire/Rescue and EMS services however, which the track’s insurance requires. The renter of the track is then responsible for insuring the event. Racing is all about the layers of insurance and who has to cover what.

If a single individual rented the track (as this guy may have done), I suppose he could drive without a helmet. I don’t know any other way you’d get away with that, though it’s shocking that anyone would consider driving at speed without at least a helmet and neck roll. People have no appreciation for the forces involved in car crashes.

I bet the driver was this guy:

Ahahahahaha that is perfect. There is one of those guys at every event. The more money they spent on their car, the worse their line is. It’s a rule of the universe. I spent a lot of time out-braking and then sitting behind GT2s and Gallardos in twisty sections in my 120hp street car.

Note to self: insane amounts of regen might mean the actual brakes are failing.

I think I originally saw that video posted some 10 years ago in the comments section on Jalopnik back when it was still a good site. It became one of those videos I have to come back to every once in a while to rewatch because it’s just so good. (And the whole AI video generation and monotone synthesized voices from the long dead Xtranormal make it even better IMO.)

Between your comments here and the content of the OP, that video immediately came to mind.

Plaid isn’t a reference to Disney park guides, but rather to SpaceBalls. “They’ve gone to plaid!”