A round up of breitbart - abandon hope all ye who enter

I know, but @ChickieD made a pretty good argument for reading it over here, so I went and took a look and the first headline was

and I don’t know if I can do this by myself. Maybe we could have a thread for all the latest alt-facts from alt-reality? Maybe it could attract trolls, or maybe it could help contain them. Maybe it should just die? Thoughts?

Anyway I’ll go first. Fuck Ann Coulter, what else is there

Oddly, this is more reassuring to me than anything else I’ve seen that the health bill as written is DOA. I wonder what they’ll replace it with.

I see they’re bitter about Geert Wilders losing the Dutch election. Trying to put a “positive” spin on things:

The win may be a pyrrhic victory for Rutte whose party is projected to lose ten seats in parliament and whose former coalition partner, the Labour party has totally collapsed.

Donald Trump: ‘Failing’ Snoop Dogg Would be in Jail if he Shot Obama in Rap Video

Evans — who supported Democrat Hillary Clinton during the 2016 presidential campaign — has been an outspoken critic of Trump on social media.

In my own city there’s a well known middle aged retarded fellow who walks the streets dressed as superman while picking imaginary fights with the lamp posts, trees, and such… Shockingly, I know of no one who has ever solicited his views on politics or world affairs…

Yup. 2833 comments and counting. The article is only about six hours old. How does anyone take in all that noise? I guess you don’t, you just howl into the void.

Texas School Bans Sunscreen Because a Child Might Drink It

One of those headlines is from boing boing, did you notice? I’m not having a go at bb, honestly if you look at the list of bb articles about schools the difference in headlines is pretty instructive. I just thought it would be a fun game because I don’t know what else to say about this junk.

Any brave souls want to try to unpack it all?

You can also add Drudge Report into this mix, I suggest.

Here’s what I am looking for as I read:

Chicago homicide rate, for example, is a big one that people talk about.

I think it’s a convenient funnel for doing racism. While claiming not to be a racist (even to themselves).

There’s a lot of that. They also usually have a feel good story about the groups they are targeting (women, blacks) so they know that they are really good guys who love everyone, at least the good people that fit in the approved mold.

It’s almost like you can feel a hot blast of infernal air hit your face when you open up the website. How much hysterical vitriol can you fit into a single headline? Ask breitbart, they know.

The judge then prevented every other judge and every other state from following the President’s order, the judge making himself a one-man Supreme Court and substitute President.

says Robert Barnes. Who the fuck is Robert Barnes? “Robert Barnes is a trial lawyer with high profile wins in constitutional, criminal, and civil law.” So when your weird cousin tells you that the Hawaiian Obama Judge blocked the ban by making himself Substitute President, you should know that’s expert legal commentary.

Just next to that, another article

Some Libyan refugees come to Washington D.C. “to share how [they] are suffering under a reign of terror by radical Islamists in her home country.” No real commentary about the ban in the article, lots of numbers about different countries and a brief explanation of how refugees are vetted. Then the article trails off with some legalese excerpted from the latest EO revision regarding waivers. As you say:

What’s going on with the logic in these articles?

They do have an odd shape to them. I feel like the essential story of the muslim travel ban is that Trump said “we need to get tough on terror” and someone tried to explain “we’re already tough on terror” and Trump was like “no but tougher”. So there’s a lot of grandstanding going on but I think Trump would be happy enough if he can just somehow take credit for the strict vetting already in place.

I get it, this is the Liberal Hollywood Elite narrative! I feel like I’m getting the hang of this. Like, criticism of Trump is out there and breitbart readers are going to hear it, so you frame it by choosing whose mouth you put it into. “Liberals are a bunch of unrealistic idiots who get all their politics from rich celebrities who think you can change the world by just snapping your fingers.”

The comments are really fucked up. I try to at least read a little.

I’m not up for that. At the end of every page is a bottomless rage-hole. I’m all for getting the opinion of the alternative man in the alternative street but I would maybe think about going somewhere like stormfront for that. I don’t think even breitbart commenters read breitbart comments, they just write them. Say what you like about nazis but I bet their forums are well-policed.

Oh yeah, the Hollyweird libural angle. That’s another big one.

They are super misogynistic, too. I read an article on some kind of abortion law. The comments on that one were…awful.

I have limited capacity for entertaining fools and will not visit these websites.

Thank you for your service.

I can’t bring myself to visit that site for a range of reasons, but one of them is that reading Breitbart takes me back to my college days of reading the local Young Republicans “newsletter”: It was terribly written, showed less than zero understanding of critical thinking, and wasn’t even creatively interesting: 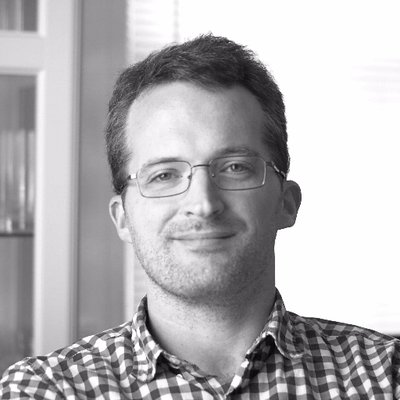 reading the top story at Breitbart and drinking in the quality writing and analysis https://t.co/b1XeAwRVB3 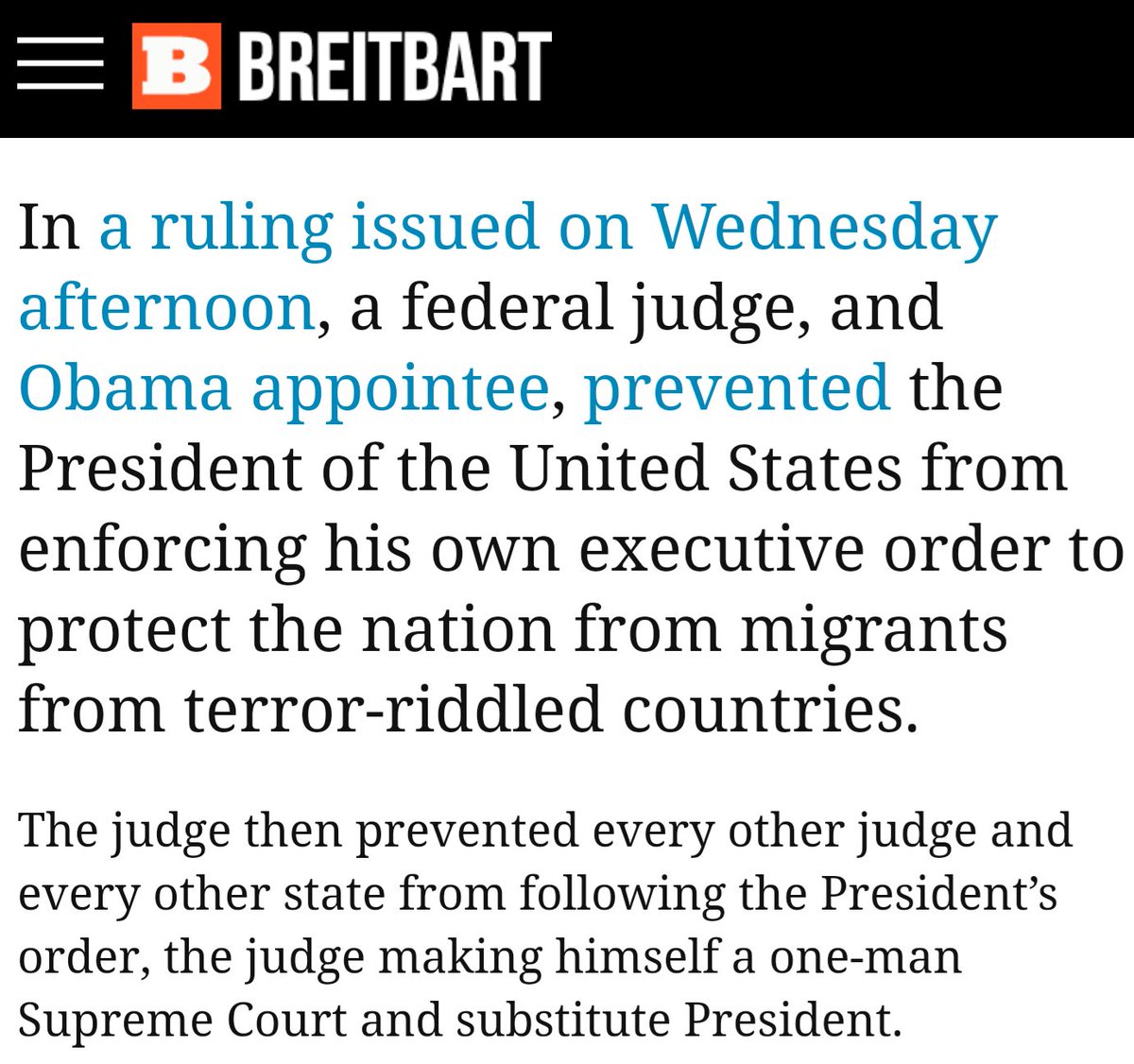 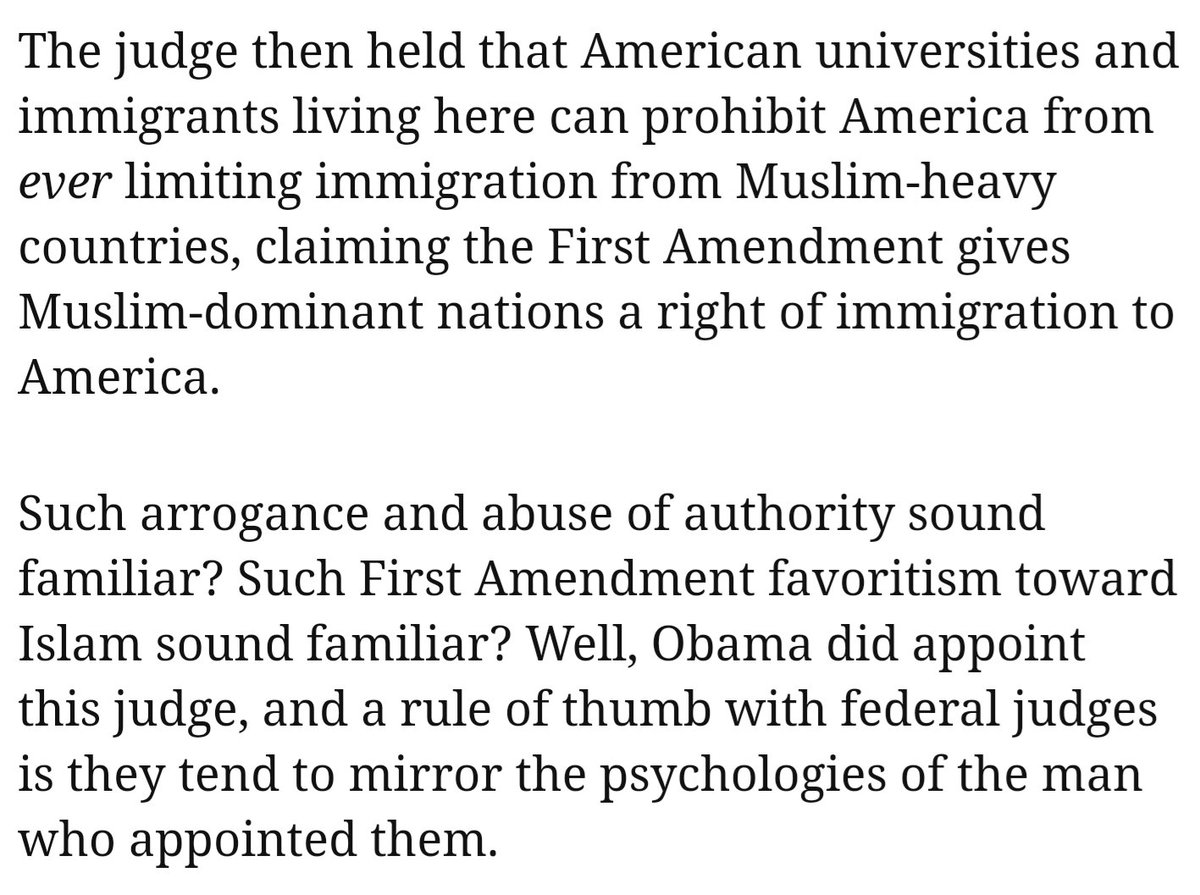 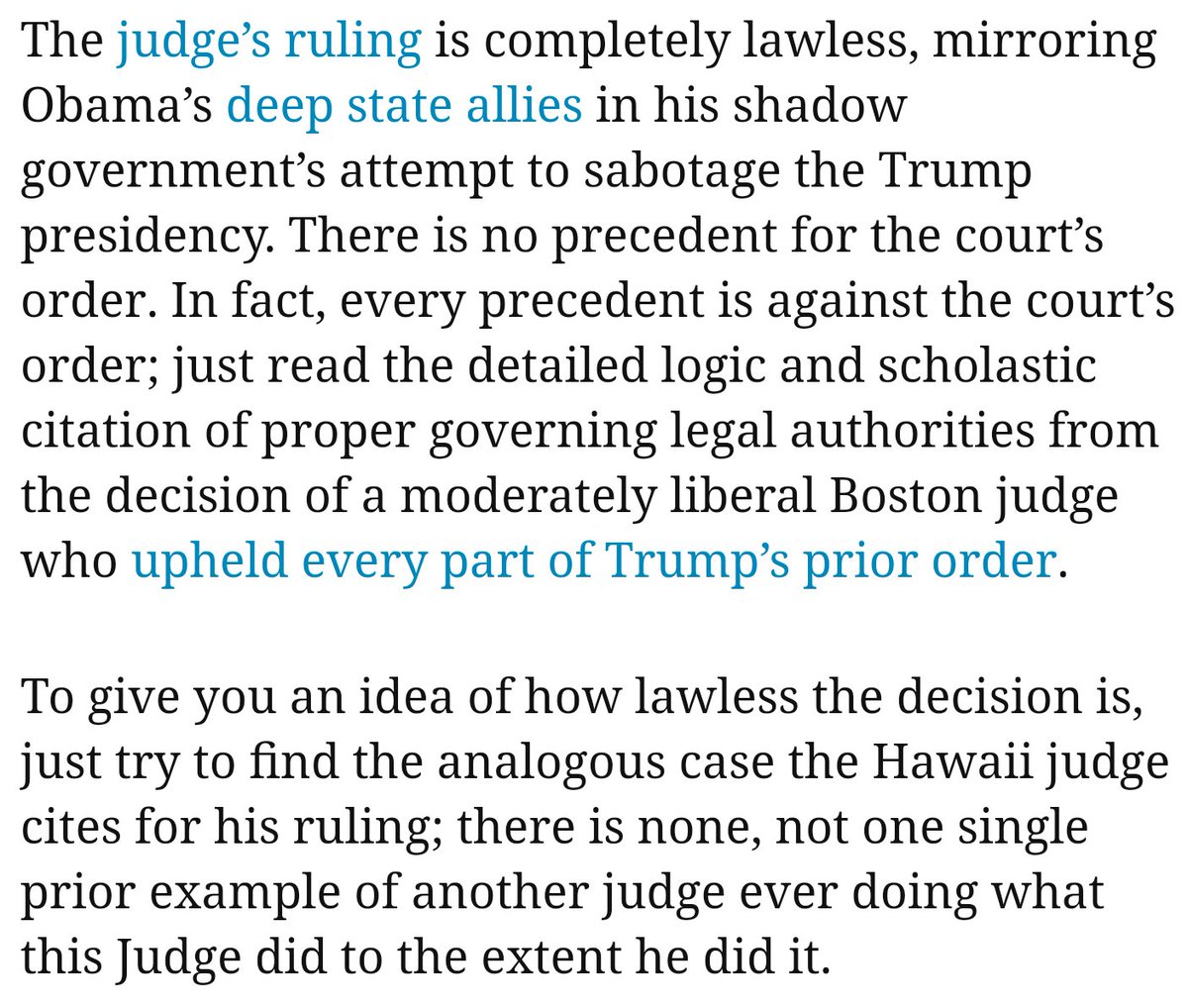 Yes, it’s terrible. Terrible writing and terrible ideas. But they are very influential ideas. Dangerous ideas. And our president believes them, as do many in his inner circle, and he has a lot of followers who are influenced by the shitty writing. So, we need to confront it, because it’s dangerous.

or as my people say
Never Again

Following your article, I went to breitbart news for the first time in my life. I feel a bit puzzled: it looks like click-bait everywhere, except that it is only titles I cannot possibly feel bothered to click.

(Probably it’s my fault. Maybe I should also say that some of the extreme left-wing sites have the same effect on me.)

What’s going on with the logic in these articles? I am trying to understand the trick of them. They are weirdly circular but I can’t put my finger on it.

Now, that is interesting. There is indeed some distortion of logic with strongly partisan articles (far right and I think also far left). Probably it is linked to the strong “them versus us” mentality. At first view, I think the logic is always based on the unsaid assumption that there is a conspiracy (from the “them”) against the “us”. I would need to read more of their articles to be sure, however.

There is no sense in complaining that this or that Trump administration story isn't bigger news. There is simply so much garbage pouring out of 1600 Pe ...

Now, now… we can’t call them racist until we have hard data! /s

Since Brietbart IS Bannon the following video on Quartz Media is worth watching to get an inside view into Bannon’s head via three of his ‘movies’.

To understand Steve Bannon, you need to watch three of his movies

His movies say a lot about what's on his mind, and how he plans to use the power of the US presidency. 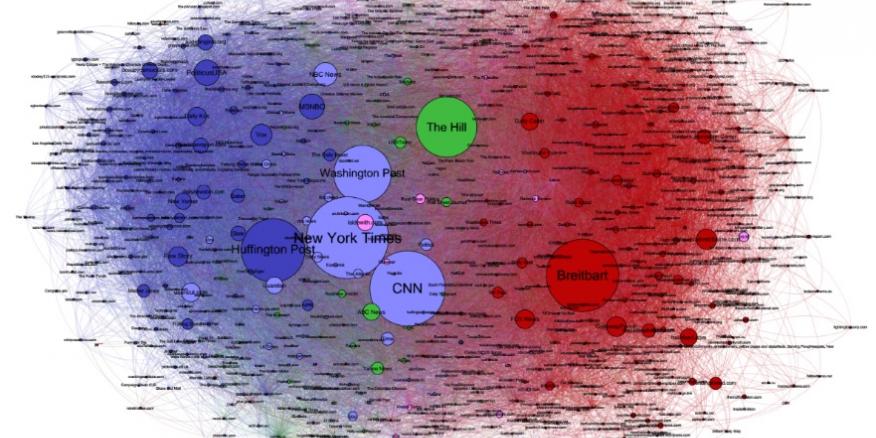 A Major New Study Shows That Political Polarization Is Mainly A Right-Wing...

What's at issue here is not just asymmetric polarization but asymmetric news consumption. The left and the center avail themselves of real journalism, however flawed it may be, while the right gorges on what is essentially political propaganda.

Good to see data backing up my observations

By contrast, Donald Trump supporters clustered around Breitbart — headed until recently by Stephen Bannon, the hard-right nationalist now ensconced in the White House — and a few like-minded websites such as The Daily Caller, Alex Jones’ Infowars, and The Gateway Pundit. Even Fox News was dropped from the favored circle back when it was attacking Trump during the primaries, and only re-entered the fold once it had made its peace with the future president.

There is indeed some distortion of logic with strongly partisan articles (far right and I think also far left).

In this, as in all matters, we turn to the wisdom of breitbart.

A Politico/Morning Consult poll released on Wednesday shows 52 percent of voters approve of President Donald Trump’s job performance, but that statistic is in the second-to-last paragraph of the Politico article about the poll.

Public opinion of the new health care proposal is limited thus far, though the POLITICO/Morning Consult poll does show less fervent opposition to the bill than a SurveyMonkey poll of adult Americans released on Tuesday.

Politico chose instead for its article, entitled “Poll: Voters Wary of GOP Health Care Bill,” to lead with the divide among voters on approval of the GOP’s American Health Care Act…

Politico have their own slant on things, it’s one of the reasons I read it from time to time, but they’re being charitable in mentioning an outlier survey at all. They have no trouble admitting to Trump’s populism. And of course breitbart are as bad as anyone for the exact sort of manipulation they’re blaming Politico for; their article on Trump’s budget has the expenditures in dollars and the cuts as percentages to prevent anyone from doing maths.

I feel like republicans and right wing commentators have this thing where they keep a mirror on their desk like one of those Time Magazine Man of the Year ones, except instead the writing on it says “left wing nut job”. And when it’s a slow news day or they need some filler for a hate speech they look in the mirror and write what they see.

But I hope the thread won’t get too distracted by comparisons between left and right wing propaganda. Everybody has a lunatic fringe, but as the article @ChickieD linked demonstrates the right wing “fringe” is very much front and centre. I would normally try to avoid reading garbage from the left or right, but at the moment the right wing garbage has walk-in access to the Oval Office. It’s setting the agenda.

This narrative, this victim narrative, I had a huge thread on that earlier in the year during the election cycle. And here it is again, wah wah wah, people are not recognizing how great Trump is. We are the victims. They buried the lead.

At its root, I think this is what is being fed to the rabble, confirmation that they are not respected. They are right but they no one sees it. They are better but they aren’t allowed to be the stars, even when they actually have all the power.

I’ve noticed that many Trump supporters tend to be huge Conspiracy Theorists. They like to think they can see things others cannot. I don’t know if it’s because they are better people, smarter people, or are clever enough to read the right websites, but there it is. This includes the “we are victims” mindset.