Ace of Base? Crypto-fascists?

The fact that one of band members used to be in a neo-nazi band is not in dispute, apparently:

Ace of Base's Secret Nazi Past

Before he founded Ace of Base, Ulf Ekberg was a neo-Nazi skinhead. Did Ekberg use Ace of Base's success as an opportunity to erase his neo-Nazi past and rise to a position of geopolitical influence? 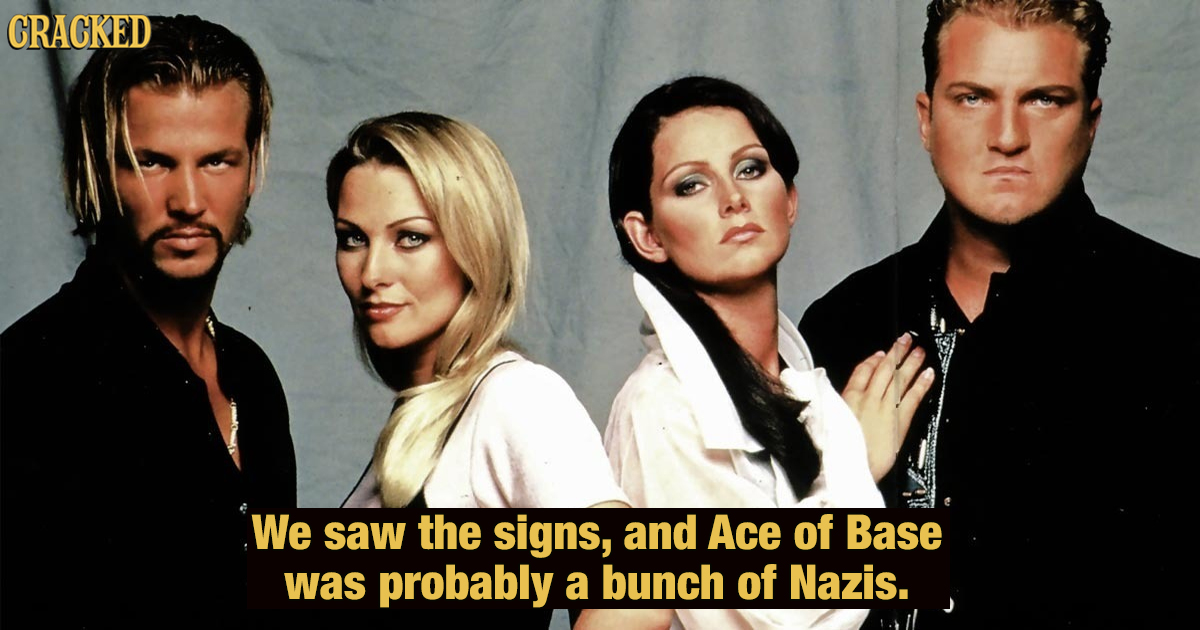 How A Pop Band Tricked 9 Million Americans Into Being Nazis

Do you remember Ace of Base? I should tell you something: Ace of Base was probably a bunch of Nazis.

How did this story not get more attention? It’s so weird.

The Vice story or the Cracked one?

I did see Boyd Rice, opening up for Death in June. So there’s that. Despite all their imagery, you’d be hard-pressed to call DIJ a pro-Nazi band.

But Ace of Base is different - Rice, DIJ and Laibach are all playing with fascist imagery with varying degrees of sincerity, I think (with Laibach on one end and Boyd Rice on the other) - the guy from AofB is claiming he rejected white power ideology and is now reformed, but the article is claiming that the message is the same and the guy is a serious crypto-fascist.

The cracked story, which is kind of batshit, but plausible. I don’t think there is much to dispute in the Vice one - everyone agees the dude used to be in a white power band.

At a guess, I’d say because a) Cracked is mostly known as a purveyor of list-based dick jokes (their words!) and b) no one really remembers Ace of Base

Yeah, that’s true about cracked… though Winston Rowntree writes stuff there, and I like his work:

They actually do some excellent stuff - their series of interviews are in a league of their own (I’d link, but Cracked is blocked at work). Their unified stance against gamergoobers, despite the frothing in the comment section, was particularly endearing.

But that’s their way - come for the dick jokes, stay for the social justice

But that’s their way - come for the dick jokes, stay for the social justice

I think Rice is attracted to fascist imagery and enjoys winding people up. I suspect that deep down he isn’t a nazi or white supremacist, but he still may lead some down that path through his having flirted with the associated imagery and people. Sadly, he may not give a shit if he does.

As to Ace of Base, the Cracked article makes me think of some of the discussion of Leni Riefenstahl’s work and “fascist aesthetics” in a documentary about Triumph of the Will. In the documentary, it was argued that “fascist aesthetics” weren’t always easily distinguishable from “Western aesthetics.” For example, some of the iconography from her Olympics films has definitely been absorbed into mainstream fashion photography. Perhaps the potential fascist reading of AoB’s rather banal lyrics merely reflects the dark potential underlying Western culture. On the other hand, perhaps it just shows how you can use close reading to really take the piss.

Have you seen the spoof litcrit readings of the Mr Men books?

Classic Aussie punks Radio Birdman, also secret Nazis: those armbands, the red and black logo, the song “New Race”, and don’t get me started on the hidden fascist imagery in “Aloha, Steve and Danno.”

Rice, DIJ and Laibach are all playing with fascist imagery with varying degrees of sincerity

The video for Laibach’s cover of ‘Live is Life’ is a nice illustration of this. Poe’s law notwithstanding, I think it’s fairly obvious they’re taking the piss.

I think the Cracked article is planted firmly in tongue-in-cheek territory. Not sure of the author’s intentions, but to me it feels like sort of a case study in conspiracy theory thinking: how plausibly can one reverse-engineer “evidence” to confirm a predetermined bias you want really hard to believe to make sense of the world and convince others of (pop band secretly a nazi front, in this case). Fairly plausibly, I’d say, which is why we work really hard to make sure science doesn’t work that way.

In the same vein: I found the first comment on the website, revealing THE HIDDEN TRUTH in the author’s name, amusing enough to quote in full here.

Adam: The first man alive, according to the Bible. Naturally, racist assume that he was white as new-fallen snow, and Nazis believe he was blonde haired and blue eyed. Just for the record, they believe that the other races came from Cain, who’s “mark” was supposedly black skin in the racist mind.

Tod: GERMAN for “Death”. He isn’t even subtle with this one!

Brown: The color racists believe that every non-white person has for skin.

Therefore, Adam Tod Brown’s name really means “The White Aryan Kills Brown People”. ATB’s name gives him away as the REAL Nazi! All these wild accusations at Donald and bands nobody remembers are just to throw us off his track.