“Any animal we can come up with that would be walking at 3:40 in the morning, wouldn’t walk this way,”

The logical explanation is that the security camera is crap.

and since there are no extant bipeds capable of running across backyards at odd hours (covered with a blanket) then: it must be a dinosaur! (“At least needs a banana, y’know, for scale”)

I can’t even tell its a biped from that video. Given the plethora of native and feral creatures in Florida, my guess is pre-dinosaur. Small gator.

Do you get roadrunners in Florida?

Or maybe a rather large chicken?

Either way, technically a dinosaur.

Not that there aren’t tons of dinosaurs in Florida, but that looks like a quadruped to me.

It’s not a non-avian dinosaur because its tail is too short.

Maybe a Caracara, which are native to Florida. 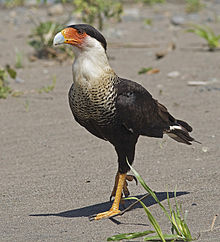 and see text Polyborus Caracara is a genus in the family Falconidae and the subfamily Polyborinae. It contains one extant species, the crested caracara; and one extinct species, the Guadalupe caracara. The South American Classification Committee of the American Ornithological Society has voted to again merge the two, retaining C. plancus as crested caracara. The taxonomists of the International Ornithologists' Union have also merged them.

My extant Florida biologist says it is a “yellow crowned night heron” and the news media can’t even get simple biology straight.

Wow. Even among the thoroughly annoying genus of clickbait videos, that is a particularly annoying example…

The movement and shape looks like an iguana hauling ass.

The only problem with that theory is that iguanas don’t tend to haul ass. But they do live down there, and they are dinosaurs.

Not familiar with that area, but are there any cursorial birds running about there? If so, she did indeed film a dinosaur, just not the one she thinks she did.

But they do live down there, and they are dinosaurs.

Iguanas are reptiles but not dinosaurs, and how they move is actually one notable difference, since their legs go out to the sides. I’ve seen them run though more as a sprinting kind of thing.

Do they have very IR reflective heads? A lot of the frames show a large highly reflective area near the head.

My personal guess is that it’s an animal with a bag over it’s head. If you’ve ever see a cat get their head stuck in a bad, they just pick a direction and start running at full speed. It’s not pretty when they eventually impact something solid. My poor dumb kitty.

Yeah, the still makes it look bipedal, but the video makes it seem like a quadruped - it could be a gator with a whooole lot of video distortion and artefacts. Looks like we’re seeing some reflection off its (side-facing) eyes at the beginning there, which suggests gator, and they’re active at night. Plus, Florida.

“Decide for yourself” is always a red flag.

And what’s with this trend of shitty-sounding speech synthesis in place of an actual person reading the copy? My GOD it’s annoying.

My mind immediately went to some type of bird as well.

It’s Elvis. I watched it twice to be sure.