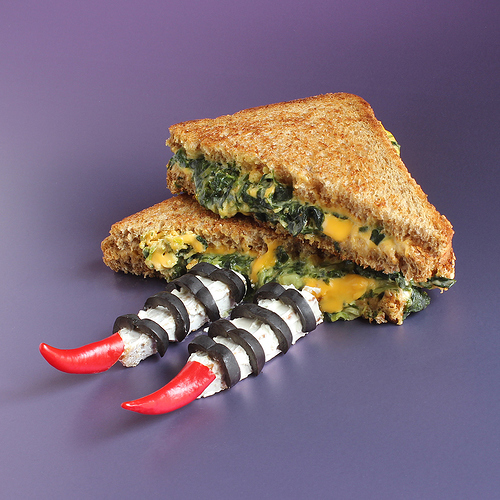 (Note: obviously the diversity hinted at in this GIF is way off but otherwise I think it sums up the matter nicely.)

I guess you just can’t find good help these days.

So much for only hiring the best people.

Seems to be official, and supposedly Bannon already resigned two weeks ago.

Wow those Knives keep getting Long(er) every Night.

I wonder if the current renovation work that’s taking place at the White House includes installing a revolving door.

Which helps explain his bizarre call.

"A source close to Bannon added: “This week is a good window into what Bannon outside the [White House] would look like: A strong defense of POTUS and ‘fire and fury’ for enemies of the Trump agenda. Get ready for Bannon the barbarian.” -NYPost

It’ll be interesting to see if he jumped ship or walked the plank.

He and DT agreed on August 7th what to do. The story is that he submitted his resignation on August 7th. Then just a couple days ago, Bannon gave a wild, unsolicited phone interview (like Scaramucci did) with a vacationing Robert Kuttner which was full of stuff contradicting the President. As soon as I heard about this, I knew Bannon was on his way out within days. If people think that phone conversation was not orchestrated, they are not paying attention. Bannon’s price for exit is falling on his own sword.

My reads for the month are done. The bit I can see before it blanks doesn’t seem absolute and official.

Huh. I think they switched the limiter off for it now.

President Trump has told senior aides that he has decided to remove Stephen K. Bannon, the embattled White House chief strategist who helped Mr. Trump win the 2016 election, according to two administration officials briefed on the discussion.

The president and senior White House officials were debating when and how to dismiss Mr. Bannon. The two administration officials cautioned that Mr. Trump is known to be averse to confrontation within his inner circle, and could decide to keep on Mr. Bannon for some time.

The bit I can see before it blanks doesn’t seem absolute and official.

“Mr. Bannon’s dismissal followed an Aug. 16 interview he initiated with a writer with whom he had never spoken, with the progressive publication The American Prospect.” NYT

Wait, I thought he only had the best people? Why does he keep firing all these great people?

Trump will blame others for all this; he thinks we have short memories.

he thinks we have short memories.

We (as in the collective electorate) seem to.

What a spectacular shit show you people have going on down there. Spectacular.

Bannon’s price for exit is falling on his own sword.

Seems like that phone call was a gift to himself… is that what you mean? He’s trying to establish distance from the ‘globalist’ direction the WH is expected to take now that he’s gone. Trump will probably go for conventional GOP economic and military policy and Bannon wants it on the record that he’s against it…

drinks ( or other intoxicants as suitable ) all around !!
also , BINGO !!!

Breitbart is finally running the Bannon news on their site. But their source? @maggieNYT https://t.co/Sj1UjYYyye 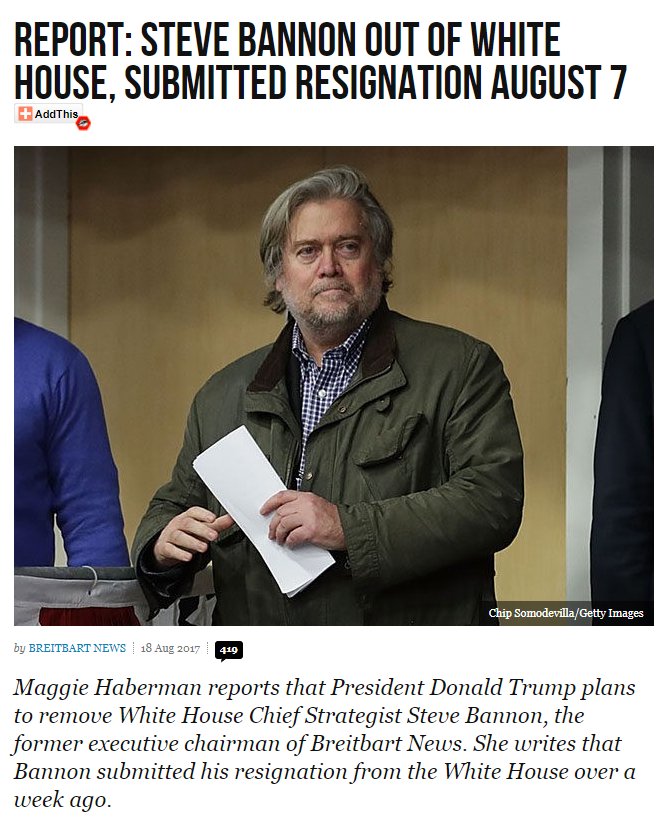 And they have a flashing banner too! lol

What will they do without a chief of strategery?

In a lovely burn, CNN made it a point earlier to note how with the exception of 45 and Pence, all of 45’s Dream Team in this photo (taken soon after inauguration) are gone. 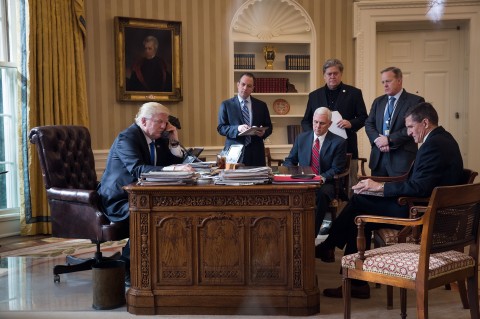