I always think of this sort of thing as American, but is it unique to America (and its hat, Canada)?

Sorry, Canada doesn’t know anything about America’s hats (other than they seem to be tinfoil…). 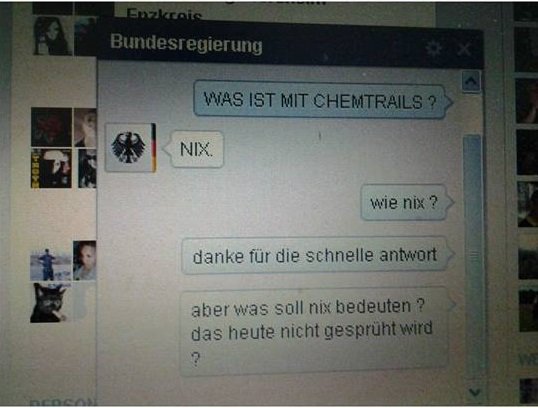 guy: WHAT IS IT WITH CHEMTRAILS?
gov: NOTHING
guy: how nothing?
guy: thanks for the fast reply
guy: but what does nothing mean? that today will not be sprayed?

“nix” is an informal variant of “nichts”, gives an even better hint what the person behind the government account thought of the question

Maybe we’re made of tinfoil…

Sadly it does not… maybe it is a conspiracy?

I have in-laws who, in full faith, believe American patriots are being held in FEMA camps (every natural disaster is exploited to round up dissenters). Here they are forced to manufacture U.S. military uniforms for European NATO soldiers for when the government enacts Marshall [sic] law and needs a police force willing to execute Americans (insert obvious comment about watching the news). It’s why the military switched from 30-06 rounds to 5.56, so there wouldn’t be hiccups in the supply chain.

On chemtrails they don’t profess to know, but are “just asking the question.”

They’re preppers building the family compound in the Caribbean. We all live in Florida. They don’t have a boat for the SHTF moment, and none seem to have noticed this; guess they’ll take the first flight out when the jack boots come, and hope the “natives” they’ve heaped scorn upon haven’t taken up residence in their stronghold.

They are a clannish, insulated family who actively punish members who question the patriarch or seek outside relationships. My sibling marrying in caused a four year expulsion for their spouse. It was only the emotional need for contact with Spouse’s siblings that spurred acts of contrition to gain readmittance. To this day Sibling and Spouse endure what I would call abusive behavior.

They insist they are persecuted as Christians (Primitive Baptists). The rare inter-family interactions sure are a hoot.

Whew, it sure feels good to tell that to somebody.

who, in full faith, believe American patriots are being held in FEMA camps (every natural disaster is exploited to round up dissenters)

To this day Sibling and Spouse endure what I would call abusive behavior.

this sounds horrible! I hope you can still maintain a (more or less healthy) relationship with your sibling

Thank you, and I do. Certain topics are completely off limits. After realizing direct confrontation was pointless and damaging, I have quietly and (I hope) non-judgmentally expressed my concerns and willingness to listen. That was quite a stretch for me, as I usually view tension and confrontation as tools that have their proper uses.

From now on it’s Marriot all the way.
I’ll feel much safer knowing there’s now less chance of having a conspiracy nut next door.

believe American patriots are being held in FEMA camps

Anyone who thinks Americans are being held in FEMA camps has never dealt with FEMA. If there’s a more clueless government department, I don’t know what it is. If they had to build a prison camp, they’d build the same fence around one half twice, leave the other side open, and call it Mission Accomplished and bonuses all around.

Seriously. I have a friend who lives in a Katrina-era FEMA trailer in Slidell Louisiana that FEMA never took back. Why not? Official reason, on paper and everything: it’s not a FEMA trailer because it doesn’t have the right kind of front door.

You mean you wouldn’t appreciate this soothing piece after a strenuous day of business meetings?

I don’t think those that conduct their business in the room would like it either. Well, hazard pay might help.

The chemtrails are real and it is not exhaust vapor. This article may be a joke but tell me why we need more C-130s for “domestic aerial spraying” at the Youngstown Air Reserve Station according to Senator Ryan and Portman (R-OH)? “The current number of eight C-130H aircraft jeopardizes the 910th’s capability to effectively complete overseas tactical airlift missions and domestic aerial spray operations simultaneously.” https://timryan.house.gov/press-release/members-ohio-congressional-delegation-urge-air-force-upgrade-c-130s-youngstown-air

Right because unpressurized low flying MILITARY PROP PLANES are the exact same thing as commercial jumbo jets… and oh maybe using them for water drops over forest fires which is what the air reserve does a lot or possible pest control spraying at low altitudes is the exact same thing as dumping mind control chemicals at an altitude that would make it useless by the time it reached the ground if it ever does.

Hell it it isn’t even exhaust vapor it can be just vapor from the air under the wing being ■■■■■ enough that it forms water droplets from the increased air pressure. Hell you can fucking do this with your hand out a the window of a fast moving car on a really humid day.

The trails left by jet aircraft are condensation. C130’s are prop planes, and the spraying they are referring to in the link you provided is for mosquitoes. It’s like crop dusting, and the chemicals settle, they don’t leave trails.

You have opened my eyes.

The chemtrails are real and it is not exhaust vapor. This article may be a joke but tell me why we need more C-130s for “domestic aerial spraying” at the Youngstown Air Reserve Station according to Senator Ryan and Portman (R-OH)? “The current number of eight C-130H aircraft jeopardizes the 910th’s capability to effectively complete overseas tactical airlift missions and domestic aerial spray operations simultaneously.” https://timryan.house.gov/press-release/members-ohio-congressional-delegation-urge-air-force-upgrade-c-130s-youngstown-air

See, this is something I don’t think chemtails people understand: Why are these undetectable? I did chemical analysis for my watershed as part of a university stream monitoring program and we looked at organic compounds in the water. If these are being sprayed with the frequency people claim they are, why can’t they be detected by some asshole chemistry or biology grad student in a lab somewhere? Don’t claim that these are cleverly made so as to be undetectable. If it’s there in any quantity, we’d see it. No chemical is undetectable, as anyone who tests for drugs will tell you.

Maybe read up on what those “aerial spray missions” entail? They aren’t done at high altitude for one thing.

The sad irony is that planes (and cars, and trucks…) really are dispersing chemicals that are changing the Earth’s atmosphere. Mostly CO2. But as long as it’s invisible, there’s no problem.