I’m trying to figure out how you can be “allegedly” caught on tape doing something. 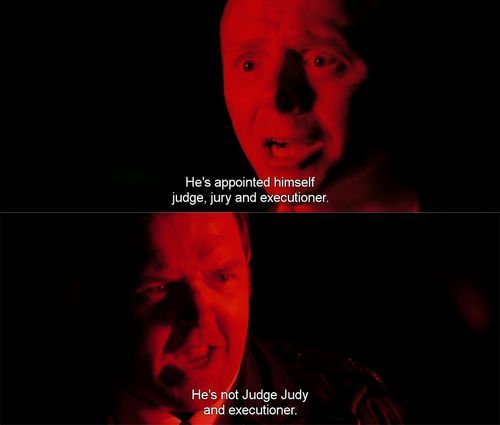 The first step is going to have to be the police admitting they have a problem.

They need to start “Executions Anonymous.”

I remember a Charles Rodrigues cartoon, where the TV news is showing a clip where the bullet is seen to go from the gun through the victim’s head and out again, with the assailant labeled “alleged killer.”

The officer who shouted “you shot at us” was actually shot at…by two other officers down the street. They shot at the Jaguar that O’Neal was driving as it came between them. They continued shooting at the car after drove past them and continued on down the street away from them. They were also shooting directly at their fellow officers, whose car was at the other end of the street. More details here.

Jesus, what a total and complete clusterfuck on the part of the police, with this guy paying the price. The cops will probably get promotions out of it…

While there are likely different configurations, I looked up one popular camera (Taser Axon) https://www.axon.io/products/body2 and it’s simply a on-off switch, volume, and an ‘event’ button.

When on, it buffers 30 seconds of video (not audio) which will be added to the file if the officer pushes the ‘event’ button to record. Unless supervisors have disabled the buffering feature.

They felt obliged to put in this sentence…

“Note: An event not recorded by the camera cannot be downloaded or played back.”

That’s kinda useless. I sort-of get the need for buffering, but having to remember to press the event button is practically begging for anything interesting or controversial to disappear down the memory hole.

Having a 4G link on every camera might get a bit spendy, so why not tether them by radio back to the car, which can have a sealed hard drive as big as you like, permanently recording everything.

It’s a total mess. The Superintendent has said that it “appears that departmental policies may have been violated.” The officers involved are on administrative leave and an investigation is underway. Emmanuel has come out in support of the decision to revoke the officers’ powers. While I loathe the man, he is the mayor, so that’s something.

When I read about cops shooting at each other, it reminds me of

SEATTLE (AP) - City police officers in two cars fired more than 20 rounds at each other at an intersection after they got confused and mistook each other’s vehicles for a stolen police car that zipped away on Interstate 5.

Nobody was hurt, but one of the cars was described as riddled with bullet holes.

Yes, it’s simple to forget, simple to set. Hard to speculate, it’s just waiting for a supreme court case to set standards for camera-‘event’ protocols. The switch is manual, for now.

I cannot fathom the mindset that allows these cops to high-five each other while an 18 year old dies in front of them. That’s just depraved. The whole damn situation is handled horribly from start to finish in every possible way. Chicagoans need to turn their local government upside-down. Protest every day. Demand accountabilty.

This is a good example of how body cameras help, AND do not help. It is not the magic panacea some claim it to be. Body cameras are just one small part of the reforms necessary.

You can all start writing to me in all caps now, but here is a perspective. I personally believe that shooting at a fleeing suspect is completely unnecessary. I am not as worried about the high fives, as People have different and often apparently inappropriate reactions to the conclusion of a stressful event. My experience is not as a police officer, but as a Marine. But the point I want to make is the law in Illinois about deadly force explicitly allows deadly force to prevent the escape if the suspect is being arrested for a forcible felony involving the threatened infliction of great bodily harm. There is more to the law, but here is the text:

(1) Such force is necessary to prevent the arrest from being defeated by resistance or escape; and

(2) The person to be arrested has committed or attempted a forcible
felony which involves the infliction or threatened infliction of great
bodily harm or is attempting to escape by use of a deadly weapon, or
otherwise indicates that he will endanger human life or inflict great
bodily harm unless arrested without delay.

None of this addresses the issues of body cams not being on, or the Chicago PD rule about not shooting at cars. I just thought the text of the law provides some context, as I assume the officers involved were trained in it.

That’s a feature, not a bug.

I appreciate some good snark

but that’s kind of the point, right? What’s the purpose, and who is the camera for?

Chicago PD has put the body-cams and car-cams (well, those that were turned on) online at Vimeo. Body-cam 1 and 2 were there during the chase, 3 and 4 are latecomers.

Two things of note: (1) how reckless those officers are in almost shooting at each other, and then at the car down the street. (2) The way the first guy stands at, and then goes over the gate, suggests he at least had no concern that the guy was armed, because he put himself in a horribly vulnerable position.

I can kind of understand giving each other fives, purely from an adrenaline/glad you’re not hurt point of view. As an Australian it blows my mind how quickly and recklessly they discharge their weapons, and how little concern was shown about ‘the perp’, when it was obvious he was shot and bleeding from his torso.

What’s the purpose, and who is the camera for?

Here in Germany it’s very clear: The few camera-on-cops projects are with manually triggered bodycams and the purpose is to collect evidence against “customers” of the police. If an officer is/feels* threatened they should switch on the recording for a more effective prosecution.

afaik the success of the projects was so far not evaluated, but the political will is unambiguous - it’s about violence/rule-breaking against LEOs, not by LEOs.

* the line is blurry 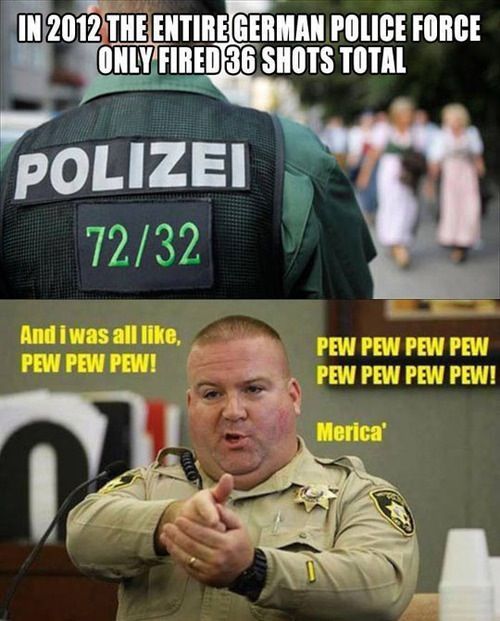 small correction: the 36 bullets are shots directly targeted at other humans (shoot-to-kill/shoot-to-wound).

the complete statistic is a litte bit different (page 5, compiled by a prof of the Hessian police university)

* mostly not-quite-roadkills
** e.g. shots at a driving car with the chance to hit the driver