Originally published at: Desantis to block $35M in funding to a Florida sports team over their commitment to gun safety | Boing Boing

OK on the one hand I’m usually against taxpayer money being used to buy lavish facilities for privately owned for-profit professional sports teams but seriously what the fuck, you bigoted child-murder-championing ghoul??

The Villages is having quite the BBQ tonight.

Fuck that guy. (In the non-Biblical sense.)

It’s the fascist way: ruthlessly punish those who oppose the party line, reward those who support it with sweetheart deals. Putin would be proud of Desantis. 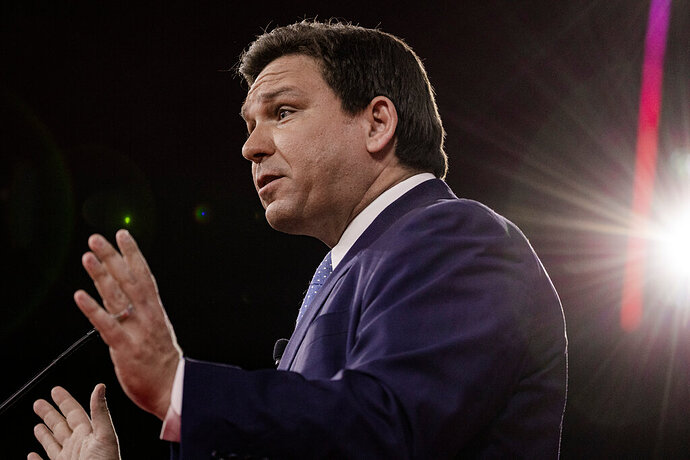 The Florida governor is using state power to fight the culture war.

Predicting a DeSantis - Trump ticket for '24.

Which Trump would accept the Veep spot?

Does it matter? If trump is VP he’ll play golf 100% of the time anyway.

In Florida, $50K and some words gets you nothing.

Stop it – the concept makes me nauseated.

Man, he is pissing off big business left and right.

How many red hats is he going to have to sell to make up for the loss of corporate donations? Even people he hasn’t pissed off is going to see that contributions don’t guarantee results.

Stop it – the concept makes me nauseated.

Agreed. The 2024 race is going to be a shit show and DeSantis will be part of it.

How many red hats is he going to have to sell to make up for the loss of corporate donations?

I read that as “…for the loss of corrupt donations” and then realized that it made a lot more sense that way.

Evidently, DeSantis got 45% of the vote in Hillsborough County (home to Tampa) in 2018, when he won the state by a razer-thin margin.

Boy, the Florida government sounds more and more like the Mafia with each passing year.

pretty sure it [Tallahassee] has always been in the hands of organized crime syndicate.
look no further than MoRon’s predecessor, skeletor scott, the medicare fraudster.

MLB, why not move out of the spring training facilities located in Florida for the Grapefruit League?

Similarly NCAA, please pull the first and second round games for the 2023 Division I Men’s basketball tournament from Orlando (and the Final Four from Houston, while you’re at it) for their assaults on the rights of some of your athletes, like you did in 2017 due to North Carolina’s “bathroom bill”.

Fascists and gangsters have a lot in common.

Even though we have recently escaped a national petty dictator, that doesn’t mean each state can’t have it’s own.

That’s just where we are in the US now. We can’t make fun of incompetent governments like Greece or Italy or Argentina or (insert country here), because we are at least as bad. I’m not sure how it ends, but it looks like it’s going to have to get at least a little bit worse before it gets better.