She sure ain’t funny no more.

Why is Jarrett in the crosshairs to begin with? I have never heard of her before today.

At first, I hoped the new show was All In the Family territory where we get to all laugh at the lovable bigot and watch them grow to be a more decent human being. Archie was the butt of the joke as a throw back to a more intolerant time. It showed America what bigotry looks like and took the solid stance that it was not acceptable.
This new show is not that. It’s just right wing talking points cleverly disguised as bigoted trash.

Well betting pool on how long that reboot stays on the air?

It’s kind of amazing how someone who theoretically built an entire career out of being funny could deliver such a horrible “joke.” It’s like watching a bestselling novelist leave a string of misspelled racist comments on a Youtube video.

She’s talked about how Trump was taking down a government pedophile conspiracy, which I took literally, and assumed she’s nuts. But recently she was tweeting about the arrest of British racist Stephen Christopher Yaxley-Lennon (aka “Tommy Robinson”), attributing his arrest to an international pedophile conspiracy, so now I’m wondering if “pedo” is just her slur against anyone who opposes the alt-right. So I’m wondering how much is pure malevolent asshole and how much is crazy.

Well betting pool on how long that reboot stays on the air?

It’s popular, so… until it’s no longer popular. As John Rogers put it:

Well, I do at least enjoy things like this, that puncture the whole “Hollywood is a bastion of liberal SJW”. Hollywood is a nest of massive corporations 1000x more cynical than a megachurch huckster or Big Pharma.

In another series of tweets that morning, Barr also attacked liberal billionaire George Soros [after falsely claiming Chelsea Clinton was married to one of his nephews]

She then continued, “By the way, George Soros is a nazi who turned in his fellow Jews 2 be murdered in German concentration camps & stole their wealth-were you aware of that? But, we all make mistakes, right Chelsea?”

As with all who play footsie with the alt-right, she’s taken the inevitable next step from bashing Muslims to dabbling in anti-Semitism by spreading calumnies against the “wrong” kind of Jew: the wealthy rootless cosmopolitan puppetmaster bogeyman spreading (((alien))) ideas.

Sooner or later those Jews who enable or make excuses for right-wing populism become kapos. 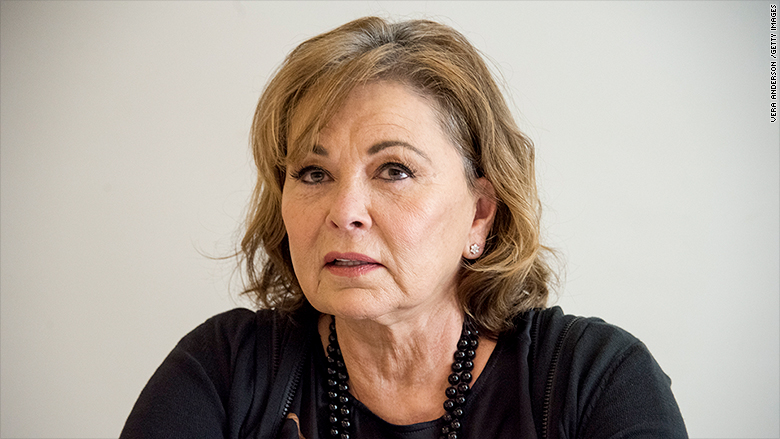 Let’s see if the other talented comedians on the show follow Wanda’s lead (I’m looking in particular at you John Goodman and Laurie Metcalf – show us you’re better than this). And while Sara Gilbert’s sentiment is appreciated, Barr is more than just “one cast member” on the show named after her.

It’s a good thing we didn’t put her on too high a pedestal or else we might feel the need to throw her in a pit to make up for our mistake.

First off, her comments are repugnant and should be widely condemned. I’m glad that Wanda Sykes left in protest, if not a little sad that she won’t be a contributing factor anymore.

That being said, I have seen all but the last episode and somehow I just don’t get all the outrage. Roseanne was always a pretty awful character both on the show and IRL. I think people are selectively remembering the lesbian kiss and other cultural milestone moments and kind of whitewashing the fact that she was an abusive rageaholic and would arbitrarily insult and demean people based on damn near anything. People seem to be mystified as to how a person could change so much in a couple decades which fails to recognize that a) the actual Roseanne seems to have changed even more than her character and b) a whole damn lot of boomers have been brainwashed in that timespan and are behaving just like she is (except, being that it’s Roseanne, most people couldn’t muster half the vitriol she seems to have been born with).

The show is depicting a version of America as it is now just as it depicted a version of America as it was then. It is also doing it in a fairly balanced way, IMO. People ripped her for the episode where she suspects her new Muslim neighbors as terrorists, but ignore the fact that he whole narrative is orchestrated to make her character the fool (though she gets to exonerate her character in the end).

I grew up poor in the Midwest and remember thinking how weird it was that everyone on TV seemed to be wealthy, lived in nice houses and had stable jobs. Roseanne was massive for people like me as it depicted an America rarely, if ever, seen. I guess I never expected the new Roseanne to depict a noble character and have been pleasantly surprised at how it’s done examining the issues.

For better or worse (ok, much, much worse) this is what America looks like right now and Roseanne is doing what it always as done. She’s a total shit, but I feel like we’ve always known that.

A long while back I took my Mom to see Johnny Mathis and Roseanne was the opening act. This was before her original TV show. When she opened her mouth in that whiney gravelly voice “Men are such pigs” she got a few laughs but it went down from there. Even my Mom didn’t like her. Fortuanly it was a short act, and Johnny Mathis is a fine singer.

Of course, Michael Harriot says it much better than I:

“By putting Roseanne on TV, ABC isn’t normalizing Trump-supporting racists, any more than Fox News normalizes mediocre, tapioca-pudding-flavored whiteness by including Tucker Carlson in its lineup. They exist. They are the whole reason we have a president whose IQ is smaller than the circumference of that herpeslike thing that keeps popping up on Michael Rapaport’s face.”

Although I might be in the minority of black people, I am willing to admit that I love ABC’s reboot of Roseanne. I haven’t watched a single episode—nor do I plan to—but I like the idea that it exists.

Holy shit, they cancelled her show.

ABC has pulled the plug on the revival “Roseanne.” The move comes after series star and creator Roseanne Barr made a comment on Twitter Tuesday morning referring to former Obama aide Va…

She sure ain’t funny no more.

Variety magazine reported a few minutes ago that ABC has canceled the Rosanne Show. 'Bout time!

For someone with such an affinity for alt-right a-holes - she chooses to live in the most Democratic and arguably the most progressive state instead of a right wing stronghold or even compound.

I guess her safety is more important than others.

Maybe we’ve had enough of this shit? Anyone at ABC care to bring this spirit to the newsroom? Anyone?

I’ll bet her fellow employees are quite pleased with her.