In violation of his new moderation edict, issued shortly before:

From the article: "The rules do state that users may not use Twitter’s services “for the purpose of manipulating or interfering in election of other civic processes.” (I assume the typo is sic, since Twitter has apparently fired any and all people that do QA of any sort) Cool! So no politics are allowed on Twitter at all since any engagement in politics is, ultimately, an attempt to influence an election. Maybe they accidentally did figure out how to fix Twitter. I assume that the accounts o… 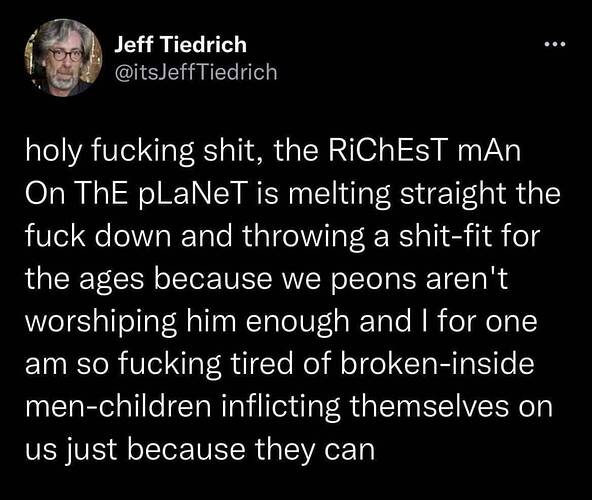 Ugh, the “I am very rational” sludgy veneer of “Balance of Power” makes me gag, on top of everything else that sucks about this. A blazing apotheosis of “Enlightened Centrists” smugly fast-tracking fascism in a “logically bulletproof” suppository.

I am tired of this timeline.

Can we get a retcon where the FBI did not interfere in the 2016 election, and perhaps even stopped the Russians from interfering?

Knowing I am asking for a lot, I would also not mind a retcon where the conservative party had not lost its mind. I fear that would require a retcon of Nixon’s Southern Strategy, and a retcon of the reaction to Roe v. Wade, which may be too much to ask of a retcon.

…shared power curbs the worst excesses of both parties…

I suppose this canard might work on a small subset of “independents” who’ve had their heads deeply rooted in the sand for the last 20 years; but EVERYONE else knows this results in nothing getting done.

And I don’t believe this is the result of idealism from Musk — he knows EXACTLY what he’s doing, and what he’s setting the US up for.

Scratch any self-described Libertarian in America and you’ll find a Republican underneath.

Wear protective gloves before you scratch.

You are too kind to him.

Does “shared power” mean proposing impeachment hearings when you haven’t even said what you’re impeaching the president for yet?

Politics is supposed to be about managing the needs of the population. “Revenge” is not really good for that.

Shared power curbs the worst excesses of both parties

Too bad Republicans are like Sauron in this regard.

Or one of those metal claw things that baddie wore when he fought Bruce Lee?

I really hope everybody who isn’t already in on the alt-right bullshit knows not to listen to this pathetic bigot, and it helps inspire more action again him. Fingers crossed.

OH nooo… I didn’t see this Tweet before I voted today! Sorry, Elon, I dun goofed!

That’s ok! You can easily vote again, as several (indicted) conservatives have proven