I think we need to get some fake spoilers for Star Wars: The Force Awakens circulating just to make sure there’s enough misinformation out there to counteract the real spoilers which are sure to hit the scene shortly. I’ll start:

I was surprisingly affected by Han Solo’s death, never saw the betrayal of him by his younger brother coming (and what an awesome bit of casting it was to get Bill Murray in that role!)

Having Luke Skywalker stuck in the time vortex for the whole movie was a bit of a cop out, though.

I am very uncomfortable with this reboot-masquerading-as-a-sequel.

Alderan was never destroyed? The force is little organisms in your blood? The Ewoks are “cute” and “alive”?!?!?

WTF is this bullshit?

I thought it was okay up until the 10 minute long basketball scene (yeah, I know, “space ball”) between Poe Dameron and Chewbacca, in which BB-8 gets mistaken for the ball.

Oh, and the way that Luke was hiding in BB-8 the whole movie? That was quite the plot twist.

Synopsis. Decades after the Empire’s defeat, a new band of Rebels must stop the Empire from doing the same thing again.

Tagline. What Awakens? It is the Force.

I loved the part where BB-8, R2-D2, C3-P0 and the Gonk droid joined together to form Voltron.

Having Luke Skywalker stuck in the time vortex for the whole movie was a bit of a cop out, though.

I’m ok with the vortex, however having the vortex triggered by a quantum collapse of probability states when definitive proof of “who shot first” was discovered seemed like a pretty contrived plot point.

From ‘Secrets of Star Wars and the End of Everything’

Luke Skywalker’s wife died at the end, and he married his ‘Auntie Robin’.

I never expected that Kylo Ren was actually 3 ewoks in a trenchcoat!

Huh, so Vader was Luke’s dad. Who knew?

Huh, so Vader was Luke’s dad. Who knew?

Oh, come on. We have to keep these plausible.

What a time to run out of likes!

It was great but having a Klingon bad-guy was just terrible, I think JJ Abrams must be confused.

We had E.T.s in episode II, so what’s the harm? Better a forehead-appliance than another CGI villain any day! 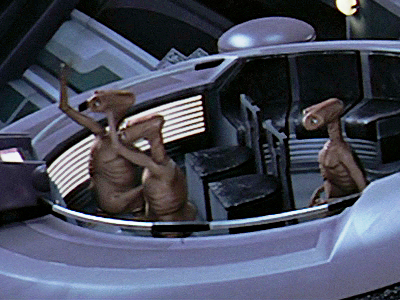 We had E.T.s in episode II, so what’s the harm?

E.T. was already part of the Star Wars universe. Aside from his obvious mastery of the Force, why else would he have recognized Yoda (during the trick-or-treating scene) or associated him with “home?”