I can not wait to vote one into DC, we’ll see some changes post haste.

That’s Andy Serkis out of a job soon.

I have a theory that one’s chance of making a civilization-ending mistake is directly proportional to how much foundational science fiction one has experienced. “What could possibly go wrong?” isn’t something that nerds ask in a serious tone.

“And even when the apparatus exists, novelty ordinarily emerges only for the man who, knowing with precision what he should expect, is able to recognize that something has gone wrong.”
― Thomas S. Kuhn, The Structure of Scientific Revolutions

The Underpeople, animals modified into human form and intelligence to fulfill servile roles, and treated as property. Several stories feature clandestine efforts to liberate the Underpeople and grant them civil rights. They are seen everywhere throughout regions controlled by the Instrumentality. Names of Underpeople have a single-letter prefix based on their animal species. Thus C’Mell (“The Ballad of Lost C’Mell”) is cat-derived; D’Joan (“The Dead Lady of Clown Town”), a Joan of Arc figure, is descended from dogs; and B’dikkat (“A Planet Named Shayol”) has bovine ancestors. 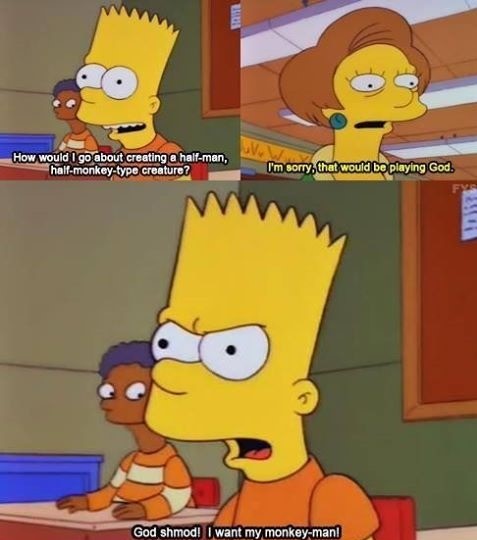 If elected…no home will be without a banana.

You don’t need fancy gene manipulation to screw things up. People often create stupid hybrids that end up becoming “established outside of cultivation.” Look at the Callery Pear for just one example. I don’t think there’s much chance of convincing the world to stop doing chimaera research. Someone, somewhere, is going to do this, and it’s only going to be crazier with CRISPR.

I ask you to pass legislation to prohibit the most egregious abuses of medical research - human cloning in all its forms: creating or implanting embryos for experiments; creating human-animal hybrids; and buying, selling, or patenting human embryos.

Oliver the Humanzee must be rolling in his catacombs…

My initial thoughts went to The Island of Doctor Moreau too (the book, which isn’t great not the movie which I haven’t seen. And then I thought - “Don’t be such a fucking reactionary!”

So I reflected a bit further and remembered a Sci-fi short story where the protagonist, a wounded veteran of a Balkan war takes his love interest (who I think might be a nurse) to visit the baby pig that shares his DNA and will soon be killed to provide him with an organ which will be a match for him.

I still think the whole thing is icky, but its a more nuanced icky.

eh. When you examine things with a very fine lens one starts to realize the only thing differentiating human cells from non-human primate cells is a few base pairs of dna.
While I think moreau style human hybrids are bad, the reaction to this not even remotely related experimentation shows just how completely and utterly verboten something like that is, and it is my understanding the oversight and regulation on stuff like that would prevent research even approaching it.