The common thread in all of these so-called-god institutions is money. Sweet, sweet Jesus money. They all have payments coming up on their fleets of fancy cars, their docks of fancy boats and their hangers full of fancy airplanes. Lord knows their fancy stuff ain’t going to pay for itself, now is it?

So, come on down and pass the snakes, give what you can…

When these these conspiracy theorists start dropping like flies, they’ll invent the meta-conspiracy that this conspiracy was manufactured to fool them into not taking sufficient precautions against a very real virus. Thus, the conspiracy conspiracy. Although, strangely, they’ll end up blaming the same actors.

I say let them all get sick…

Question: are coronaviruses considered “fruits” for the purpose of knowing them by their fruits?

Because, while the biology seems touchy, I think you could learn a lot about someone by looking at their willingness to do this particular sort of gardening…

It would be nice if we actually learned from South Korea, but alas our superspreaders will only be stopped individually by MOF.

thing is, he was released shortly afterwards. so my bet is that he’ll have another service this week and continue his dangerous behavior.

If one person dies as a result of this little “get together”, that pastor should be charged with manslaughter.

Good. Throughout this public health crisis, religious fundies of many denominations have behaved extremely irresponsibly. Out of a combination of greed, a ticket-to-heaven mentality, and superstition, leaders of some of these communities have enabled the spread of COVID-19 within and without. There need to be serious consequences for posing a danger to the public.

What a stupid approach to combating disinformation. This guy is up there claiming there’s a NWO conspiracy to cover up the truth, and the authorities respond by locking him up for what he said? It’s obviously unconstitutional, but beyond that it’s worse than useless when it comes to slowing the spread of the virus. The coronavirus spreads from human behavior, and locking this guy up will not improve people’s behavior - it will actually worsen it.

Conspiracy memes are a lot like the virus, with one important difference: a meme doesn’t require physical contact to spread. If someone has COVID-19, you could lock them up, forcibly isolate them, and maybe that helps (although they’re still a person and they should be treated with dignity even if they’re infected).

Memes spread through information transfer, and you can’t stop that by arresting someone - in fact you make it worse. Because in the US, where we ostensibly have freedom of speech, anytime someone is punished for saying something that some people suspect might have some truth to it, that idea gets a ton of attention. It doesn’t matter that this guy has been locked up, the meme he was hosting has now spread much wider, and has plenty of new hosts to continue spreading.

Family in Tampa. Eldest one has stage 4 lung cancer. Still needs to go to doc appts, so can’t stay at home %100 time. Fuck all of these jack-holes. I hated the mega-church cults before this, but I’m really starting to hate them now.

and the authorities respond by locking him up for what he said?

unlawful assembly and violation of public health emergency rules, both of which are second degree misdemeanors

It’s pretty clear that this pastor’s actions were what he was arrested for. He can stand in his sanctuary and call his flock together all he wants. But when people actually show up, and he doesn’t disperse them in line with health regulations, he’s breaking the law. Or are you saying the arrest was the problem, and he should have been fined for breaking the law? Because I don’t see any reason not to penalize him for endangering his community.

Let them all gather in church, then quarantine them in. Whomever is still alive after a month has bragging rights.

No, the Jesus grifter wasn’t arrested for words. We’re in the middle of a health crisis, not a constitutional crisis.

Get that idiot down off the cross we need the wood for coffins.

The larger problem being, of course, that each of these people will come into contact with X number of other people after they dip themselves in the Holy Petri Dish.

This guy is up there claiming there’s a NWO conspiracy to cover up the truth, and the authorities respond by locking him up for what he said?

This guy was not arrested for claiming there’s a NWO conspiracy to cover up the truth. He was arrested for unlawful assembly and violating quarantine orders during a public health emergency. You recognize the difference, right?

It’s no different than if he were a restaurant owner who claimed the virus was a NWO conspiracy, and then proceeded to open his doors for a sit-down buffet dinner served to 500 people.

Plus to paraphrase Neal from The Young Ones, its too difficult to commit suicide by crucifixion. Getting that last nail in is just impossible.

Rodney Howard-Browne (born June 12, 1961)[1] is a South African-born American Christian evangelist and pastor of The River church in Tampa Bay. He has resided in Tampa, Florida since the mid-1990s. The River is considered both Pentecostal and...

eta: His Wikipedia article doesn’t have a picture. I think he’s been careful to keep his image out of the public domain. That’s a backfire since his Florida arrest photo is PD. 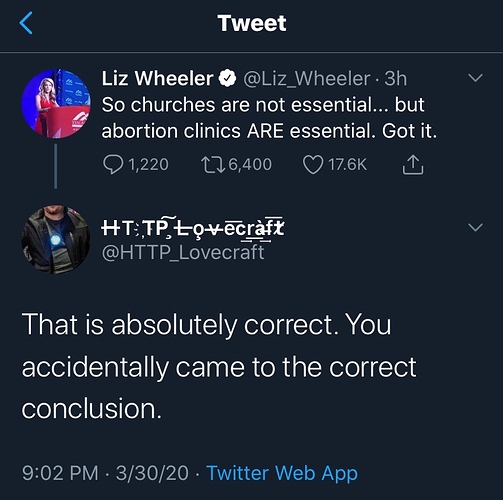 So Dave & Busters are not essential…but dialysis clinics ARE essential. Got it.