finally we will hear from “the guy that got the coffee”

Is there really any evidence that a single trump supporter would accept as real?

If Trump went on TV and said, “I did it, I did all the crimes, I’m guilty, I should go to prison,” his supporters would say he was just joking

They’re not the intended audience of these events

A lot of the witnesses ARE Trump supporters.

Many of them, no, but even if only 10% get deprogrammed, the world becomes safer.

Speaking of the documentary footage- wtf did he wait to turn it over? Why not notify the committee months ago

My totally uniformed guess would be he needed time to sort out potential legal issues - things like clear giving out the footage before the official release with producers, funders or whoever else has a stake in the documentary.

We can make dreams real

And indicated that, if he were the republican nominee, they would vote for him again.

Whatever spurred this new meeting is in the documentary footage or maybe Mo Brooks.

maybe it’s about ginny and clarence thomas now that all the supreme court decisions are in. that would make my day and then some.

Though a cynical part of me thinks there is nothing new, that the committee planned a “surprise” meeting as a tool to retain engagement.

honestly, id be alright with that. it’s not particularly nefarious and every little bit of media savvy helps

Speaking of the documentary footage- wtf did he wait to turn it over? Why not notify the committee months ago and say “hey, I have some stuff. You should subpoena it so I can hand it over with minimal risk.”

Perhaps the committee was aware of it but chose not to request it until all the verbal interview material was in… in case any of the testimony turned out to be less than forthcoming. Why have it get out and give people time to coordinate/adjust/adapt their stories?

In case anybody is wondering who the mystery witness will be, CNN is reporting it will be former Meadows aide Cassidy Hutchinson.

I’m hoping that the DOJ seizure of Eastman’s phone and the warrant served on Jeffrey Clark both have something to do with Ginni and Clarence Thomas.

Am i just dreaming that there’s a rule or law or something that declares SCOTUS justices installed by a criminal president illegitimate, and thus unseatable?

I see I’m not the only one wondering in that direction!

There is another link between the recent Supreme Court decisions and the January 6 attempt to destroy our democracy that creates an unprecedented situation. If Trump is prosecuted as the leader of an attempted coup, a coup that may have included some of those who voted for Trump’s three Supreme Court nominees, what does that do to their positions on the court?

June 27, 2022 (Monday) Midday today, the House Select Committee to Investigate the January 6th Attack on the U.S. Capitol announced a hearing “to present recently obtained evidence and receive witness testimony.” This is a surprise, and it was not until late tonight that reporters confirmed with their sources that the witness will be Cassidy Hutchinson, an aide to former president Trump’s chief of staff Mark Meadows. Hutchinson was the person who revealed that congress members had asked for par…

With how things have gone and my general cynicism about kinda everything I’m personally not going to celebrate just yet.

I’ll just assume the below until his luck finally does run out. 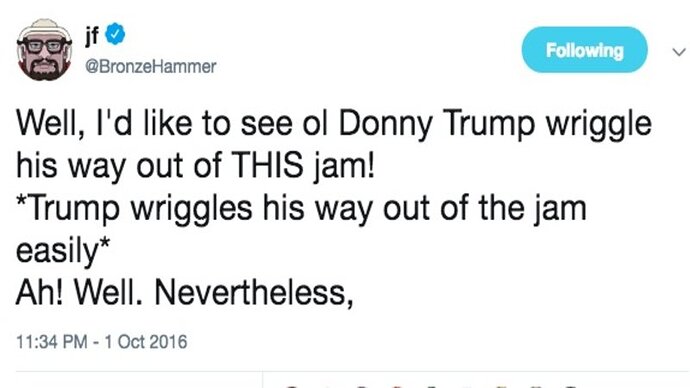 I assume that some to most of them are just saying that while he’s still the big dog. If he loses influence and more Republicans turn on trump, they would be happy to stab him in the back, if it improved their personal political fortunes. Trump would stab himself in the back if he could profit from it.

Well, he is an attention w*ore so tell him that hundreds of millions of people worldwide would be watching him as he bleeds and he would probably go for it.

William Shatner: I want to produce a one man play of Julius Ceaser
Robert: if you play both Brutus and Ceaser, won’t you have to stab yourself in the back?
Shatner: well it won’t be the first time