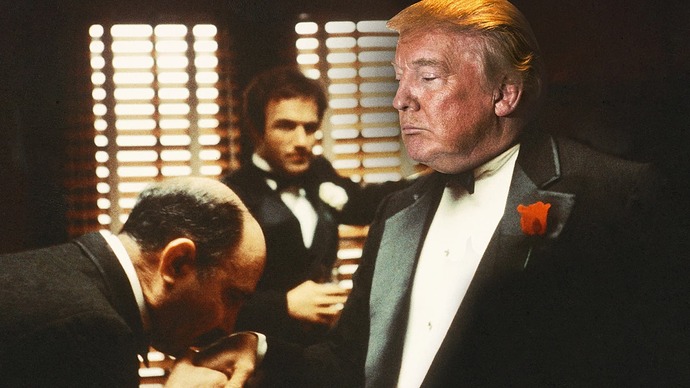 So, if I get what you’re saying, Marge, the Republican party is an organized crime cartel that will sooner or later be torn apart by a brutal internal conflict that leaves most of the leaders dead?

If you say so, I guess. I don’t disagree with the basic description, but that’s a happier outcome than I had dared hope for. From your mouth to God’s ear, as they say.

Is it wrong that I just can’t stop imagining a horrible scenario where all these people accidentally fall into a giant industrial roller crusher machine?

Can we get to the part where she stuffs an orange peel in her mouth?

With McCarthy running the meeting, it’s more like Fredo’s crummy entourage in Vegas telling him how smart he is.

Hon, you have no committee assignments. It’s literally your only meeting.

we meet in Kevin McCarthy’s office, and it’s called the ‘five families,’

So she’s suggesting that she herself is one of the five most powerful, influential people in the GOP even though (as already noted) she doesn’t even have any committee assignments?

Well, we know GOP/GQP members have the second part down pat. Heaven help us if they ever figure out how to maintain the first part for longer than six months.

she doesn’t even have any committee assignments

I don’t think those are necessary for whipping up their voter base by serving up haterade and engaging in media misdirection.

As in observations (here, for instance) that the Party is acting more like an organized crime mob every year. No real policy platform, just gang identity etc.

Bannon, convicted, awaiting sentencing, still allowed to pollute the global discourse with his calls to destroy democracy. He needs an offer he can’t refuse.

the Party is acting more like an organized crime mob every year. No real policy platform, just gang identity etc.

So, them having a platform with actual policies, some of which they have and continue to try to implement is a “confession” of being mobsters… Okay then.

This sounds like bothsider bullshit which ignores things like facts. I would never say that the current democratic party is free from corruption, but to compare them to the current GOP is really the height of absurdity, given what’s going on there.

It strikes me that you’re also calling the authors here at BB “mobsters” since they are the ones calling MTG out for her comment.

And how does that sound like Democrats? Any good quotes you want to pull, or like…examples? From reality? Can’t wait to read them! Thx