I don’t know if it’s a deliberate joke, but the martial art he (ostensibly) practices is called “aikido”, not “akido”.
Also I’d somehow completely missed the news about him being a horrifying sex predator. Though it’s not surprising…

Why am I not surprised that most of the people toadying up to Putin and his friends are ethically and morally bankrupt assholes?

I read this a while back; wasn’t surprised in the slightest.

This lacks the authenticity of the days when Americans who actually accomplished heroic feats instead of portraying them on screen were used as shills by right-wing authoritarian leaders. 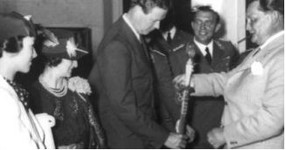 As I mentioned in that other site,

Who’s in that tiny pic?

Lucky Lindy and his buddy Goering.

I propose that Donald Trump and Steven Seagal stage a morality play to help improve East-West relations. Donald will stand in the middle of 5th avenue and pretend to shoot somebody and Steven will swoop in and pretend to stop him. Then, as these two giants of international diplomacy are hugging and swapping notes on sexual assault, a bus comes around the corner and flattens them both. As the sun goes down and the crowds disperse, enter Rudy Giuliani with a mop, tasked with cleaning up the disgusting mess they have made on the public way.

Dark Territory inspired me, as a man

Geez, do Putin and his cronies think that collectively, we’re pretty stupid? Oh, wait…they do.

Anyone has his contact info? I want to see if he will give me one of his katanas when he dies.

Also, how is he not a spokesman for “Just for Men”?

Seagal is an asshole and a creep, but AFAIK, his martial arts skills are real.

I just looked in the Foreign Agents Registration database - you don’t seem to be listed there Mr. Seagal.

Guess who’s a felon. I mean - unless you’ve renounced your US citizenship.