Herschel still denies he paid his ex-girlfriend to get an abortion: "She is lying"

Originally published at: Herschel still denies he paid his ex-girlfriend to get an abortion: "She is lying" | Boing Boing

Concussion-addled or not, he’s learned Trump’s lesson well and is sticking to it – “No matter the evidence, always, ALWAYS deny any wrongdoing.”

As a resident of Georgia, I humbly apologize – even though I had less than zero to do with his rise to political “fame”. There are a few good folks in Georgia, but he is not one of them.

“You’ll go to Hell for lying just like for stealing.” – attributed to probably everyone’s grandmother.

(In CA we vote by mail; still waiting for my ballot which was sent out last Friday.)

*Walker and Kemp aren’t your fault. 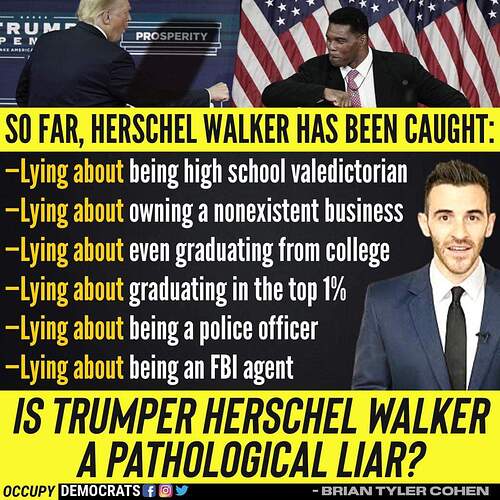 “Herschel Walker admits he now remembers the identity of his ex-girlfriend, who says he paid for her abortion”

Who knows what he’ll remember next week?

So many Republicans saying “I don’t care about that, I just want control of the Senate.” But they don’t realize that THEY aren’t the ones getting control, they’re handing control to guys like Walker and Cruz, who won’t ever ever give a single thought to their welfare.

“Who you gonna believe, me, or your lying eyes?” ~ Groucho Marx

You know what they say: A broken promise is a lot like a child’s pinwheel. You have to be yourself, or at least within the confines.

That’s a feature, not a bug

I think you single-handedly need to change how Georgia votes.

(Not serious. I occasionally have to make excuses for internal politics in Washington State.)

There are a few good folks in Georgia, but he is not one of them. 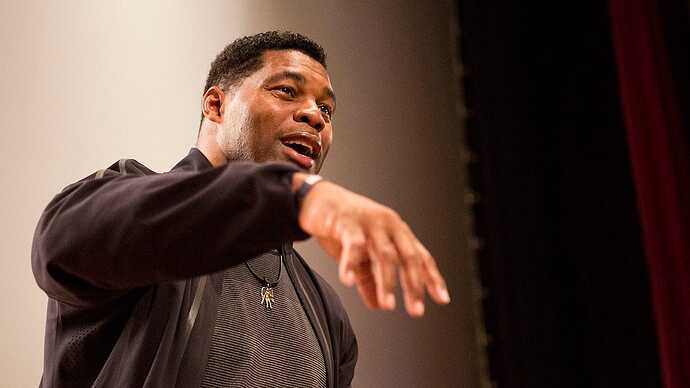 Under the U.S. Constitution, Herschel Walker can live in Texas while campaigning but must officially move to Georgia by election time.

“She is lying” yet this moron probably wrote “For abortion YearXX” in the memo of the check he signed and gave to her to pay for it.

I was very disappointed that the interviewer didn’t follow up with that. She should have asked, “So you’re saying that she is lying even though you, yourself, have lied about your education and law enforcement experience among the many other lies that you’ve told?” (Immediately followed with a “Hmm.”)

Indeed, but of course, corporate “journalists” are just stenographers now. They rarely press for the truth on anything, especially something “controversial” like the lies some candidate or politician is spouting.

ABC’s Linsey Davis: “Did you ever have a conversation with this woman … about an abortion?”

Herschel Walker: “No.” (It wasn’t a conversation. I just told her to get one.)

Davis: “Did you ever, to your knowledge, give money to pay for the cost of an abortion?”