How to deal with douchebag parking

I thought of that on the day, but if memory serves we had gone a few days without snow.

be careful riding herd on people parking in Handicapped spaces. Just because they aren’t using a wheelchair or crutches doesn’t preclude them having some other ailment that necessitates closer, IE handicapped parking. Many and vast are the ways our bodies can betray and fail us.

Its a bit geeky, but it depends on the “alignment” of the person. To wit:

Neutral Evil: He’s just careless and inconsiderate. He didn’t think about anything else other that parking and getting in one of the buildings to do his business. He could care less.

Lawful Evil: He thought about that kind of a park job, but would rather park with his illegal handicapped permit nearer to the doors.

Chaotic Evil: That is a good park job for him. He usually screeches into two spaces diagonally, flips off any passerby and goes inside. If you are standing by his car to bitch at him later, he will try to punch or even kill you.

Neutral Good: He clucks at the lack of driving etiquette he either goes on his way and parks somewhere else, of if he’s having that kind of day parks like the guy in the truck.

Lawful Good: He parks nearby and immediately calls the cops on the parker, though the cops have better things to do and tell him so. Nothing really happens except the asshole tears up a $50 ticket.

Chaotic Good: He parks next to the guys door, calls another buddy who is always up to sticking it to an asshole to park next to the door on the other side. Just for good measure the guy knifes a tire. After his business, both guys watch the moron come out and deal with it later, usually over a beer at the window seats of the bar across the street. If the guy comes back and starts keying on the trucks, its on and a great fight will occur.

That last text is an error. You’d think it would show the post to you in order to correct it. Oh well.

How about a Motorcycle parked in the curb spot earlier?

A slightly less passive-aggressive way of dealing with it: 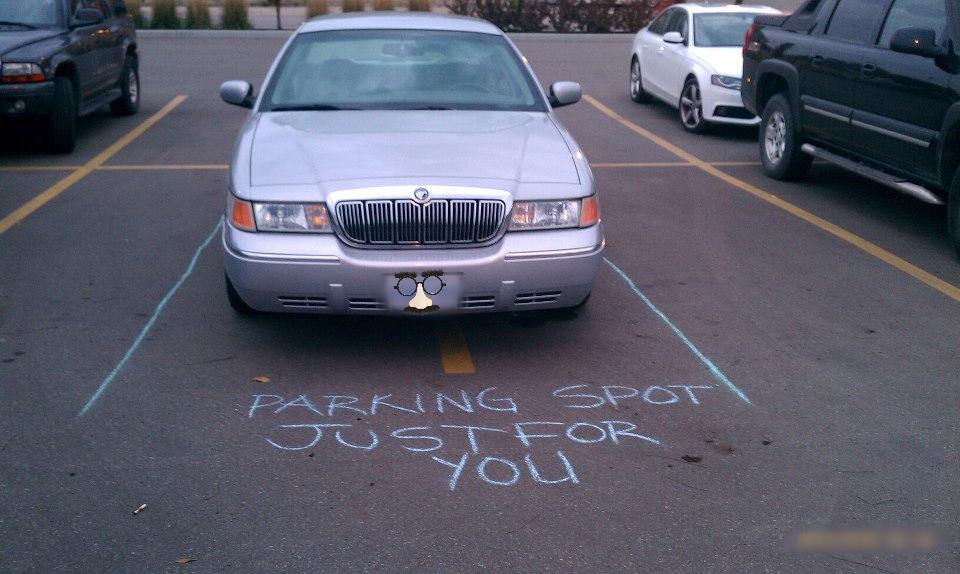 It’s funny because lady parts are particularly yucky and need to be washed in a special way!

Another factor that doesn’t appear to be in play here but happens a lot in snowy places is when the parking lines are obliterated by snow and people take a guess at where the spaces are. Then the snow melts and it looks like they were being a grotesque cleaning apparatus for a part of ladies’ anatomy.

I just want a solution for the douches with the monster sub woofers and stereo systems. They can’t hear you if you yell at them, and it’s still illegal to shoot them…
what is left to us?

Someone needs to invent a hand held focused EMP generator.

It really pisses me off when people do this at my school parking deck… there is literally only so many parking spots in those decks and once they are full, you have to go to the other lots that are not as convenient (not that these are particularly convenient, but better than the other lots)… Also, sometimes people park in places that aren’t spots at the end of rows–once I was at the top of the row, and some guy had pulled in between me and pillar at the end. I almost couldn’t get in, but managed it somehow. I ended up leaving the person a note saying how uncool it was… I’m sure they cared. I can’t remember, but it seems they had some douchey sticker on their car… john galt maybe?

Yeah - portability probs. I’m sure there’s away…just haven’t found it yet. Thing that royally gripes me, is that the volume inside is nowhere near what the rest of us are getting hit with. It’s there specifically to annoy others.

Only idea I’ve ever had, is a programmable LED display, so you can get in front of them and tell them off. May be satisfying - but still doesn’t solve the actual problem.

Yup. One of my first post-college vehicles was an old Chevy van, “only wrecked badly once”, which had a big rusty gash all along the passenger side. Amazing how close you can park to another car without hitting it, and if you had to get out the back you could. It was also useful for driving in snow (heavy, and nothing I could do to it would make it any uglier), and the New Jersey right-of-way rule for merging onto highways or in traffic circles was that the uglier car wins.

If somebody wants to park their car across two spaces so nobody’s next to it, and they park out at the edge of a big parking lot, I’ve got no problem with that (except malls at Christmas.) But no, the person who does that where I work gets in early and takes up two spaces near the building (but not early enough to take the 1 1/2 space at the end that’s an artifact of diagonal parking.)

It all adds up to a funky situation.

I vote that going out of one’s way to “punish” a douchbag makes you equal parts douche. Just find a different parking spot?

Speaking as a guy who at age 41 finally eeked out enough money to buy his first new car (just a simple Kia, not anything fancy) and has had not one but THREE big door dings in 60 days from careless dolts who bust open, or let their kids fling open, giant doors in parking lots, I get this guy.

Given the wet ground and salt spray all over, maybe they were parking when snow covered the lines?