Is he trying to flush twitter and his money? Wish I had more motivation to create a competitor

I suspect the end of the FAFO will be discovering that he is not only out 45 billion, but also has caused many of his other assets to drop precipitously in value. If we are lucky, it will be quite a roller coaster from “richest man” to former millionaire ever seen.

SpaceX will end up either in the hands of Boeing or Jeff Bezos.

Tesla’s remaining assets will be bought up by either GM or Stellantis, or maybe even VAG.

StarLink will end up in a bidding war between ESA and NASA.

Other companies like the Boring Company will simply fold.

Hey, a guy can dream!

Some of that might get the Feds involved, since 45 (and others) used it as a public platform of record.
And we all know, if The Librarians get involved, shits gonna get real.

After losing some people’s billions - he better do research in bone saw resistance.

In order to give up more of my personal life for my employer, I would have to respect the employer and it’s mission, respect my management and be compensated accordingly. Looks like Twitter accomplishes none of these.

Presented, for your consideration: a toxic narcissist who can do and say whatever he wants on Twitter—because he’s the only one left on Twitter.

He might lose control of Tesla (it probably doesn’t have a future with all the big car companies getting into electrics, anyways), but SpaceX doesn’t seem at risk. It’s his only company that’s actually solid, too - though that seems to be because Musk has been very hands-off. If he loses everything else, he might not be able to help himself, and then there’ll be trouble…

Tesla’s remaining assets will be bought up by either GM or Stellantis, or maybe even VAG.

The Bonesaw clan will also be taking a chunk of it as part of the collateral Musk put up. Where the shares end up is another question, but whatever happens he likely will lose control of the company.

On the contrary, I am enjoying the constant stream of jokes that aren’t necessarily jokes. 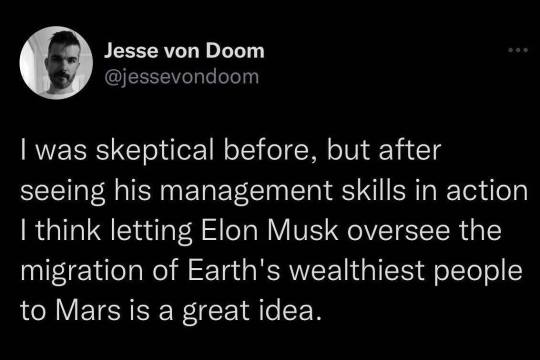 The b-ark didn’t work out so well the last time that happened.

It did the job that it was supposed to do.

[Reaslises he needs these employees]

[Reaslises he needs these employees]

Sources: Elon Musk softens his remote work stance and is trying to convince staffers to stay, as more than anticipated opt to leave ahead of his 5pm ET deadline

On the contrary, I am enjoying the constant stream of jokes that aren’t necessarily jokes.

All jokes are necessary, some are even “critical” or “load bearing”.

Forget Mars, I’d be fine with just sending them to the bottom of the ocean Bioshock style. Musk already seems to know the lines to play the part of the arrogant, out of touch billionaire responsible for dooming a large number of people.

Transported into an endlessly looping video: He in an out-of-control Tesla, ablaze and smashing into a brick wall over, and over, and over…