Ivana Trump has died at age 73

Seems like she died alone. I wonder if her kids were in touch with her at all

It sounds like that side of the family is pretty solid

But in recent years, Ivana Trump had been on good terms with her former husband. She wrote in a 2017 book that they spoke about once a week.

The Marla/Tiffany side is treated as an asterisk

With her death, Ivana has finally exited her obligations under the NDA.

Now do the other Trumps!

Wait a minute there now.

And the Donald hits yet another level of sub-basements. He is using his “statement” on her death to send out a fund-raising e-mail. He will take the coins off her eyes.
eta: forgot this 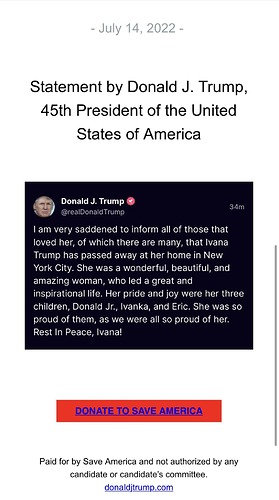 He is using his “statement” on her death to send out a fund-raising e-mail. He will take the coins off her eyes.

What also jumped out at me was, “her three children.”

“She was so proud” of her kids. Yikes! They’re going to need more hugs from strangers.

For Donald, that’s a surprisingly tactful and gracious statement (if you discount the fundraising button).

Do you think he had help writing it?

What also jumped out at me was, “her three children.”

He did the same thing with Barron a while back, noting that his current wife Melania has a son (as in “she has a son,” not “we have a son”).

I doubt that he has even read it.

Him, read? Slow down there, Poindexter.

A pity about the former Mrs. T. She and her successors were punch lines when the biggest clown was always on their arm.

Do you think he had help writing it?

No misspellings.
No manic use of capitalization.
No bad grammar.
No ridiculous segue into hate-land

He didn’t write it.

Wow. This happens the day before the orange menace and his kids were being forced to testify in the NY attorney general’s civil case? That’s a weird coincidence.

I have had a lot going on this week and I have not been tracking the Jan6 investigation news–was Ms. Trump slated to get deposed this week? Like tomorrow? I am sorry for my ignorance. Did I hallucinate hearing this earlier? (It’s really hot here and I’ve been working outside all week and the heat makes me stupid.) 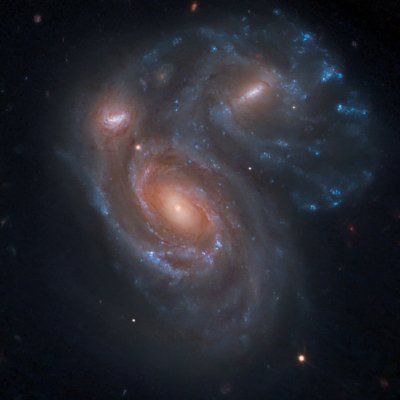 @drskyskull
I will mostly remember her for warning us, years before Donald ran for office, that he kept a book of Hitler’s speeches by his bedside. twitter.com/ABC/status/154…

Coming up next on Fox News: it was Hunter Biden with his laptop in the Conservatory.

I’m genuinely hoping the old adage about elder couples dying soon after one another holds true.