"FBI has confirmed receipt of the letter mentioned by Feinstein, saying it has been added to “Judge Kavanaugh’s background file, as per the standard process.”

This is tied to his “gambling” debt, that whole thing was a laundered payment to a woman he raped/impregnated/forced to get an abortion back in high school.

Debra Katz is one of the country’s top employment and whistleblower attorneys. There is fire behind this smoke.

Feinstein throwing bombs without having the honesty to provide corroborating evidence.

Unless the sexual misconduct involves “a live boy or a dead girl,” I don’t really expect the GOP to give a damn.

Huh? She did exactly the right thing here. Let’s suppose there’s nothing here but instead it was a trap set by the right, she leaks the report to the press and boom Conservatives go batshit about lefties leaking to the news.

Sending the report to the FBI and not releasing the specifics was the moral and just thing to do. Something Team Red hasn’t done maybe ever.

Feinstein throwing bombs without having the honesty to provide corroborating evidence.

WTF are you talking about? You are calling Feinstein a Nazi because she didn’t out a sexual victim that asked for privacy when we all know the second her name is released that the MAGA heads will start sending her death and rape threats.

Um, where did I call Feinstein a Nazi.
Team Red has the Nazis.
Team Blue has hacky politicians like DF who pull crap like this – press releasing something on which they are unwilling to publicly disclose the substantive details.

So DF is a hero to you because she press released an item for which she is unwilling to publicly disclose the substantive details? Oookay then.

You’re right. This makes no difference at all.

This is tied to his “gambling” debt, that whole thing was a laundered payment to a woman he raped/impregnated/forced to get an abortion back in high school.

And unsubstantiated speculation like this is why DF’s press release was scummy behavior, the type of thing that, if done by the Repubs, you would be seething at.

This makes no difference at all.

I didn’t say that. I said that “I don’t expect the GOP to care.”

I’m a realist; not a defeatist.

There are no guarantees in life, for good or ill; sometimes the seemingly smallest factors under just the right circumstances can cause an avalanche of change.

Hardly the first red flag on Kava, won’t be the last either. Bet on it. 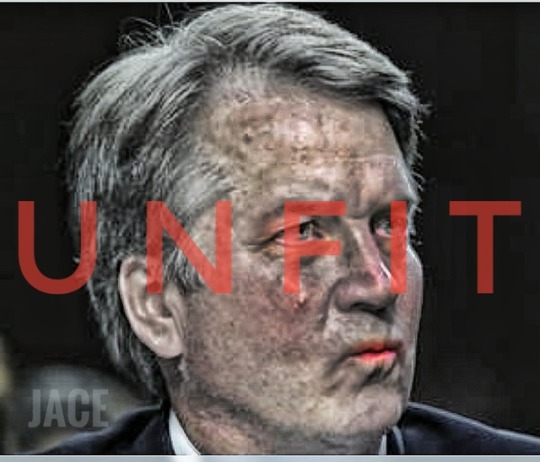 This appears to be an accurate copy of the press release (found on Twitter): 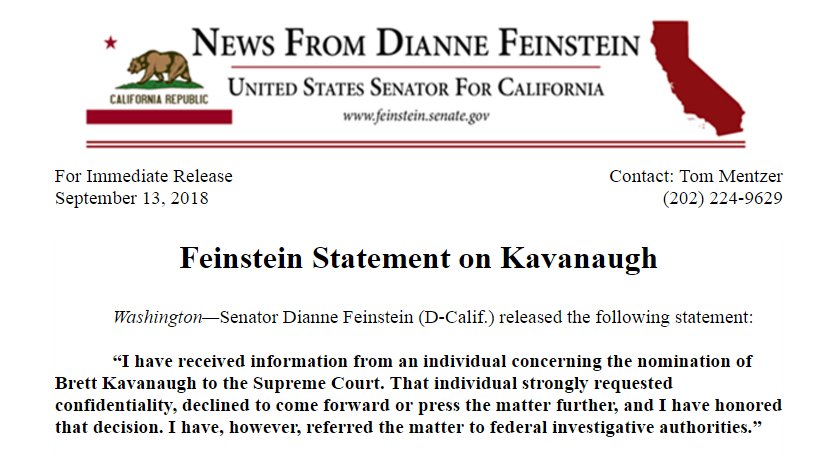 How is such grandstanding a good thing to encourage? If you have the evidence, put it out there. You can redact any personally identifying information to protect the alleged victim.

She did put it out there. To professional investigators to see if it’s legit.

If you feel the need to defend Kava-naughty, please fill out the attached report and submit in triplicate.

Okay, but the Times story also says DF was made aware of this information during the summer. So why did she wait until Wednesday to share it with the FBI? This is a weird story.

false equivalency is fucking FALSE. Get the fuck out with that tired and completely wrong argument.

I agree. Referring it to the FBI without disclosing anything substantive is the classic Dem hedging tactic. Not wanting to stick their necks out too far to be accountable and waiting for the system to self-correct. Meanwhile, Mitch McConnel gets a second SCOTUS seat that he didn’t even have to steal this time.