Shades of Kristallnacht. Over the wearing of a MASK.

Discovered they’d closed the Coldwater location yesterday (I’m a block away). I’d planned to go support them after hearing the issues they’d had at the Atwater location, only to find this: 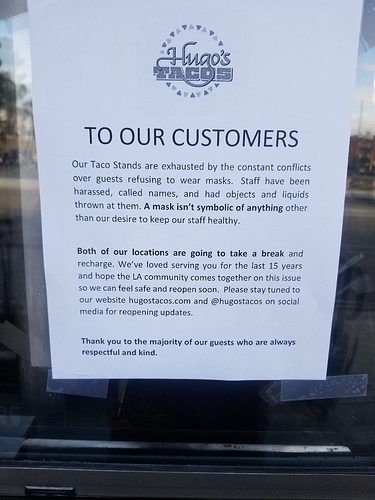 " If you want a vision of the future, imagine a mask hanging on a human face – forever." – Fox News host George Orwell

I don’t understand why these restaurants have to close. The burden shouldn’t be on them. If a business is being harassed when they are attempting to enforce a state mandate, protect their employees, and protect their customers, they shouldn’t have to close or take action on their own (e.g., hire security guards). Would it be an unreasonable request to have a police officer on site during business hours? Isn’t throwing things on people considered assault?

Really disgusting these honest hard working folks had to shut down because of irresponsible adult-babies throwing tantrums. All i can hope is that this will have a positive effect of sensible people giving them additional support.

“It’s really sad to see grown up people doing childish things like that.”

I would be mortified if one of my CHILDREN did something like that.

I don’t understand why these restaurants have to close. The burden shouldn’t be on them. If a business is being harassed when they are attempting to enforce a state mandate, protect their employees, and protect their customers, they shouldn’t have to close or take action on their own (e.g., hire security guards). Would it be an unreasonable request to have a police officer on site during business hours? Isn’t throwing things on people considered assault?

In a sane world, everything you said would make perfect sense.
Personally, I think managers in the service industry should be allowed to carry pepper spray and be trained to use it when people start physically harassing them or employees. It’s one thing to have a tantrum (which is bad enough), but it’s a whole different level when folks start getting shit thrown at them.

Would it be an unreasonable request to have a police officer on site during business hours?

I go to the one in Sherman Oaks when I’m in town. These Know-Nothing bigots better not close them down permanently.

Pull the tapes (if they have them) and charge them with assault. LAW AND ORDER

Let me draw a rough parallel. If I’m sexually harassed at work and I quit my job to avoid the situation, it only serves to reinforce and enable the corporate structure in which the harassment took place. The only way to change the status quo is to hold my ground as an employee, call attention to the harassment, and go through the proper channels to bring the offending parties to justice. If those channels don’t exist, then action needs to be taken to put them in place. In the situation that these restaurants face, shutting down only serves the people who are being assholes. I don’t want people to be unsafe while getting their (amazingly delicious) tacos, but I don’t think that this is the way to solve the problem. I’m not sure what it, but this seems completely backwards to me.

No, you are correct in your assessment. I think the owners were likely NOT expecting to get the necessary support or literally did not get it when calling about the assaults. And that’s what this is.
I hope they are able to open up soon with the support they need.
But like I noted above, I think the managers of these places are within their rights to defend themselves and their employees and if an altercation turns physical, they should blast the people in the face with pepper spray.

I’m not surprised by this, given the “MAGA” overlap of racism and refusing to wear masks. Taco stands get the worst of it as a result.

Would it be an unreasonable request to have a police officer on site during business hours?

The police would probably think so, but you’d not want them anyways. I just saw some picture of a restaurant with a large “masks required” sign on the front window and inside, about half-a-dozen customers lined up - law enforcement officers not wearing masks.

Problem with pepper spray is that anyone in the vicinity will get blasted too. It’s not uncommon for the person using the spray to get hit with blowback of the spray, and if there’s employees or customers nearby they could potentially be affected too. One also has to hope that no one is allergic to the pepper compound or doesn’t have asthma or underlying health issues. Not saying one should never use pepper sprays, it works and its better than a physical altercation but one has to use it with full knowledge that the end result won’t be neat/perfect.

All i can hope for is that when this business comes back they’ll have something in place to ensure the safety of workers from assholes. Sad that has to be the case but i will hope for the best for them and other businesses that have also been harassed for refusing service.

Also, I can’t imagine that pepper spray is great around food. I’m all for spicy tacos, but I usually prefer chili peppers and not pepper spray.

Personally, I think managers in the service industry should be allowed to carry pepper spraypermanent colour dye spray

A single standard colour needs to be selected and used by all, so anyone appearing in public with this colour on their skin gets treated like the pariah they are.

also, the fact that that would only be necessitated because selfish conservative assholes refuse to listen to medical experts and quarantine, and wear masks, thus extending “wave one” into an ever extending plateau (your particular graphic topology may differ - usually depending on the political landscape).

My local White Castle has had some useful innovations for years:

But really, the only way for them to be safe is if the MAGA mutants go the hell home. Better defenses might be taken as a challenge by these mutant MAGAs. (I’m not sure which of the two epithets is better. What do you think?)