MAGA "mob" gathers outside Trump Tower before announcement, and it's all so sad (video)

Welcome to the Hotel Mar-A-Lago.

While I have sympathy for those who were damaged growing up under a Strict Father parenting model, it reaches a limit with those who gleefully act out their right-wing views in public.

This might be part of the damage you mention, I’m no psych expert; but in this case it seems like there’s not really a viable path to both cling to abusive Trump-daddy and not act out in public:

It’s obviously the case that a lot of ‘strict fathers’ are just abusive assholes; but the noble theory is that the strict father both rewards and punishes as part of producing self-reliant and self-disciplined children.

Since Trump hasn’t…exactly…‘rewarded’(outside a very narrow circle of nepotism cronies and plutocrat-tier tax cuts) except in the sense of ‘owning the libs’; and evidently knows so little of self-reliance or self-discipline that he’d be hard pressed to instill it even by accident the only way he can be plausibly interpreted as some sort of disciplinarian, rather than just an indulgent man-child who frankly isn’t that competent, is if you specifically focus on his punishment of assorted outgroups and treat that, along with some more or less empty flattery, as the evidence of his efficacy as punisher and his efficacy as rewarder of people who dislike the same outgroups.

Without the public indulgence of their id; there’s really no ‘reward’ half; and the ‘punishment’ half is not terribly dissimilar from what they’d get from more or less any of the much less colorful republicans who would also continue working to unfetter the very highest tax brackets and mostly ignore the little people except for the obligatory campaign trail diner stop.

Where they still have segregated bathrooms, no doubt.

This might be part of the damage you mention, I’m no psych expert; but in this case it seems like there’s not really a viable path to both cling to abusive Trump-daddy and not act out in public

I get what you’re saying, especially in regard to a Strict Father figure who’s also a grifter. Still, these are grown men with life options who’ve made a choice.

I can’t make myself listen to that guy, but just even based on the stuff in this fact-checking coverage, it seems really boring. Other than gas prices, the topics just seem very out of touch with what your average voter would care about. 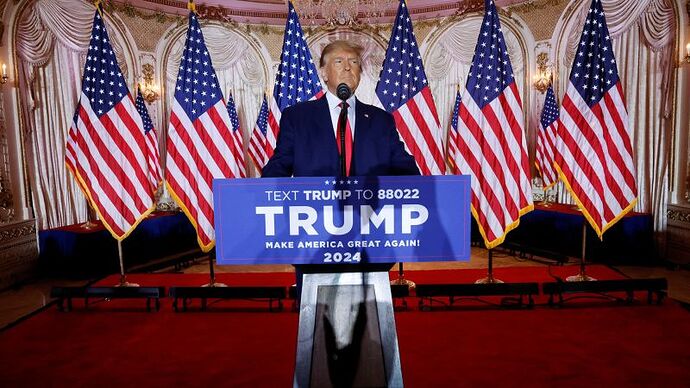 Former President Donald Trump began his 2024 presidential campaign just as he ended his presidency in 2021: with a whole lot of inaccuracy.

That’s probably a bit much to ask of the Dem establishment, though.

“We have been clear with Donald. There have been conversations between them during which Rupert made it clear to Donald that we cannot back another run for the White House,” a senior News Corp source told the i newspaper. Worse than that, I have read that Murdoch has said that if Trump runs again, he and his papers will back the Democrat candidate. It’s right at the end of this article…

If it happens, Murdoch won’t give that endorsement to the Dems for free. There’s always a quid pro quo with that lich, so the question will be whether or not the Dem pays the price.

You can’t trust the Rupe. He’ll pivot any time when it suits his interests.

Sure. That’s a given.

But I’m also fairly confident Rupe has long since done the calculations and figures another Trump presidency will be worse for his interests than any other alternative.

What late-stage capitalist exploiters value above all else is stability and predictability.

As English conservative politician Chris Patten put it “the thing about Rupert is that if you need him, he isn’t there”.
Just like Tory Blair’s “new” Labour Party, which was winning anyway but handed him whatever he wanted until he shafted them for a clown car of evil idiots. He deserves nothing. Get into power not beholden to him in your once in a generation opportunity, then break out the antitrust enforcement and make him the head of one small company in a diverse media environment.

Then you can really start fixing the world.

ETA
He said that decades ago when Murdoch was dumping his party for Labour. Not recently when he sued him over his memoirs.

He’ll pivot any time when it suits his interests.

No different than the rest:

National Review has greeted Trump’s candidacy with another of its patented editorials rejecting his candidacy. A number of anti-Trump commentators have greeted this position as a welcome change, given the magazine’s history of either defending Trump or running interference on his behalf.

But the editorial simply articulates the same position the magazine has held all along. NR wants somebody other than Trump to lead the Republican party. But if Trump is leading the Republican party, they will fall in line. The latter part is perfectly obvious if you read all the way to the third-to-last paragraph:

" Needless to say, Trump is a magnetic political figure who has managed to bond countless millions of Republicans to him. Many GOP voters appreciate his combativeness and hate his enemies, who so often engaged in excesses in pursuit of him. Once he won the nomination in 2016, they understandably voted for him in 2016 and 2020, given the alternatives. But the primaries won’t present a choice between Trump and progressives with calamitous priorities for the nation, but other Republicans who aren’t, in contrast to him, monumentally selfish or morally and electorally compromised. (And it should be added, won’t be 78 years old if elected and ineligible to serve two terms.)"

They think Trump’s lack of discipline undermined his goals. But if Trump does manage to secure the nomination, NR and the conservative party mainstream will once again discover that the horrors of the Democratic party outweigh whatever small misgivings they have with Trump. Disdaining Trump as a probable loser is a very far cry from not wanting him to win. via the intelligencer

The depth of knowledge of gay culture required to drop that particular phrase is sort of… surprising given who’s delivering it.

I just love that genteel tippy tapping on the desantis flag. Such delicate stomping. They probably wanna keep it in good shape if they need to fly it later.

He got terrible ratings. This show will be canceled after the pilot.

RDS has a flag now

I believe he does.

It’s a turd balanced precariously upon a melon against a sky-blue background.

It’s not my favorite flag, TBF.

Welcome to the Hotel Mar-A-Lago.

You don’t wanna go…
It’s a bit fat no…
Plenty of room empty seats at the… etc, ad infinitum.

calamitous priorities for the nation