Fixed the headline for you to bring it in line with what the video evidence shows.

I had a “holy crap” moment like that last week, when I drove up to a vehicular accident that had just occurred, with a minivan sideways across both lanes.

It makes you wonder if Death rolls natural 20s with dungeon dice?

I’ve had that happen. One car off in the median and the other on its roof, wheels still spinning. Pretty harrowing stuff.

I also had lightning strike about 20 feet in front of me.

It makes you wonder if Death rolls natural 20s with dungeon dice?

I’m either very lucky or long overdue for some sort of calamity.

Fixed the headline for you to bring it in line with what the video evidence shows.

What a joyful life you must lead.

I’m either very lucky or long overdue for some sort of calamity.

If the Final Destination movies have taught me anything, it’s…

So what caused the explosion (actually, since nothing got more than rattled, it looks more like a large smoky burst)? 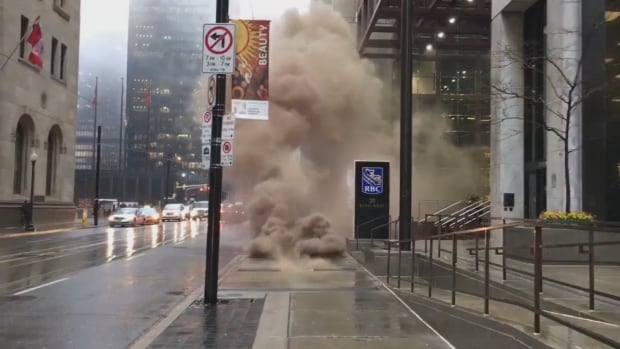 Explosion from hydro vault fills the heart of Toronto's business district with...

Toronto Hydro found rainwater had leaked into the hydro vault that exploded beneath the heart of the city's business district as thousands of employees were heading home for the day.

Sometimes you get incredibly lucky.

One morning in probably 1999 I left a bit late for work, since I had just gotten permanent plates for my new Jeep and wanted to put them on. I ended up behind a drunk driver with state rep plates, who was kind of all over the place. I gave her the benefit of the doubt, since it was 9:30 am, and hey, state rep… Maybe they’re stupidly fishing around for something they dropped on the floor?

Eventually, she crossed the center line and plowed head on into a 1 ton pickup full of landscaping equipment. The truck’s left front wheel tore off, went just in front of me, he skidded around me, I jerked my wheel into a too-perfectly placed driveway, before the tree where our state rep ended up. Not a scratch on the new car.

Then I just sat on the side of the road and fed the poor landscaping guy cigarette after cigarette until the cops and firefighters got there to cut the lady out of her car. She apparently had a history of such things.

I’ve seen a bunch of crashes happen right in front of me, but nothing nearly that close before or since. Maybe I project a Chaos Field 1/4 mile ahead of my position at all times?

Can we change it to “alleged man” to be safe? I mean, how do we know for sure?

I think i just shat myself for that guy

And there’s so much you could do if it was Armstrong.

You know, I wouldn’t be the least bit surprised if Bruce Willis, Harrison Ford, or Nicholas Cage were involved.

In the last 1980s I worked in Philadelphia and usually walked to and from the office through center city neighborhoods. One day walking home I heard a screech and a bang right behind me. I turned around in time to see a car careening towards the crowded sidewalk. Others that had turned were scattering, leaving one women who hesitated as to which way to run. The car struck a concrete filled steel pipe near the curb which ostensibly was there to stop cars from coming up on the sidewalk. The pipe launched the car in the air spinning it onto its side. I saw the women tossed into the air, but she disappeared behind the sliding car. It came to a stop nose against the steps of a rowhouse not five feet away on the sidewalk I just crossed. That all happened in an instant.

Epilog - the driver climbed out the car to a crowd that was ready to lynch him. It was unclear if he had run the red light, or was struck by somebody that ran a red light. His car was hit in the rear quarter which angled it towards the sidewalk, and the airbag had gone off stunning him and blocking the windsheild. He had no idea he had hit anybody. The women was alive and had landed between the car and the rowhouse. The ambulance arrived quickly, but I never learned any more about what happened to her. I left because there was a crowd forming and more gawking was not needed.

What the heck is a “hydro vault?” That’s not a term I’ve encountered before.

a history of such things

i asked myself the same.

What the heck is a “hydro vault?”

In Canada (or, at least, in Ontario), “hydro” generally means “electricity.” Never mind that most of our electricity is not generated through hydroelectric dams; about 30% is (again, for Ontario). I suspect the term caught on in a time where such dams (especially Niagara Falls) generated a much higher percentage of the total.

Anyway, for that reason, a hydro vault is an electrical transformer station.