I would like to not think that this act of political violence that occurred on the day Elon took over Twitter was a sign, but well, it probably is.

I would just like to say : Get Well Soon.
I look after my dad, who is the exact same age, and I cannot imagine the trauma he went through.

Indeed, old folk can be so frail and birdlike. All the best, Mr Pelosi and family.

Dollars to donuts this will be considered an acceptable political interaction by the right. The republicans will see the assailant as the victim because the press doesn’t see this as a reasonable political conversation.

ETA: /s just in case anyone was confused

They’ve fully embraced stochastic terrorism as a means to an end. Unfortunately, this brutal won’t be the last or most awful example we’ll see in the coming years.

The republicans will see the assailant as the victim because the press doesn’t see this as a reasonable political conversation.

They’re already victim-blaming Pelosi for not locking his door and trying to baselessly pin the assailant’s actions on “mental illness”.

Yeah, when I read he was attacked with a hammer, I thought, “Oh shit, they’re actually downplaying the seriousness of his injuries.” These are the kinds of injuries that, at that age, you probably never fully recover from, even assuming there aren’t future complications, which are likely.

They’re putting a brave face on things; but these are very serious injuries. He must be in terrible pain & recovery will be difficult. 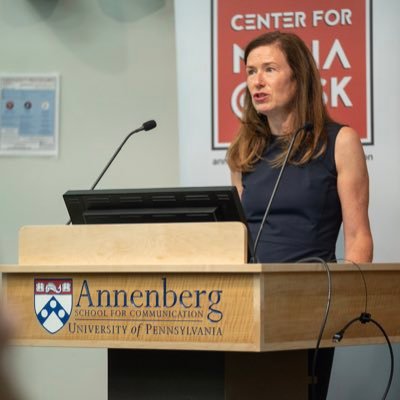 @Amy_Siskind
A preview of what Twitter will become: an attentions starved Elon Musk spreading disinformation on his own platform. Find other options folks. This platform is dying and will not last long. https://t.co/Tc1hZjUUWd 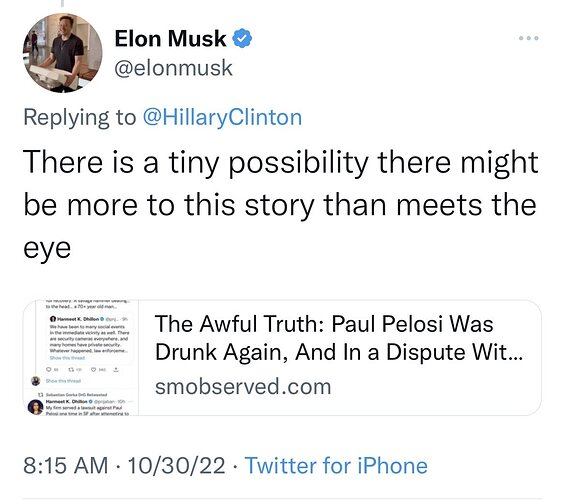 It’s funny you should mention that, I saw on reddit this is nothing more than a customer who didn’t want to pay a prostitute for services rendered. They say you can clearly hear the truth in the the 911 call.

They must have the secret decoder ring for 911 calls.

Also, the fact that they refuse to release the video from inside the house confirms this is nothing more than the democrats rigging the election.

You won’t find that in the fake media, you have to do your own research. 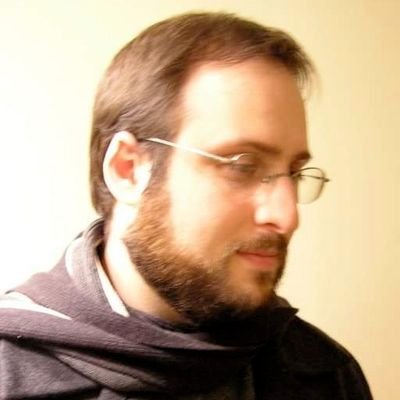 @SethAbramson
I’ve diagnosed the problem. @ElonMusk is what academics call “digitally illiterate.” Clinton posted a Los Angeles Times article, and Musk replied with *a post from a fake-news site* that’s already down. Then he wrote “tiny possibility” as a hedge against spreading disinformation. https://t.co/XuP13qV08b 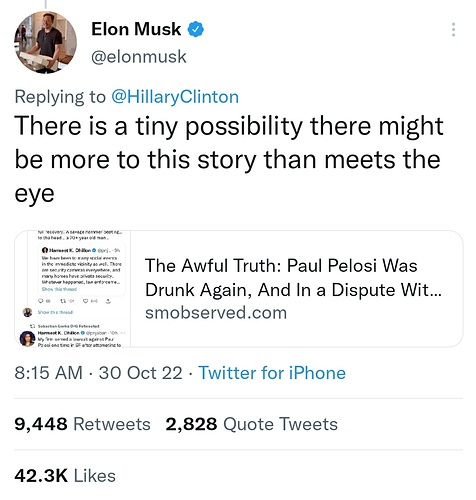 @SethAbramson
Is it a dangerous situation when the Twitter CEO is digitally illiterate? When he indulges conspiracy theories because—as an egomaniacal billionaire—he wants to think he knows better than everyone else? And because no one can lecture him on anything? Yes. google.com/amp/s/www.inde…

@SethAbramson
This won’t necessarily have an impact on Twitter moderation—which hasn’t ever banned conspiracy theories. The bigger issue is that it underscores the emotional immaturity of @ElonMusk; he is, as a matter of moral development, a child. A child with hundreds of billions of dollars.
8 Likes
edgore October 30, 2022, 2:39pm #18

I think this is way off. Elon might be a moron, but he understands exactly what he is doing here. He thinks it’s very clever and hilarious to spread this kind of garbage. His he has an audience of millions that loves this shit and he is feeding that demand very effectively

Either way, he’s an immature arsehole.

Oh for sure. But, I think for his purposes, an extremely digitally literate one (just his purposes are evil)

What’s being discussed in terms of a Twitter CEO’s digital illiteracy is that on Thursday he begs advertisers to stay with the platform by promising he won’t turn it into a “free-for-all” cesspool for tr0lls and then on Saturday personally dives in with a tr0llish post. That 48-hr turnaround may please the edgelord billionaire’s fanbois but it’s not going to impress the advertisers (some of whom have already left) and probably not his creditors. Keeping those evil and childish purposes rolling requires cash that even he alone doesn’t have.

That is business literacy…which we already know he does not have - he bought Twitter!

ETA: I honestly think that one of the long-time problems with Twitter is that the people running it didn’t use it the same way that it’s users used it and were extremely digitally illiterate regarding Twitter. Elon on the other hand is extremely good at Twitter. All of which is my circular way of getting back to Twitter is bad, bad people are good at it, and it should not exist

It’s as if Kibo were running the place. Except Kibo was very transparently goofing on people.