And this 1956 CBC cooking show that shows how to make pizza can’t be missed. All you need is a sliced hamburger bun topped with pickles and relishes — Yum!

In the 1970’s my mother had her version of pizza she made with a Bisquick crust.

It was some time before I understood that pizza could be something that was actually good.

Too be fair, when I was a kid living out in the sticks, pizza needed to be feared. Pizza looked like this: 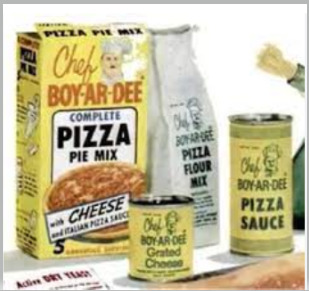 I find it weird that I am only learning now that my folks, born in the late 1930s, likely never had pizza as a kid. And for them I wonder if it still has that sort of long tail of novelty that things like sushi and mobile phones – things I once did not know I needed – have for me.

I had a similar experience when I discovered tacos in the 1970s. Growing up in rural/suburban Minnesota, where the only exposure to food outside the home was found in Lutheran church basements, I’d never seen or heard of them before.

One day after school I saw tacos in a menu at a new diner, so I ordered one just to see what it was, and it was like the greatest food ever.

It was wonderful on so many levels. It was a first for me to find food independently of my parents taking me somewhere. And it was so delicious, with different spices and flavors that I’d never had before. And the thought that the whole world was full of exotic delicious foods was mind opening. It was almost as powerful as my first trip to India, many years later.

It seems strange that something as simple as a taco could trigger so much, but it really was the moment where I started thinking about cultures other than the only one I knew.

Maybe the same thing was happening to people in the 1950s with pizza.

“Lud wishes to know,” Whike relays at last, “Mr. Emerson’s Cousin’s Views, upon the Structure of the World.”
“A Spheroid, the last I heard of it, Sir.”
“Ahr Ahr ahr, ’ahr ahhrr!”
“ ’And I say, ’tis Flat,’” the Jesuit smoothly translates. “Why of course, Sir, flat as you like, flat as a Funnel-Cake, flat as a Pizza, for all that,— ”
“Apologies, Sir,—” Whike all Unctuosity, “the foreign Word again, was . . . ?”
“The apology is mine,— Pizza being a Delicacy of Cheese, Bread, and Fish ubiquitous in the region ’round Mount Vesuvius. . . . In my Distraction, I have reach’d for the Word as the over-wrought Child for its Doll.”
“You are from Italy, then, sir?” inquires Ma.
“In my Youth I pass’d some profitable months there, Madam.”
“Do you recall by chance how it is they cook this ‘Pizza’? My Lads and Lasses grow weary of the same Daily Gruel and Haggis, so a Mother is ever upon the Lurk for any new Receipt.”
“Why, of course. If there be a risen Loaf about . . . ?”
Mrs. Brain reaches ’neath the Bar and comes up with a Brown Batch-Loaf, rising since Morning, which she presents to “Cousin Ambrose,” who begins to punch it out flat upon the Counter-Top. Lud, fascinated, offers to assault the Dough himself, quickly slapping it into a very thin Disk of remarkable Circularity.
“Excellent, Sir,” Maire beams, “I don’t suppose anyone has a Tomato?”
“A what?”
“Saw one at Darlington Fair, once,” nods Mr.”“Brain.
“No good, in that case,— eaten by now.”
“The one I saw, they might not have wanted to eat . . . ?”
Dixon, rummaging in his Surveyor’s Kit, has come up with the Bottle of Ketjap, that he now takes with him ev’rywhere. “This do?”
“That was a Torpedo, Husband.”
“That Elecktrickal Fish? Oh . . . then this thing he’s making isn’t elecktrical?”
“Tho’ there ought to be Fish, such as those styl’d by the Neopolitans, Cicinielli. . . .”
“Will Anchovy do?” Mrs. Brain indicates a Cask of West Channel ’Chovies from Devon, pickl’d in Brine.
“Capital. And Cheese?”
“That would be what’s left of the Stilton, from the Ploughman’s Lunch.”
“Very promising indeed,” Maire wringing his Hands to conceal their trembling. “Well then, let us just . . .”
By the Time what is arguably the first British Pizza is ready to come out of the Baking-Oven beside the Hearth, the Road outside has gone quiet and the Moorland dark, several Rounds have come and pass’d, and Lud is beginning to show signs of Apprehension. “At least ’tis cloudy tonight, no Moonlight’ll be getting thro’,” his Mother whispers to Mr. Emerson.”

Well, yes of course - it was obviously a communist plot.

I had a similar experience when I discovered tacos in the 1970s.

Reminds me of my tacos-awaking. Southern Ontario, agricultural fair, the “International Food Court” had a stall by El Paso (probably). My 12-year old self gorged himself on too many tacos topped with the wonderful “salsa picante”.

While my white-bread digestive tract did suffer, it was my starting point in exploring new foods. No matter where I go, I try to eat like a local.

I finally understand where Americans get their idea of what a Canadian accent sounds like! 1956!

I don’t know. Could be an alternate world.

This reminds me of a pizzeria that opened near my home many years ago, it was run by very recent Chinese immigrants who had seen pictures of pizza, but never actually tasted one, nor read a recipe for one, so they just guessed at what the ingredients were by the picture, and a very limited description. Their initial offering was … interesting.
They managed to get the dough right, and it looked like the pictures, but they used chunky spaghetti sauce, salami instead of pepperoni, and Havarti cheese. It was actually really good, but very much not what you were expecting when you bit into it the first time.

They managed to get the dough right, and it looked like the pictures, but they used chunky spaghetti sauce, salami instead of pepperoni, and Havarti cheese. It was actually really good, but very much not what you were expecting when you bit into it the first time.

That… actually sounds pretty good. Shame I don’t have any salami or pizza dough in the house, otherwise I’d try it out…

They were right to fear it, for now it controls our lives.

The mozz must flow…

Or you know, actually going to Canada today. Canadians say they don’t say aboot, but at least in Ontario they really do even if they can’t hear it themselves. It’s like Southerners who really can’t hear their drawl.

They were right to fear it, for now it controls our lives.

I wouldn’t have it any other way. 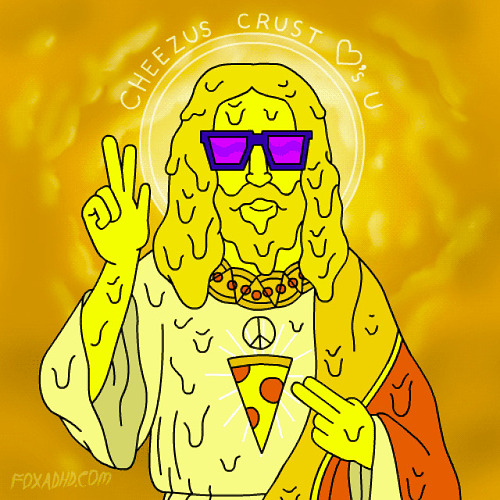 I tried making my own pizza with Pillsbury dough when I first moved out on my own. (Because that way is super cheap and easy.)

Just gotta say, had that been the only pizza I ever tried, I would not have gone back!