Are we back to the stopped clock discussion thread again?

I find it always comes around

Road Apples is all I saw.

Yeah, I mean, if the question was just “Who is the greatest American woman” then answering, “My mom” might score you some points with some people who go, “Oh, that’s nice.” But you’re going to put your mom on the $10 bill? What the fuck?

And Margaret Thatcher?!? I’ve got an idea, how about we put a watermark on the bill so that if you hold it up the light you can see her cabinet sexually abusing minors behind her. That woman ought to be remembered as a monster, both for what she did to England and as a person.

That woman ought to be remembered as a monster, both for what she did to England Britain and as a person.

FTFY. She did far worse to Scotland and Wales than she did to England.

The ever offensive Frankie Boyle on the funeral planning…

Carly Fiorina: "What I would think is that we ought to recognize that women are not a special interest group. Women are the majority of this nation, we are half the potential of this nation and this nation will be better off when every woman has the opportunity to live the life she chooses.”

What is the context for that second gif?

FSM I love me some Mock the Week.

Even Hugh Dennis and Andy Parsons?

I love all of them, but honestly Milton Jones is my mancrush.

Oh, and on topic. Anyone who answers the question “which woman, $20 bill” with “my mom” doesn’t think much (or at all) of women.

(I’d have answered Curie even though she wasn’t American)

I still think any one of those contenders would be a nightmare, but Fiorina got in a couple of great lines. When asked a question about Trump’s earlier comment…

“Look at that face! Would anyone vote for that? Can you imagine that, the face of our next president?”

“Women all over this country heard very clearly what Mr. Trump said.”

After which Trump, showing that he still just DOESN’T. GET. IT. tried to walk it back with

Christ on a pogo stick, man. The whole point is that her physical attractiveness has nothing to do with her qualifications for the office. (Which are admittedly almost as bad as Trump’s.)

I don’t want either of them, but Carly at least…
(Oh gawd, this one hurts)… Is classy.

Yeah, she really took on Trump, which is actually quite something. There was a post the other day about how Trump is basically a grade 8 mean girl and none of the adults seem able to reign him in. I don’t really know anything about Fiorina but if her only qualification is, “Can stand up to Trump” then that’s more than most of them have going for them.

Of course when people say Trump can’t win, Fiorina really can’t win, as in actually doesn’t have much support. Though hilariously she is polling better in Iowa than Jeb Bush who is still somehow regarded as the winningest candidate despite having single digit support in polls.

I believe them all when they say each other can’t win.

Bush is hopeless. Whatever happens, he won’t be the candidate.

It’s like 2012 again. I’ll be generous and say that the two sanest ones who’d have a chance in the general are Kasich and Pataki, and they have zero chance of winning the primary.

I don’t know what’s going to happen. It was clearly meant to be Bush. But it won’t be.

Carly is someone you don’t want on your bad side. She makes hard, difficult (and wrong) calls that most mere mortals would vacillate about. And in a similar vein to Trump, her claims of success are quite exaggerated. (Though to be fair, both trump and Carly have been personally successful, their businesses and employees not as much).

She would be a terrible president. Not because she couldn’t hack it, but because she has a ruthless worldview and management style that consolidates power among very few.

Of course when people say Trump can’t win, Fiorina really can’t win, as in actually doesn’t have much support.

Probably not, but she does have at least one thing going for her—her negatives aren’t nearly as high as Trump’s. For example look at this recent poll of Hispanic voters: 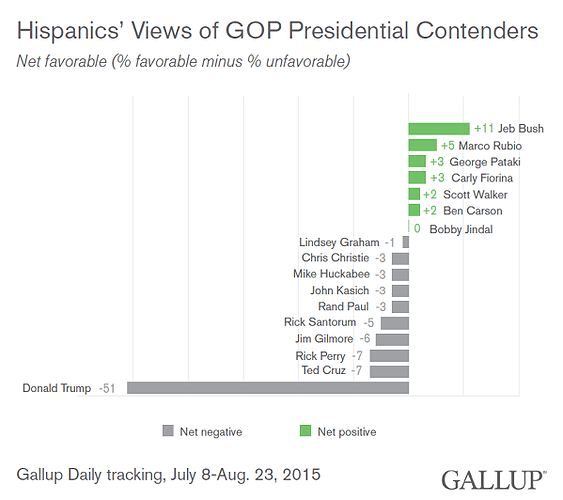 In the overall electorate “strongly unfavorable” views of Trump outnumber “strongly positive” by a 3-to-1 ratio. So if Fiorina somehow wins the party nomination, fewer people will show up to vote for the Democrat simply because they hate the GOP candidate so much.

Well I don’t find him offensive and love the actual glee he seems to have at going oh this is the taste line I shouldn’t cross? Challenge accepted!

Here’s an interesting analysis of the latest GOP debate:

Bernie got about ~45,000 new twitter followers during and after the GOP debate the other night. In other words, Bernie got the most new twitter followers of any candidate… From a GOP debate.

You do realize that between the large Sanders upswing of support, and the Republican primary disaster, it’s looking like this might be a really good time to be a progressive, intelligent American. I’m trying to remain hopeful, anyway. FEEL THE BERN!!!

I don’t think it will be a Bush OR a Clinton in the end. I am starting to feel GENUINELY hopeful, based on the actual data, and not the mainstream media smokescreen.

People thought a black guy with a Muslim name would never win, and in the end, he really destroyed both elections. I think a fiery liberal Brooklyn Jew may just be what resonates right now. And I wouldn’t think so, but the thing is, Sanders is REALLY GOOD at communicating in a direct, passionate way, that I think people on both sides will like. He’s the kind of guy who can school an opponent in a debate in two sentences, and people just know he’s being honest. He would DESTROY Trump or Fiorina. The guy knows how to speak.