Omarosa turned down $15k a month to stay silent about Trump

if she has crimes on tape, she needs to turn them over to prosecutors

otherwise it’s already been proven there is absolutely NOTHING trump can say that people care about, the tape on the bus was absolutely disgusting but yet he won anyway - now he lies or exaggerates every single day, right to the public and still, no repercussions of any kind

I used to really, really like that line “don’t boo, vote” until it failed us all, we get one last chance in 2020 and then we are so screwed for decades

I agree. I read that she has him saying the n-word on tape. That will only further endear him to his demographic. “He talks just like he’s one of us!”

Believe me, I know it’s tempting to believe anything these people say if/when it confirms what we all know, namely that Trump is perhaps the most garbage person in modern history. But remember, folks like Omarosa (or Daniels, or Cohen, or whoever is getting coverage this month) are people who voluntarily associated with Trump and hitched their wagons (or, in Daniels’ case, other parts) to him in one way or another.

In other words, they are ALSO garbage people who should be trusted roughly as far as they can be thrown, and we should all be careful about giving them any sort of status as noble figures of the Resistance. I know, I know, nobody is arguing that someone like Cohen a noble figure, I just think the enemy of my enemy dichotomy is an easy trap to fall into.

I think I’m just enjoying the moment that a person who said " all will bow down to Trump" is eating those words so righteously. Maybe she woke up, maybe its just sour grapes she got tossed aside. Either way, crow doesn’t taste very good, does it Omarosa.

Personally, I’d go for the payday, but I think I’d ask for an annuity. That way I get paid even if you-know-who becomes bankrupt. How much hush money has he paid out now?

Lump sum for a multi-year contract. Definitely the way to go with these guys.

I’d start with a 5 year contract, which would cover the reelection campaign.

oh my glob, this is hilarious yet terrifying (we need a word for that) have you seen her on celebrity big brother? (apologies if I am the very last to have never seen it)

"its NOT going to be okay"

In other words, they are ALSO garbage people who should be trusted roughly as far as they can be thrown, and we should all be careful about giving them any sort of status as noble figures of the Resistance.

I don’t think anyone in the Resistance is trying to make her out to be a heroic figure. This is more along the lines of what happened when Steve Bannon dished out all kinds of dirt on Trump to Michael Wolff for the Fire and Fury book, prompting Trump to tell the world that Bannon was a loser who cried when Trump fired him.

It’s just satisfying to watch all the rats start to eat each other.

offered $15,000 a month to stay quiet about all things Trump

Huh. 15k per month is what Trump’s former bodyguard Keith Schiller has been getting from the RNC. businessinsider.com/rnc-trump-body… twitter.com/seungminkim/st… 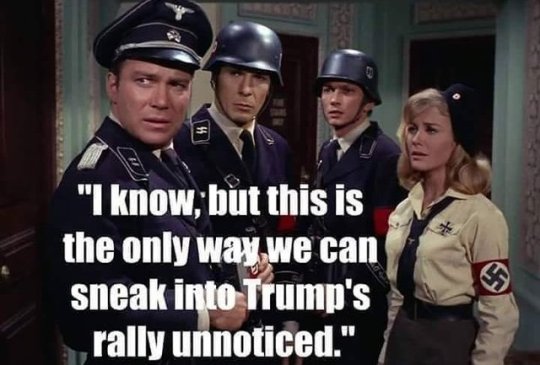 Maybe she woke up, maybe its just sour grapes she got tossed aside.

That assumes she actually believed them at the time and it wasn’t just another bit of disingenuous nonsense, like everything else that comes out of the mouths of Trump and everyone around him. I’m sure she was saying what she thought would play well with Trump and advance her position. “Reality” and even “belief” don’t mean anything to these people relative to what they say - language exists to strategically advance their agendas and soothe Trump’s ego, that’s it.

hilarious yet terrifying (we need a word for that)

The Trump candidacy forced me to coin “hilarifying” (“terrarious” sounds like something that happens in a terrarium).

But ha, yeah, she “did it for the country” (and not her own self-interests). Suuuure… I bet the White House is full of people who say that right now, and it’s true for none of them.

But ha, yeah, she “did it for the country” (and not her own self-interests). Suuuure… I bet the White House is full of people who say that right now, and it’s true for none of them.

My hypothesis for the next five minutes is that she wasn’t actually offered $15K a month like Schiller; instead she was only offered something like $5K a month (because this particular crime family is racist and misogynistic). Knowing the bodyguard was offered more, she got offended and decided to tell all.

she wasn’t actually offered $15K a month like Schiller;

No, that was the offer. But then they said they’d throw in a lifetime supply of Trump Steaks and that’s when she backed out.

You’d think by now there’d be enough ex-Trump staffers to form a union and offer Collective Bargaining for terms and conditions on NDAs etc.

Or maybe they already did, and $15k/month is the standard rate.

Never mind the bankruptcy concerns, Trump has a well-documented history of not paying. A lump sum, in advance, with no agreement or concession until you have the money is the right way to deal with this scum.

I expect Schiller to have a better taste than that.

I suspect she thought she could do better with a tell-all book either way.

I suspect she thought she could do better with a tell-all book either way.

Especially if she had reason to believe Trump might be removed from power sooner rather than later, thus jeopardizing the monthly payouts.

Or she thought he wouldn’t be good for it, like usual.