Overturning Roe v Wade is just "the end of the beginning," says Mike Pence as he vows to continue stripping Americans of their rights

Originally published at: Overturning Roe v Wade is just "the end of the beginning," says Mike Pence as he vows to continue stripping Americans of their rights | Boing Boing

Is Pence even still a force in politics?

The forces behind him are.

And golly-gee the orange hemorrhoid had just ruled out Pence as a running mate in 2024. What’re the chances that whomever the screaming carrot demon does choose as a running mate (nikki haley) won’t think twice that that will be the end of their political career? (“well, except as a fox"news” blathering head")

Vote the fuckers out. Or we’re all fucked. 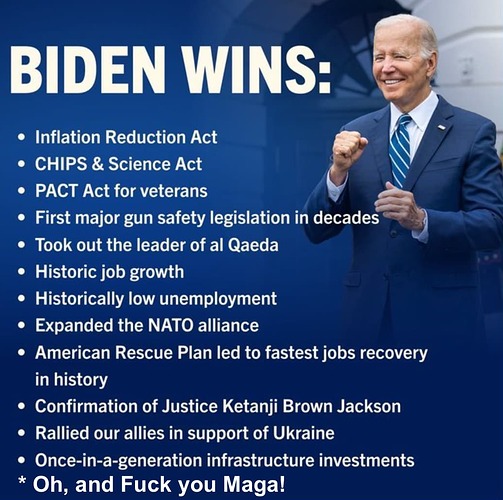 So what about that AIDS pandemic while you were in charge Mikey boy? Where did you welcome efforts to save people?

Obviously “life” has a special repugnican meaning. In contrast, they really don’t care about the living unless they have large, well-stuffed wallets, which open readily in return for the odd ‘favour’.

“No one makes the Baby Jesus sad on my watch,” says man who is sure that the Word of God means exactly what he wants it to mean.

Say it loud, Mike, say it proud! Don’t let anyone raise any doubts about where your Party stands on the proper place of women in the USA – you’ve set a stellar example with the title you’ve given your wife: Mother.

Or we’re all fucked.

And no Plan B, either.

So in his zeal to protect lives, does he say anything at all about death penalties in half of the states? Death Penalty States 2022

It would be nice if they cared about such logical consistency.

Pence is a true believer and still thinks that the rest of the GQP is, too. Which makes him the biggest chump of all.

Sucks to be him but all in all good for the rest of us in the current moment.

Yeah, I almost feel sorry for him, but then remember the regressive, evil fuck that he is and how people like him fucked me up as a child and that all he really wants is a never-ending stream (quiver?) of children to manipulate and abuse with his dirty, perverse perception of god. Then I don’t feel so bad at all!

So, is “Hang Mike Pence” a platform of this convoluted “pro‐life” agenda? If Mike Pence opposes it, does that mean he hates America?

…overturning Roe and stomping all over women’s rights to their own bodies is just the start!

Yep.
Anyone who isn’t a Rich, White, Xtian, Straight Male is a lesser being, and will be treated as such.

Not a man? You are a bipedal incubator and pleasure palace for men. Nothing more, so STFU.
Not white? You were cursed by gawd amighty. Says so in the Wholly Babble!
Not rich? You too are cursed, since gawd amighty makes the people it loves rich.
Not straight? Your lifestyle choice is an abomination unto gawd, so if Conversion Therapy won’t work, then stoning will.
ETA:
Not Xtian? You’re not a Real American!
Your new home will be a work camp, along with all those evil Others… those who are allowed to live…

Lord Dampnut was bad enough, but if these fuckers get any more power, it’s gonna get real bad, real fast.

He’s hoping that he’ll be forgiven and the fatwa declared against him will be lifted.

That’s a good point, but there are plenty of Catholics who are anti-abortion and anti-death penalty. Now what?

Re: Pence. He’s just making sense (conservative-wise). Why would they stop at overturning Roe v Wade. They are “winning.” Why not keep going, pushing back every single SCOTUS precedent they can get their greedy little sausage-fingers on? (Altho, strangely, for people backing a white Christian ethnostate, they find Plessy v Ferguson off-limits; I’m sure that will change in time.)