FUCK HIM. The only thing they worship is money.

This “War on Christmas” thing is one of the more bonkers conservative talking points. If anything American society has been on a full court press, ramping up the Christmas product shilling leading up to Black Friday. If anything, there is too much Christmas!

And the skies over the podium opened and God spoke, “This is my beloved Son, in whom I am well pleased.” And those present fell to their knees in fear and joy. And then God spoke again, “Ha Ha, just kidding. This guy is a freaking moron, and you’re worse for electing him.”

If he wants to turn the empire christian by fiat, he’s not so much Orange Julius as Orange Constantine.

At what point are jewish folk going to start thinking: holy shit this guy is nuts and he’s half a step away from sending his skinhead hordes to smash the windows of all the shops… folks the turd didn’t fall far from the sphincter: Trump’s Dad was arrested at a KKK rally IN THE KKK ROBES! The neo-nazis and kkk are literally marching with torches and killing normal folk. They are greatly emboldened by Herr Drumpf and his ‘blame dark’ rhetoric. Wake up sleeping giant! WAKE UP!

He partnered with freakin RUSSIA to get elected. How much lower can you go? (cannibalism, but at this point I wouldn’t rule it out…) Don Jr could tweet: well, hunting Man is the ultimate sport, dontchaknow. All us rich f!cks do it. And Eric will just continue to eat chips of paint off the window sills in the basement.

Orange Julius also dropped a Merry Xmas shout out to white supremacists: “We are proud of our history.” he said.

Or is that “heritage”? Where’s Jeff?

There is a solid core of his base that will gladly follow him into the fires of Armageddon - white-christian-fascist-bigots. They’ll drag a lot of better christians along with them. Screw him and screw them.

By their works shall you know them.

We forget he’s a follower of Supply Side Jesus. 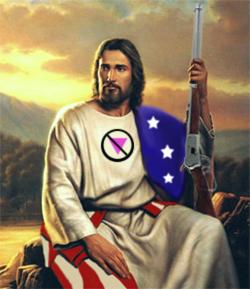 This makes me so much wish I believed in God, b/c if one did exist, he would for sure smite this loud-mouthed phony for claiming to “worship” anything at all but his own ego.

The fact that lightning didn’t strike him dead on the spot is proof enough for me that the Christian god doesn’t exist.

I seem to recall Trump taking an oath to uphold the Constitution, but anyone who’s done businesses with him knows how much his promises are worth.

Don’t you know? They’re the victims.

There is a right-wing ‘christian’ church / voucher school that opened up 50+ yards or so from my house this past year.

One day they were having an outdoor BBQ for Jesus and were blasting the really bad christian pop music. I was outside working on the house and was getting annoyed hearing this music disrupt our quiet street. Trying to be neighborly, I went over there and politely told them to lower the volume. It turned out that their speaker cable didn’t quite reach to their party so they had the music up extra loud so they can hear it where they were having their party. I was willing to help them fix this with some longer cable.

Anyway, they didn’t turn it down so I ended up going back there with my wife to get this resolved and the pastor freaked out. He refused to turn the music down and shouted “We know you hate us!” and started throwing a fit and threatened us. A cop just happened to be coming by and calmed things down.

I was just trying to get them to turn their music down a tad but they’ve been brainwashed to think that everyone is out to feed them to the lions that they’re already on the defensive.

And, lo, when Jesus grabbed her by the pussy, the apostles stood and cheered “Hosanna!”

I was just trying to get them to turn their music down a tad but they’ve been brainwashed to think that everyone is out to feed them to the lions that they’re already on the defensive.

I guess what Christians are going though can be summed up by this quote:

“When You’re Accustomed to Privilege, Equality Feels Like Oppression”

I said that during his inauguration - right after he put his hand on the Bible.