Richard Spencer too stupid to interview

Does he have ice cubes in whisky? The man is filth.

Seriously, I could barely handle even a few minutes of that guy. He’s got a really punchable face.

Sad thing is, the more interviews Spencer gets, the more his message gets out. The more he can visibly frustrate his opposition, the more empowered the people that message reaches will feel.

Forget punching: They need to stop interviewing this guy. He may well not even believe the words coming out of his mouth–but he knows exactly what he is doing when he says these things.

Consider how the men who died on D-Day would react to this scum. A famous video from Vietnam comes to mind.

I’m really against personal violence, but if Richard Spencer makes drinking whisky a hallmark of white supremacy I’m going to kill more than a few people.

He’s got a really punchable face.

Heck, I don’t know how he resists punching it himself.

I would have actually preferred someone interviewing this trash that had some better comebacks. Like when Spencer claims African Americans are better off and living longer because of slavery. Why wasn’t he asked how that went for the ones that were brought over, raped, hung, beaten, etc. They were not ‘living longer’ or ‘better off’ than those that were not stolen from their home land. And his argument that slavery brought Africans here and now they live a better life. Well, no, they can come here on their own now and still live that better life and they didn’t have to go through slavery to get here. Slavery was not a gift to black people (can’t believe I have to say that) because they could have gotten here via a completely different route that didn’t involve slavery at all, called immigration. And had it gone that way, that slavery past would not have been there and race relations in this country would arguably be a lot better.

Unfortunately, I think that followers of Spencer who watch this interview actually feel he won the argument. What a shitty world we’ve created.

One might also say his insane views don’t require any response, but unfortunately if we give him a voice with interviews like this, I feel they do, because there are way more people out there that agree with him than I think any of us realized until the last couple years.

Richard Spencer is obviously a racist dick, but what did the interviewer really expect from him?

I would have actually preferred someone interviewing this trash that had some better comebacks.

That would have been even more pointless; facts and logic have no impact on someone who has willfully decided to inhabit a completely separate reality from the one that most of us reside in.

The only thing that would make someone like Spencer ‘see the light’ is if he was somehow magically switched into the body of an African slave in the 1800’s and was forced to personally endure the constant abuse, exploitation and denigration which built the US as we now know it.

I don’t fault the interviewer for not even bothering to rebut that nonsense; instead, he shouldn’t have wasted his time in the first place.

I agree with the commenter above who said that the media needs to just stop giving that willfully obtuse moron interviews; he’s worse than a broken record, and there is nothing actually useful to be gained by giving him any more attention.

I don’t fault the interviewer for not even bothering to rebut that nonsense; instead, he shouldn’t have wasted his time in the first place.

Yes, this. I actually edited my response and added basically what you are saying here. sorry, I added that after you responded, but I knew that would be a response after writing it. He should not have been given the spotlight. but because he was, and because people actually follow this guy, he needs to be shot down hard in my opinion.

By Spencer’s logic, if white men were taken away to work as slaves on an alien planet whose inhabitants had better technology, then those white men would have much better lives. (EDIT: I really wish Younge had said this to Spencer.)

Note to the aliens: when you come, Richard Spencer is the first guy you should take. Hey, he wants to go!

Notice the way he ends every stupid racist remark with “How can you argue with that?” to get a reaction? Richard Spencer, like Milo Yiannopoulos, is a professional troll.

“If Africans hadn’t existed, would history would be exactly the same today”

I got news for you Spency…if Africans hadn’t existed, the human race wouldn’t exist.

I’m not taking a position, but I just wanted to point out that Younge has an article out today in The Guardian that addresses the criticisms raised here: 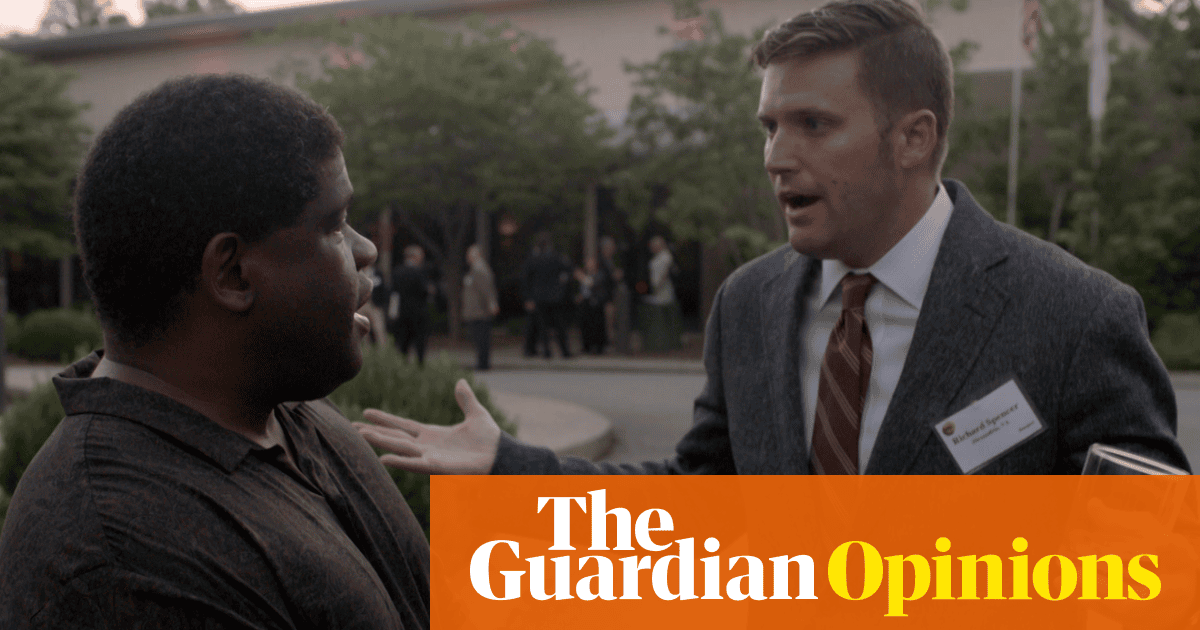 Why interviewing Richard Spencer was a risk worth taking | Gary Younge

nothing actually useful to be gained by giving him any more attention.

It would be nice if the news entities here could get their act together and agree on a set of voluntary media reporting standards. Starve the trolls, and avoid copycats, at the very least.

I got news for you Spency…if Africans hadn’t existed, the human race wouldn’t exist.

Hey now. I like my liquor cold. Also, melting ice an add to the flavor and aroma.

It would be nice if the news entities here could get their act together and agree on a set of voluntary media reporting standards. Starve the trolls, and avoid copycats, at the very least.

Yes, exactly. Treat the asshole like a combination of the KKK and a clown, because that’s what he is.

INTERVIEWER:
(interrupting) That was white supremacist and professional troll Richard Spencer, trying to rile up everyone with his ridiculous racist bullshit. Back to you, Jane.

Just like people still think they are winning under Trump.