Sassy Trump Has Himself a Hissy Fit at the Debate

I think what sets me off with these is Trump doesn’t need over the top for contrast. He’s already so far past the line, looping back around again does nothing. I find reading transcripts of him more illuminating.

Listening to trump himself is painful. Reading transcripts of his speeches is confusing, but contrasts well. These videos just feel like gargling with razor blades.

That was one of the craziest bits in an evening of unreal Trump statements. “I was going to say something horrible and inappropriate about your family but I didn’t. SEE HOW PRESIDENTIAL I’M BEING?”

See how big of a feminist I am for not raping you? I don’t rape women all day, therefore I’m highly qualified to be president of the League of Women Voters!

Also, see how I’ve not been beating my wife? That means I’m, not just a good husband, but a great husband! A tremendous husband.

Weirdly, his followers have declared:

I’m sure there’s more conspiracies. From what I gather from Breitbart and others, the moderator’s job was to put Hillary on the defensive and make sure Donald came out looking good. Otherwise it’s another lefty loony hit job.

As I was watching the debate last night, I really wished it would somehow be possible for Serafinowicz to live-dub it (I would accept a modest time delay for this service).

This’ll do for now, though. Probably the best Sassy Trump yet.

Or maybe Billy West could do it in his Zapp Brannigan voice.

I really hope he does that.

"I was going to say something horrible and inappropriate about your family but I didn’t.

“I’m not going to bring up Hillary’s private family problems, so give me some credit, despite the fact that I’m still reminding everyone of those issues by bragging how I didn’t bring them up.”

It’s possible he came up with this ‘strategy’ on the fly, but I would bet either he or someone in his campaign suggested it before the debate: how can we try and embarrass her on a personal level while appearing “classy”?

To be fair, I did grapple for a minute at the moderator not taking Hillary to task a little bit more.

Vastly fewer things obviously to deal with, but I expected at least 1 or 2 more tough questions for her (especially with his right wing alignment). I decided could well be the moderator decided that the future of the free world didn’t hinge so much on her baggage compared to his.

It’s possible he came up with this ‘strategy’ on the fly, but I would bet either he or someone in his campaign suggested it before the debate: how can we try and embarrass her on a personal level while appearing “classy”?

Absolutely this. “I am not gonna say it. But you know what I am saying…” 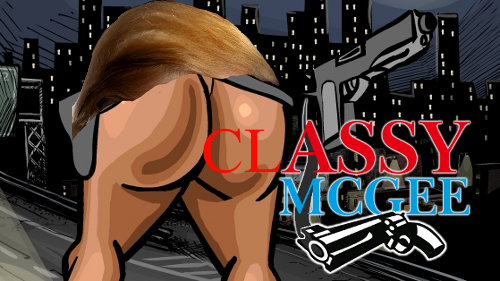 You know, if Sassy Trump did the whole debate it might actually be watchable.

I have the solution: do not gargle with razor blades.

Hundreds of millions of ads.

I think the post-debate hissy fit, the one where he’s saying almost all the polls show him winning, has been even more entertaining.

Complaining about attack ads will not will anyone over.