Genisys? Really? Is that Genesis misspelled, or a telecom company?

Since it’s supposed to take place in an alternate universe I guess that’s the correct spelling over there.

Damn foreigners with their funny spelling and alternate time lines.

This seems to be picking up where T2 (the last good movie in the franchise) left off.

I’m watching this one!

I was prepared to be jaded, but it looks pretty good (all that time-travel nonsense aside). The young woman playing the young Sarah Connor actually looks like young Linda Hamilton, and seems to pull it off pretty well, at least in the trailer. I’ll definitely be watching this one… when it comes out on Amazon Streaming, of course. I haven’t been to a real movie theater in soooo long…do they still have those?

do they still have those?

Only in some alternate timelines

If those are the same timelines that I don’t have an infant son, I’m definitely going to see this in the theater. Then.

I’m split on this. On the one hand, the producer clearly understands that, if you’re going to revive a franchise this old, you have to hit all the nostalgia points the original audience wants touched, and still deliver a visually compelling and narratively interesting. Clearly, the nostalgia is the selling point in this trailer-- the hope here is that the original fans will move a new generation to get interested in Arnie and Sarah all over again. But can this film deliver on being new and interesting?

George Lucas failed at this, which is why the “prequels” failed. Jurassic World is also not succeeding in hitting the highs Jurassic Park gave us. (Those, in fact, may be completely inaccessible to the owners of that franchise; you can only invent CGI once.)

So, coming out soon for our delectation:

And people wonder why I wait for things to come out on video. It’s because I’ve already seen it twenty years ago.

There was a gag in one of the Airplane movies that played on the Rocky franchise. 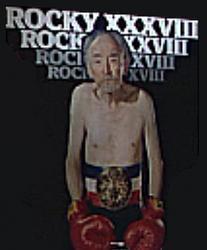 Just looked it up. For reals, but Anthony Michael Hall will not be reprising his role.

Well, it was funny when I saw the movie, because Rocky XXXVIII was absurd. Then.

How about a new fucking idea? This is just churning out different versions of the same crap that’s already been shown to be market-succesful.
Every movie on your list is a remake or sequel.
Sorry to rant at you, but I don’t see any film, just product.

That’s the point I thought I was making…

Oh, sorry. Nuance and snark can be hard to spot online.