The "Freedom to Breathe Agency"

This seems legit, though. Anybody who knows anything the ADA knows that businesses are strictly forbidden from asking the reason one is seeking an accommodation, and if they make the mistake of asking or doubting anyone’s claim, the HIPPA police come down on them like a ton of bricks and usually seize the entire operation. That’s just common knowledge.

Spelling and grammer geeks just shows that your one of those eletes which, proves my point

Please, please, please, someobdy with more time and skills than me - make up fake “Citations” that we can hand to people who present this card. With lots of the number 666 on it, maybe a $200 fine and a Verizon 5G logo, . And signed by Bill Gates and George Soros.

There’s no such thing. HIPPA compliance is largely self-regulated and unrelated to the ADA.

You forgot your “/s”

There’s no such thing. 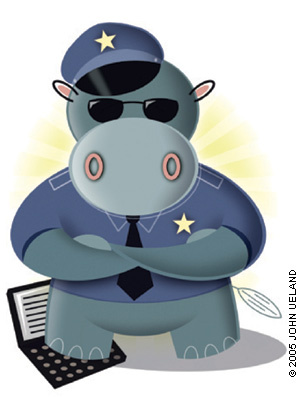 Why is he standing on a laptop?

You come up with a better way to safeguard digital privacy than a hippo on a laptop, smart guy.

Oh, it is actually standing on a laptop? I thought it was weird clip art of a sewer grate or something. Well, carry on, then, I suppose

I personally believe that anyone refusing to use PPE in a public building or any gathering should be treated like Typhoid Mary.

We provide library cards with proof of a local mailing address. Several years ago, some scammer was making ‘residency cards’ and selling them, while assuring the purchasers that they would entitle them to the same discounts and benefits as residents. Many visitors were very irate when they found we wouldn’t accept them as proof of a local address. Scammers gonna scam.

Also, every time you hear the anti-mask protesters say “my body, my choice”, do you think they’re as vocal when it comes to access to abortion services??

I am absolutely CERTAIN they are just as vocal…but the words they use in that case are “your body, my choice”.

Yeah, this idea that you could use the ADA as a bogus excuse to get around wearing a mask has been promoted on talk radio for a while. I heard it from my nutjob mailman.

Does freedom of speech mean you have the right to deliberately give a motorist bad directions that will take him/her over a cliff?

Why can’t Republicans stop killing us?

You come up with a better way to safeguard digital privacy than a hippo on a laptop, smart guy.

It’s the cyber, so it needs more lasers. Still, pretty good for a first draft.

It is their nature…

The Scorpion and the Frog

The Scorpion and the Frog is an animal fable which teaches that vicious people often cannot resist hurting others even when it is not in their interests. This fable seems to have emerged in Russia in the early 20th century, although it was likely inspired by more ancient fables. A scorpion, which cannot swim, asks a frog to carry it across a river on the frog's back. The frog hesitates, afraid of being stung by the scorpion, but the scorpion argues that if it did that, they would both drown. T...

Can we just get all the idiots together in a crowded stadium or maybe a rollicking MAGA rally, everyone entering has to lick each others eyeballs continually, we lock the doors for a few days or weeks and problem solved. Jesus people my grandad had to fight the nazis and stare down the soviet union. You are being asked to wear a face covering in public and stay home as much as possible… in a couple years those masks are going to be a forgotten memory. Wear the dang mask or you will also be a forgotten memory.

Reminds me of the fake license plates that sovereign citizens put on their cars which “exempt” them from registration. Because it’s not a car, it’s a non-commercial conveyance, you see.

spreading a potentially deadly virus to others

No, its definitely a deadly virus.

“Great, we have curbside pickup for people in your situation. It’s designed for this sort of thing. No, you can’t come in.”

None of the maskhole karens in that video can coherently speak, so why expect coherent writing?