Things I miss: Davey and Goliath

By today’s standards of Jesus TV it’s quite innocuous. Lutherans in general are fairly innocuous, except for the Missouri Synod.

But how come only the white family gets to live in a single-family house and everyone else lives in tenements?

followed by All Star Wrestling (back when it looked like it was filmed in somebody’s basement).

It was Wrestling at The Chase for me but Davey and Goliath was on at like 6am/7am early anyway… even as younger kid I was up way late on Saturday Night (SNL and then The 3 Stooges) so I was usually quite asleep at that time.

Despite growing up in the 70s, I never saw this show. I heard children talk about it, but never saw it.

I always considered that show punishment for getting up too early on a Saturday.

Luckily by the time one of the non-network stations started showing Robotech @7:00 on Saturdays.

This will liven it up.

I wonder if communion is the reason why it’s legal to give alcohol to five year olds in the UK?

The Sunday School was great; Efron played all of the parts, as I recall. It was loopy but respectful, never preachy or heavy-handed.

Wow! Thank’s @jlw ! I’d heard of this special episode, but never saw it. It was only shown on film in churches and such.

We we’ren’t a religious family, but my siblings and I watched D&G faithfully on Saturday and Sunday mornings. It could be weird and campy (ALL-ALONE! ALL-ALONE!) and sometimes had cool trippy imagination sequences, like where Davey and his sister imagine visiting a space port. Or – MAN! – an episode where Davey indulges in vicious revenge scenarios. (Tying up a bully to a tree in the wilderness and leaving him there gagged to die, or surprising the kid by a patch of wet cement and pressing his face into it. NO REALLY!)

There was a time, and for all I know still now, when I could tell you what episode of D&G I was watching within a few seconds. The vast majority of the episodes were great little adventures about being responsible and aware and not a little shit.

Davey could be wonderfully rotten, like when he mocked a deaf kid, or vandalized a well in a forest clearing. Not Bart Simpson rotten, but a typical kid.

I didn’t understand it, still don’t. But it was interesting.

The only time I ever saw this when I was growing up was when we visited my grandparents in Fort Worth. It wasn’t on tv anywhere where we lived. I vaguely remember being entertained by it, but my grandparents were uber Southern Baptists, so I’m sure there was some attempted conditioning going on. Apparently it didn’t take, thankfully.

I didn’t understand it, still don’t. But it was interesting.

Whoso eateth my flesh, and drinketh my blood, hath eternal life; and I will raise him up at the last day. For my flesh is meat indeed, and my blood is drink indeed

I think that it was out of Minneapolis.

My favorite scene was when they are at the museum looking at a sabertooth tiger exhibit. Davy says, “These are extinct now,” and Goliath says, “Does that mean they smell bad?” As a seven-year-old, I thought it was the most hilarious thing to have ever appeared on television and I repeated the line for years. I was shocked to later find out that it was a religious show.

One of the highlights of my undergrad bullshitting was taking a class on Japanese art and culture and writing a paper comparing early Japanese puppet theater with Davey and Goliath. If I remember correctly, this was the paper I got back with the comment “you’ve written this in such a way that makes it difficult to grade,” which I took to mean he knew I was clearly talking out my ass, but I had done a really good job of it, because I got an A.

I watched them simply because they were on TV at the same time I was flippin’ channels. Then again, growing up in the Bible Belt [Unbuckled], we thought Lutherans were Christian-Lite: nice, but not that interesting. It was cute, though. 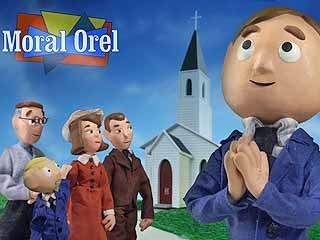 This solves a mystery for me why I never saw these here. It was from the Lutheran Church.
And here in the deep south–it might as well been Catholic propaganda.