Meanwhile in another reality… 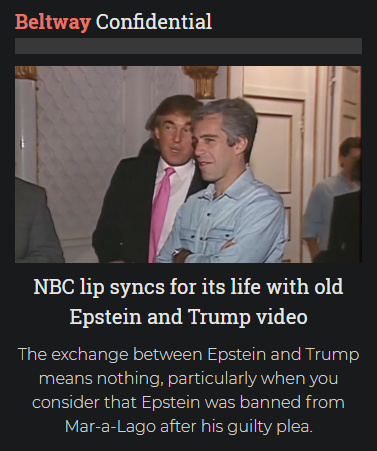 I’ll bet good money the reason Epstein was barred after pleading guilty was, Drumpf thought that pleading guilty meant something was “wrong” with Epstein. Drumpf has such a damn childish thing about making every last thing a pissing contest, and he doesn’t like anyone who doesn’t share his particular type of emotional damage.

Can’t have losers at the Club 'ya know /s

That’s not why Epstein was banned from Mar-a-Lago. The apparent reason was because he allegedly got physical with a club member’s young daughter. And he was definitely un-banned within a year, as pictures of Epstein with Trump at the club document.

Good article, and I guess it is a pretty much American thing (esp. given the American Jewish usage noted in the article vs. the German usage). I can’t think of any -steins over here who’d get away with steen. Maybe we’re closer to the German approach over here.
No doubt someone will be along shortly with a list of UK steens spelt stein.

Either (eether or eyether, I don’t care

) way, despite my infinite contempt for the man, I’ll try to hate him a little more for being a steen not a stein.

But not seeing why Trump would see that as a problem. Unless he’s jealous.

I can explain it. These “Evangelicals” have a weird fixation on the “end times”, and are looking for God “Rapture” them up to Heaven. A lot of them decided that Trump was such an asshole, he was more likely than McCain to fulfill the “end time” prophecies and actually bring about the “Rapture”. They think he’ll do that by being such a touchy, my-dick-is-bigger, knee-jerk unthinking asshole who can’t get along with other countries that he’ll start a major war which would end in a nuclear exchange.

That’s right. Some people actually voted for him BECAUSE they thought he was more likely to start a nuclear war. I personally know two women who admitted they voted for Trump for that exact reason. They want him to do something that would get this country nuked because they think that would trigger all the Apocalyptic stuff from the book of Revelation and the Rapture and then God would reach down and save them and all their friends while everyone else fries or dies of radiation or disease or starvation. Yes, there are people out there, Americans, not Russian spies, who voted for Trump because they want to see this country destroyed. They think they can use the smoking corpses of everyone they don’t like as their personal stairway to Heaven, and they wanted Trump in office to build it for them.

Yes, there are people out there, Americans, not Russian spies, who voted for Trump because they want to see this country destroyed.

I know a few older folks, well into their well funded retirements, who say “Well, it had to end sometime.”

Well, FUCK them! Why did they have children then? Why? To watch them burn and or suffer?

Shitbirds of a feather.

There is nothing like the power of feeling righteous

The consistency is racism.

I thought this Sam Bee segment was worth the watch:

The consistency is abortion. Always abortion

For GOP/Evangelicals the quality of personhood:

Newsflash: Trump is an absolute pig! Also newsflash: people who support him couldn’t care less. What they care about is the economy and “winning”. So it seems to me that if you want to change their minds about Trump, make the point that the prosperity America is enjoying has nothing to do with Trump.

A lot of them decided that Trump was such an asshole, he was more likely than McCain to fulfill the “end time” prophecies and actually bring about the “Rapture”.

That was sort of Susan Sarandon’s thinking at the time too.

I honestly think it really boils down to control.

I agree. Specifically staying in control. I’m convinced Trump was probably more-or-less apolitical most of his life, then became one of these Fox News zombies. His campaign is proof that anyone could run for GOP nominee (though being white male is a huge help) as long as they just said all the basic Fox News talking points: cut taxes, expel Muslims, close the borders, end abortion, fear socialism, etc.

2019: I don’t know the guy. He’s an horrible, horrible example of a human being.

1992: Here Jeffrey, good ol’ buddy of mine… I brought us a cheerleader buffet so I can look macho and make my ex jealous in front of network television cameras.

Well, I’m sure Trumpty thinks that they don’t love America and they should go back to where they came from, too!
Which, in their own deluded way, is perhaps what they are trying to do.